The twenty-three (9 female, 14 male) students in the course engaged in a number of activities in support of this learning outcome. Reproductive strategies were also communicated via student presentations. Vegetative morphology was supported by a leaf shape field hunt. Identification of local plants permeated every outing, field trip, and hike. 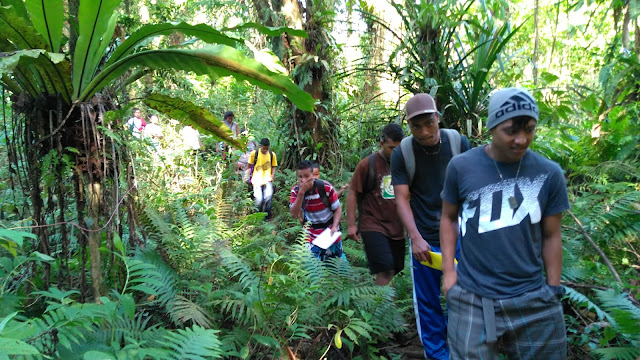 Asplenium nidus on the left. Cyclosorus maemonensis on the forest floor. Austin and Frankie on lead.


Twenty-two of the twenty-three students attended the field final examination exercise. One student had stopped attending class in the last month of the term.

The final examination involved a walk on campus and required the students to identify twenty local plants. The students had to identify the plants by Latin binomial, local name, and provide a specific cultural use for the plant.

The students had a list of 72 Latin binomials for plants found on and around the Paies, Palikir, campus to assist with the Latin name identification. 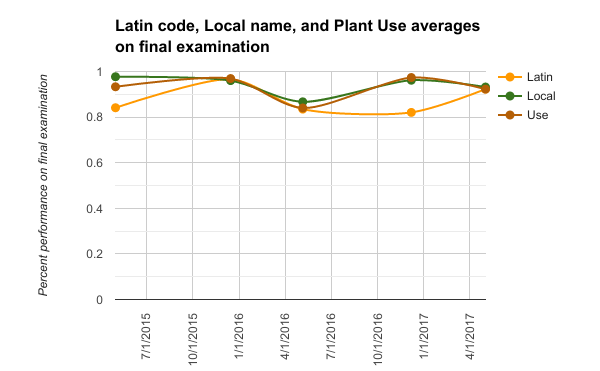 Collectively, the 22 sudents who took the field final examination made 406 correct Latin binomial identifications out of 440 possible identifications for an 92.6% success rate. This represented an improved success rate over recent terms and the highest success rate on the 20 plant version of the final examination. Fall 2015 included only 16 plants from a 56 plant list. The improvement may be due to the new flora for the course, this improvement may also reflect the development of an online "self-assessment" based on the flora in Schoology. 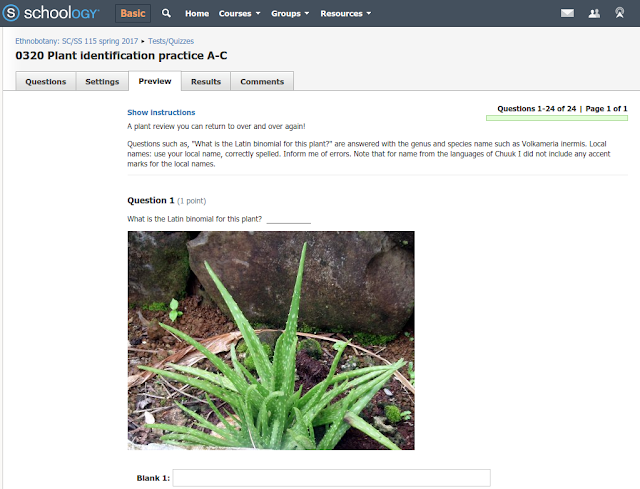 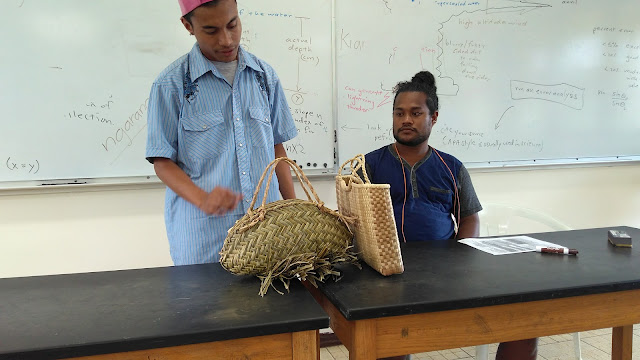 Alexander and Jelory with Yapese baskets

For the twenty plants on the final examination, the 22 students were collectively able to cite 406 uses for the 440 possible uses, a success rate of 92.3%


The essays were not analyzed this term. Only 10 of the 23 students in the course submitted the healing plants essay, 10 of the 23 submitted the material culture essay. Of the two sets of ten, six students submitted both essays, eight students submitted only one essay. A total of 14 students (61%) submitted one or both essays. The essays were intended to bring writing into the course. The essays, however, remain peripheral to the other many activities in the curriculum. Other ways to bring writing into the course should be explored, with options now available including the possible use of unmarked Discussions in Schoology to encourage writing or written reflection journal type assignments during the term. 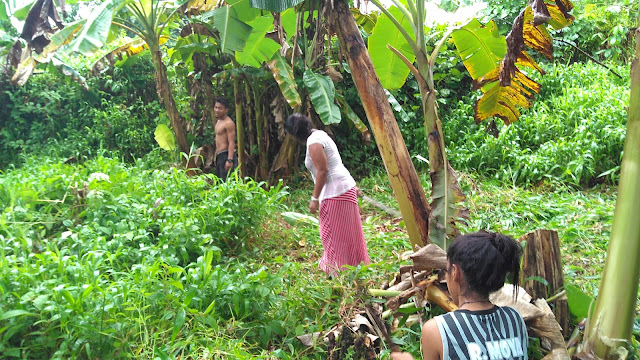 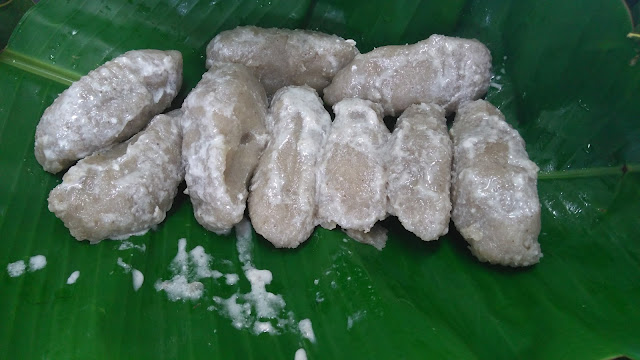 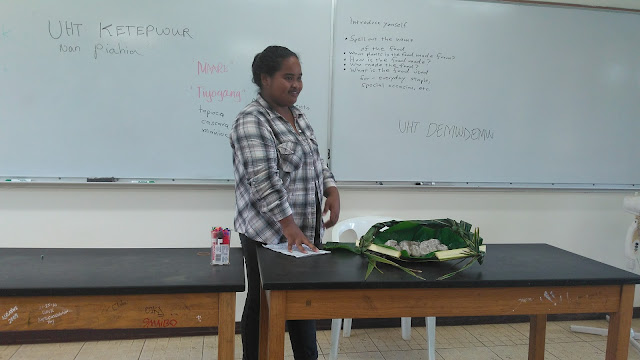 Junida with uht demwdemw, another banana dish listed on the left on the board 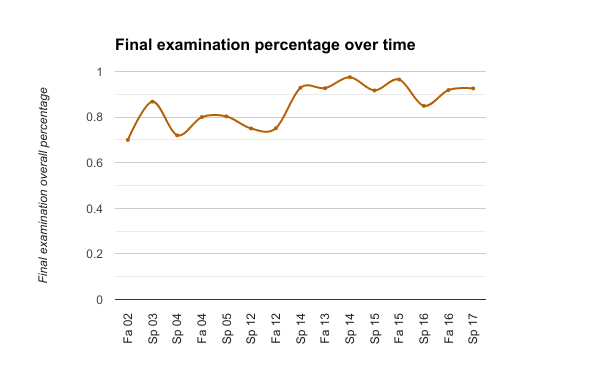 A longer time frame indicates that the final examination performance is fairly stable over the past five years. From 2002 to 2005 the course had a course content oriented final examination. From 2005 to 20012 (not shown on the chart above, did not yield percentages) the course ended with a final essay examination. In 2012 the course shifted to using the present format of naming plants and explaining their uses in a field final practical examination. In 2012 there were twelve plants on the final. This was later increased to 16 plants. Spring 2016 this increased to 20 plants. In the fall of 2016 the twenty plant format was retained. Each term the number of plants listed in Latin has increased, this term 72 plants were on the list.

Part of this increase in the number of plants is due to the intentional evolution of the campus and environs as a living herbarium. The conversion of the Pohnpei Campus Traditional Plants Garden to an agriculture/food crops focus has led to the development of the Palikir campus as an ethnobotanical garden and living herbarium.

A separate Insights into learning and course reactions in ethnobotany article noted that the students reported benefiting most from outdoor activities. Another article looked at student response to an online, open access mobile friendly ethnobotany textbook.

* The current course outline dates to circa 2007. In 2011 the college undertook reformatting all outlines at the college, but instructors were instructed to not change content at that time. That meant that the outline approved in 2012 was still the outline designed in 2007. In the wake of a decision to include the course as a required course in the two-year Agriculture and Natural Resources program, revised outline was prepared and submitted after 2012. As the outline document saw changes in the format specifications, the outline was appropriately modified. The reformatted outline was again submitted for consideration in the fall of 2016. The proposed outline has yet to be considered by the appropriate bodies. There has no been no change in the core student learning outcomes, the change is rather an addition of outcomes in light of the inclusion in the ANR requirements.
assessment ethnobotany