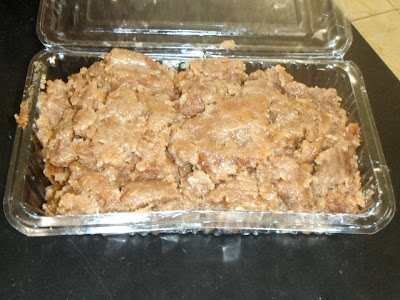 In traditional times on the outer islands the women had primary responsibility for tending the taro while the men handled fishing and climbing tasks. 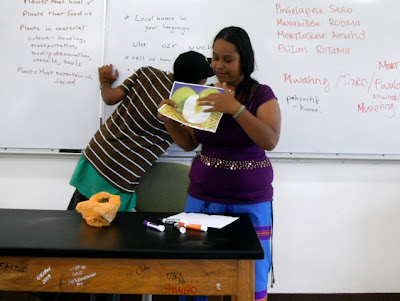 Joesen and Noeleen presented fermented breadfruit from the outer islands of Yap such as Woleai and Eauripik. The raw ingredients were actually brought in from Yap, Noeleen prepared the maare. 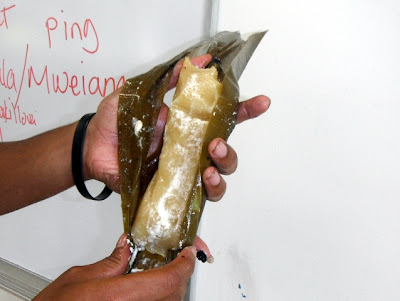 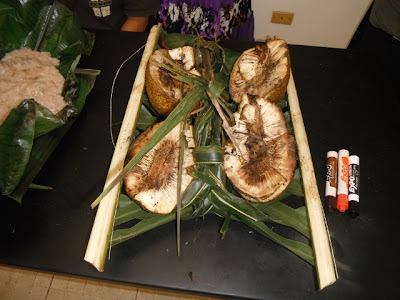 Pauleen, Barnson, Trisha, Verginia, Con-ray, and Maylanda from Kitti, Pohnpei brought in mahi umw, koahpnoair koakihr, and uht sukusuk. Above is breadfruit umw, mahi umw, one of the oldest of the traditional foods on Pohnpei. 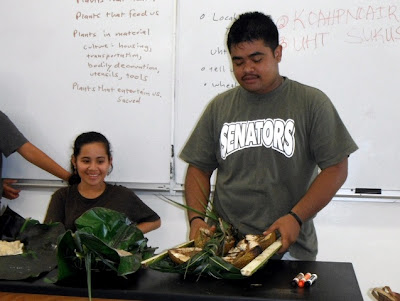 When presented in a traditional feast the number of breadfruit pieces must be 3, 5, or 7: an odd number. This contrasts with the four or eight leaf rule of healing plants. 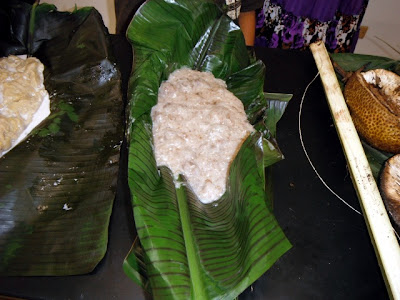 Maylanda (below) presented koapnoair koakihr (above) - ground, boiled yams with coconut milk. While taro is the food that marks a man a good provider on the outer islands and Kosrae, on Pohnpei yams define a real provider. The koapnoair koakihr combines both ground yam and small chunks of unground yam to provide texture and body to the resulting dish.

The dish is cooked in an oampwoat ("iron pot") using boiling water. This dish thus must have arisen after the arrival of cookware from abroad. The word for "boil" is pwoil. 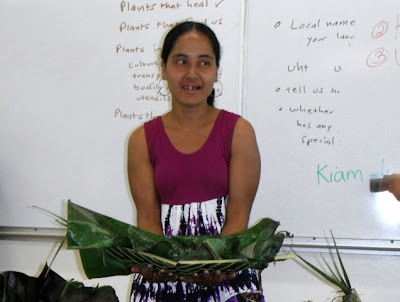 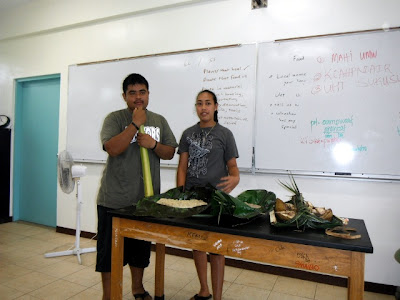 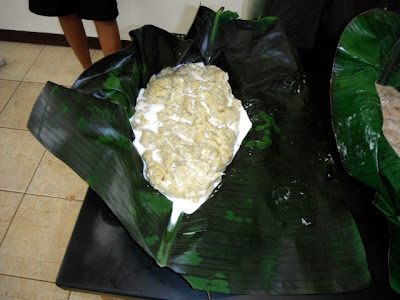 A palm petiole is also used to pound the uht. 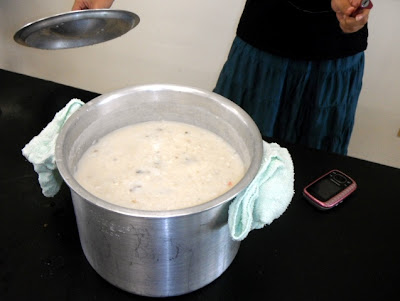 Neelma Pearl and RinaRuth brought in Kosraean "all-star" soup featuring in reef fish, crab, and lobster in a rice and coconut milk base soup. Although the soup could in theory be made by anyone, primarily Kosraeans produce this soup, although it is a favorite food for many others in Micronesia. The pot was quickly emptied, the soup was indeed delicious. 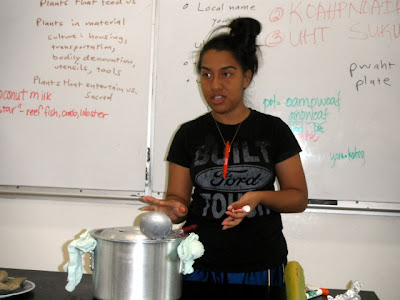 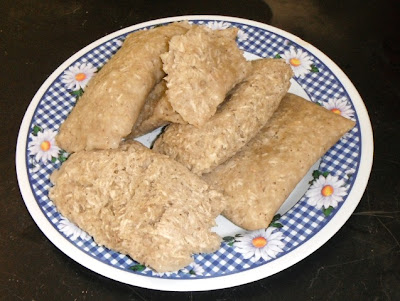 Lisa, Iniki, and Nordan brought in ground hard taro and coconut balls called uter or utoar on Pohnpei. On Kosrae the correct name is kuhlamihs, but some use the term often used with little children for the food, pahsruhk fihti (hard taro ball). This dish is known across Micronesia and is known on Woleai as yewagil (soft g), and puna in Chuuk. 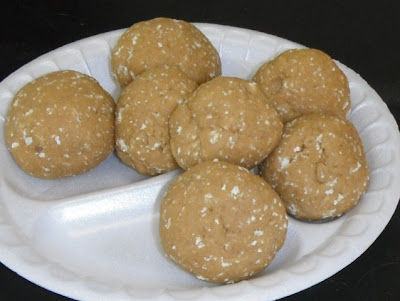 Kón is pounded on a wooden board called a nif, the pounding implement is a po. In the lagoon men pound, in the outer islands of Chuuk the women usually pound. 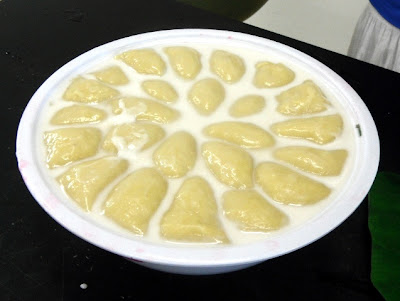 The pattern on top of the kón may be unique to a particular family.

A special leaf is used to cover the kón, the leaf of the soft taro plant. Specifically a species with a hydrophobic upper surface layer. The leaf has a meaning, the leaf sends the message letting wrongs roll off one like rain drops roll off of the hydrophobic surface. The leaf symbolizes peace and forgiveness. 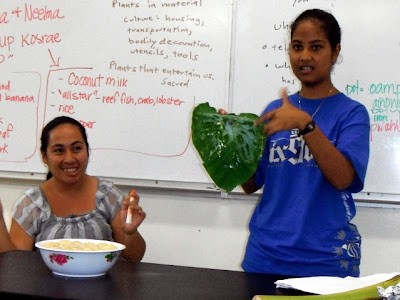 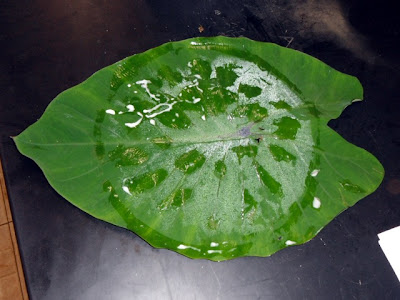 Many of the Micronesian cultures have formal apology systems. For Chuukese kón is part of this social system, for Pohnpeians sakau is at the center of an apology. The outer island Yapese send special hand spun and loomed banana fiber skirts.

The Kosraeans undoubtedly lost their original traditional forgiveness ceremony when the culture underwent the seismic shift of losing sunak (their traditional customs) and centering on the Congregational church of the 1800s. Forgiveness is now sought through public confession in church and sometimes more privately in mediated meetings between the families. 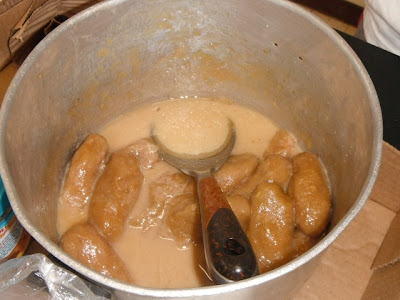 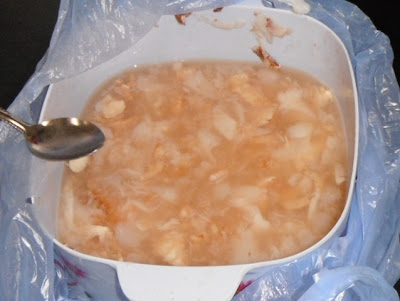