Showing posts from May, 2010
Show all

RipStik in the old bowling alley 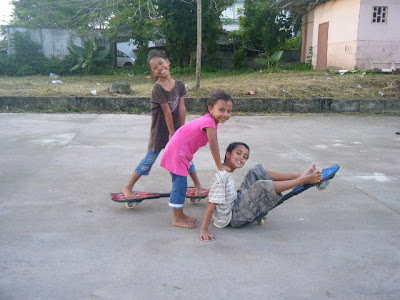 Turns out that the cement pad in Kolonia is the old sub-floor of the bowling alley. Dad can still fly left wing in RipStik formation. Sort of. She's got the look... Three abreast practicing formation flight My son was watching the x-games the other evening and I noted that almost every event is a "look at me-me-me" event: a solo event on a skateboard, snowboard, bicycle,... Because you can propel the board without getting off, and because you can turn on a literal dime, the caster boards open whole new event possibilities. Formation work like ice dance groups do, ball sports such as basketball - yes, young boys can dribble and ride - or variations on polo and field hockey.
Post a Comment
Read more 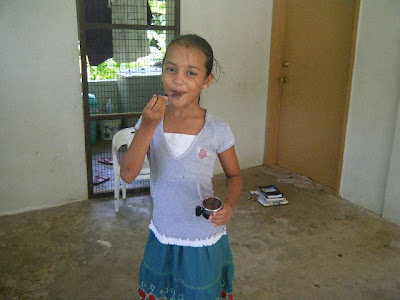 What teachers and students need to demonstrate

In the article Seeking - and Finding - Good Teaching by Julie Sweetland in The Obama Education Plan: An Education Week Guide, quality teachers are not found by using "hastily scribbled, ill-defined checklists that are the most common form of teacher evaluations - and which often aren't really evaluations at all, but instead a tedious chore that neither administrators nor teachers enjoy, value, or trust. Rigorous classroom evaluations aren't just someone's opinion; they are carefully conducted qualitative assessments that meet research standards for clarity and transparency. They guide trained observers to look for specific indicators of excellent instruction: effective questioning that pushes students to think critically; the ability to foster a positive; productive classroom environments; the use of engaging lessons that draw students into the learning process."

When I took on SC 130 Physical Science in the fall of 2007 my intent was to shift from a course with a 108 "fun facts to know and tell" outline to a focus on science as a process, the mathematical models under physical systems, and writing. I shifted from a course that focused on an accumulation of facts to a weekly focus on a central concept in an area of physical science. The laboratories became the focus of the course, concepts moved to the fore and memorized knowledge was de-emphasized.
During the all-too-brief break between spring and summer session, I read The Obama Plan: An Education Week Guide, 2009. In a November 28, 2007, article by Sean Cavanagh titled Scientists Nurture Teachers' Growth, Cavanagh relates the importance of concepts over memorization for Douglas W. Higinbotham, a nuclear physicist with the Thomas Jefferson National Accelerator Facility.
Douglas W. Higginbotham, a  staff scientist who has worked with teachers in the [Academies Creating Teacher Sc…
Post a Comment
Read more 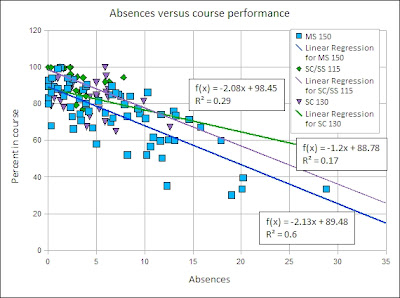 I ran a linear regression to examine the relationship between overall course performance and attendance in MS 150 Statistics, SC/SS 115 Ethnobotany, and SC 130 Physical Science. In the following chart, the number of absences is plotted against the overall course percentage for that particular student.

SC/SS 115 had a correlation coefficient of -0.54. This is a moderate negative correlation. Attendance remained important, but less so compared to MS 150.

SC 130 had the lowest correlation coefficient of -0.41. While this is still considered moderate correlation, othe…
Post a Comment
Read more

Seen around campus and home 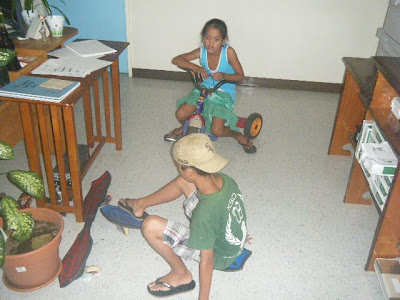 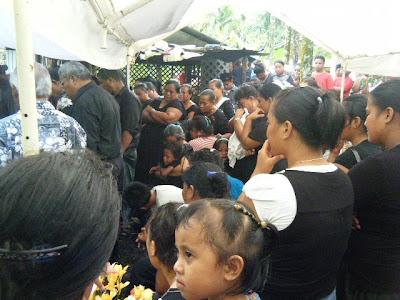 Ahser Edward passed away on Friday 21 May while visiting his home on Pingelap. He was buried at his home in Kolonia amidst great sorrow. Graveside service. Ketiner Kenneth with the song book. President Spensin James. Some of Ahser's children in the background.
2 comments
Read more

HTML5 in service of a course calendar

May 25, 2010
I am building my SC 130 Physical Science summer calendar in XHTML5. The calendar is a work in progress and will evolve continuously throughout the term. Not all features are operational as yet. The beast is done completely in XHTML5 using SVG to build the first table. This was necessary to get the graphic effects used for the written labs. I am certain this will take some explaining to the students day one - I will print the page out and hand it out as a syllabus and calendar. The effort is probably greater than the payoff, this is a one-off just to see if I could make a concept become a reality in XHTML5. In the same vein as Mark Twain noted, those of us who are not paid to code find a relaxing hobby in coding. The tool used to build the page is nothing more than a text editor, specifically NotePad++ on Windows which color codes the XML making finding errors easier. On Ubuntu Linux I use the Gnome gEdit which also color codes.
Post a Comment
Read more

May 25, 2010
The following is the note I first sent to my physical science students January 2010, there are some provisos in my original blog entry.
This particular blog entry is really self-intended, this is my own bizarre filing system so that I can find this again next term. Think of this as a first day hand out, only this hand out goes out via email. In the blogosphere the running joke is that most blogs are read only by the parents of the blogger, an audience of one or two at best. My own pathetic audience count is zero: I am writing as a record for my own future use. Next term, should I live so long, I can copy and paste this into a future email. Thus utilizing the cloud as a filing system. Maybe someday simply teaching in the cloud...
You are receiving this email because you are on the pre-registration class list for SC 130 Physical Science summer 2010. Please pardon me if this is in error or if your plans have changed. I will send this note out again after registration to the final first da…
Post a Comment
Read more 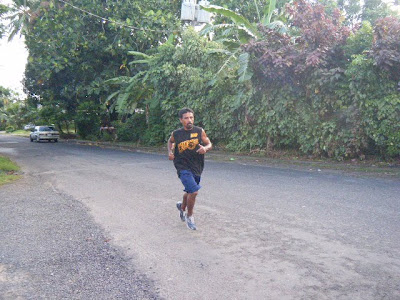 Rendy finished first, something I do not usually get to see, but a spare photographer was on hand this morning. I was not directly behind Rendy, not even close, although I was the first 50 and over runner across the line in 28:44. For what little it is worth, I was the first (as well as last) joggler to cross the finish line. I have been first in my "division" since I started running and juggling the local 5k runs, an unbeaten record of wins in the division. Being the only joggler on a remote island makes this possible. I finish first no matter when I finish, as long as I finish with all three juggling balls under control.
That said, I was spurred on this morning by this being the first run for which I had a sponsor. In the spirit of Olympism in Action, the FSM National Olympic Committee provided entry fee support to myself and my two participating children in the event. Many thanks to the Olympic Committee! My son overheated some in fierce mixture of sun and the saturated mor…
Post a Comment
Read more 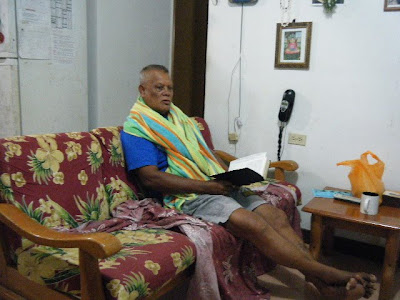 Morning service led by Pastor Nena started a day of fond farewells. This is the season of people leaving, the time after graduations when friends and family spread their wings and head off into the sky. Two to travel, one to Kosrae, one even further. This gang of three will not be together again for a while to come. Another voyager headed away from home for the summer.
Post a Comment
Read more 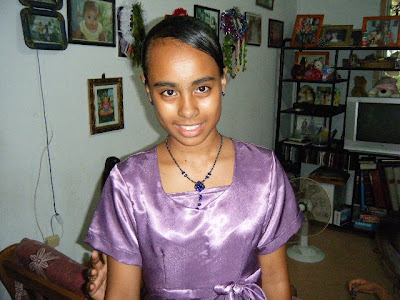 All ready to graduate in purple. Lieutenant Governor Churchill Edward was the commencement speaker, seen here congratulating our graduate. Some of the happy graduates. Family and friends.
Post a Comment
Read more 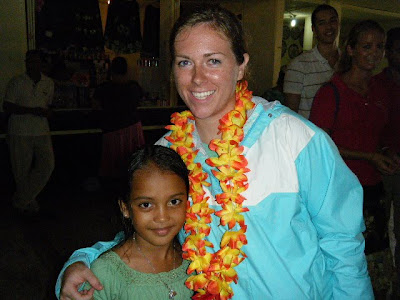 My youngest's teacher for the past year departs Pohnpei to return to big island called North America.
Post a Comment
Read more 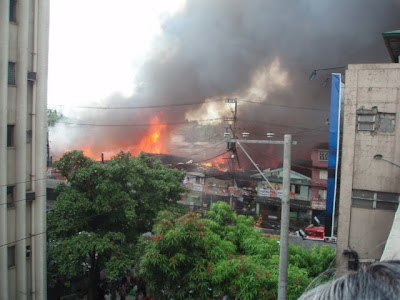 Upon her arrival in Quezon City last fall, two typhoons and the worst flooding in the history of Quezon city struck. This spring I assured her that things would be better. Upon her arrival the shanty town across the road burned, over a thousand homes were lost in the blaze. Quezon City might want to consider paying her to not go there. Yonis enjoys a meal with Senator Rensper Luey of Pohnpei. Shrue out and about in Manila. Lyle was a huge friend, a true peneinei, visiting the girls twice during their month in QC. Lyle and his family treated them to a fine meal at SM Mall. Huge thanks. He also introduced my wife to cassava cake and Buko pie, both of which are actually available at one of the bakeries on Pohnpei. Shrue noted that the cassava cake here on Pohnpei is not as good as that in the Philippines - food is always better at home!
Post a Comment
Read more
More posts