Showing posts from March, 2011
Show all

March 31, 2011
MS 150 statisticstest three includes some material that is not subsequently covered on the final examination. The material that is not covered are normal curve calculations that provide a foundation for the t-distribution and subsequent consideration of confidence intervals. Some of the student outcomes on the outline must be assessed by test three. Course learning outcomes 2.1 and 2.2 are assessed during test three.

Test three consisted of 14 questions based on a small 12 item data sample. 73 students sat for test three. The fourteen question test was worth 15 points, two for the final question which involved citing a confidence interval. Overall performance was an average of 71% on the test The median test score was 80% correct.

The first three questions were basic statistics that the students calculate on almost every quiz and test.

Questions four and five cover material the students have not seen since midterm about a month ago, these are effectively a measure of retention of mate…
Post a Comment
Read more 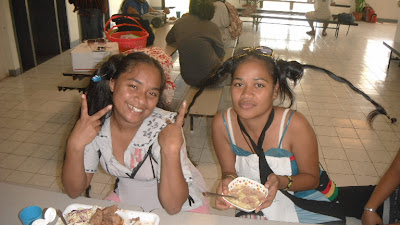 Spirit began with crazy dress day on Monday.
Seen in the cafeteria, Mayleen sporting the deadliest Pippi Longstocking hair style.
Tuesday was cross-dressing day. By coincidence the Upward Bound students were also on campus. The director of Upward Bound joins in a group photo with some, uh, lovely Chuukese co-eds and a bearded old lady.
Culture day is really the highlight of Spirit Week, the day that is visually like no other Spirit week at any other college on the planet. Mylinda displays her Chuukese heritage adorned with Asplenium nidus about her waist, Cordyline fruticosa around her midriff, and Nephrolepis ferns on her arms and head.
A Pohnpeian wearing a traditional koahl, using a kiam to carry his books. A scene from early in the 20th century.
Culture is a moving target, an evolving, living and breathing entity. Debra wears what might now be considered a classic look from twenty-five to thirty years ago.
Outer island Yap.
Renee wears church traditional wear.
I too attempted to find some…
Post a Comment
Read more 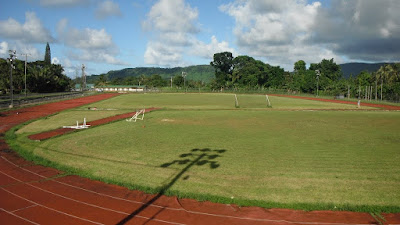 Running. Sun Behind. Bridge ahead. Three orbs up. Winded. Pushing. Cross the water. Cross wind. Far Side. Turning. Back. Into the face of a shining sun.

A run to the bridge heads down from capitol hill towards the intersection of Kaselehlie and Elenieng
Geolocation
At the middle of the bridge I realized that if one has made the effort to get to a bridge in life, then one should, at the very least, cross the bridge and experience the other side. I cross fewer bridges now th…
Post a Comment
Read more 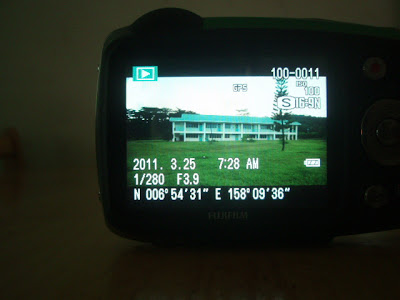 Recording an image of a plant and the location of the plant has meant hauling around a camera and a GPS, and then later adding in the geolocation information to the photo. Until now.
No doubt about the location of an image when the extended image data includes the latitude and longitude.
The FujiFilm FinePix XP30 GPS, satellite enabled. The real fun is that the camera can "track back" to a stored photo location. I will be wrestling with image sizes, however. 640 x 480 is not directly available in shooting mode.

The smallest image is a 1920 x 1080 pixel 16:9 ratio image. I know the image appears smaller, but click on the image to see the original size. And to think I first utilized 200 x 150 pixel images from a one thousand dollar Sony DSC-F1 in 1998.
Pwisehn Malek after 1998 El Niño grass fire
Now for a quarter of that cost I can shoot 14 megapixel geotagged images. Change is the constant. 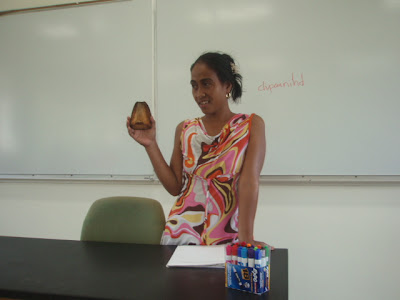 Material culture presentations in SC/SS 115 Ethnobotany.
Jackleen presents a coconut husk scrubbing implement called a dipoanihd in Kitti, Pohnpei. The dipoanihd is used not to clean sakau of dirt per se but rather to remove fungal and other growths that would add an extremely bitter taste to the sakau.
Vanessa gestures to indicate the actual size of a dil kahlel, a torch made of coconut leaves which is used to attract flying fish during night fishing. Flying fish season is March, hence March is also known as kahlek - dancing month. The men dance with their torches in their canoes out on the water while the women prepare land based starches at home. When the men come in a late night family feast is in order.
A dok kemelis used for pounding hard taro. While the men "dance" in their canoes during March to catch flying fish, the women pound giant swamp taro getting ready for the special meal which will follow the fishing.
Angelo brought a model of a pelek from the library, a copra …
Post a Comment
Location: Pohnpei, Micronesia
Read more 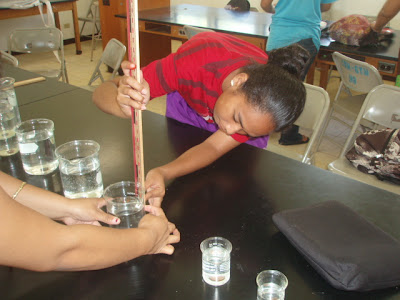 Laboratory ten began with an investigation of the relationship between the distance of an image behind a mirror versus the distance of the object in front of a mirror.
Sinforsa works on the apparent depth of a penny
This term I lined up all of the beakers, the bucket, and large graduated cylinders, from zero water depth to 50 cm water depth.This seemed to work well, especially if the students started from the deepest penny.
LillyAnn and Brilinda measuring the image distance in a mirror.
Bersin working on the apparent depth of a penny in water.
ShirleyAnn works with a figurine. She postulated that the image distance would be less than the object distance, thus the slope would be greater than one. The Ardos-Alfons theory stated that the object distance is equal to the image distance. Angie confers with Nancy Tracy Ann Silver Rose Patsipa and Tracy Peter Johnson and Jeremiah
Post a Comment
Read more
More posts