July 24, 2017
Day one of the Pohnpei Department of Education mathematics content workshop focused on Algebra I. Morning attendance was eleven, with an additional member joining in the afternoon. After a brief opening ceremony and warm welcoming remarks by the coordinator of teacher training, the mathematics teachers adjourned to a classroom at Pohnpei Islands Central high School.

I began the day with Al Jabr, a concrete system modeling mathematics that I use with early algebra students to cover a wide variety of mathematical and algebraic concepts. 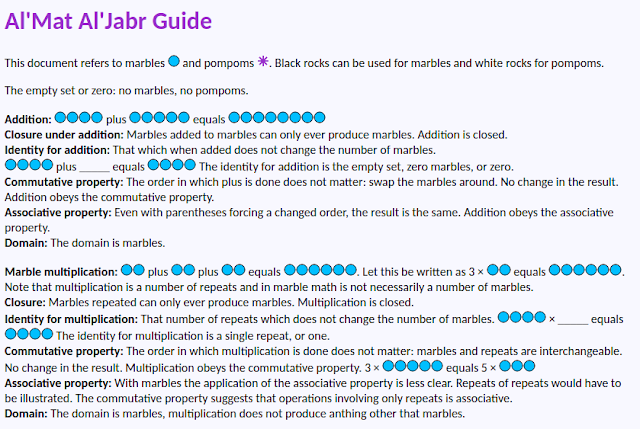 I began with arithmetic, using basalt rocks for positive integers and coral pebbles for negative integers. 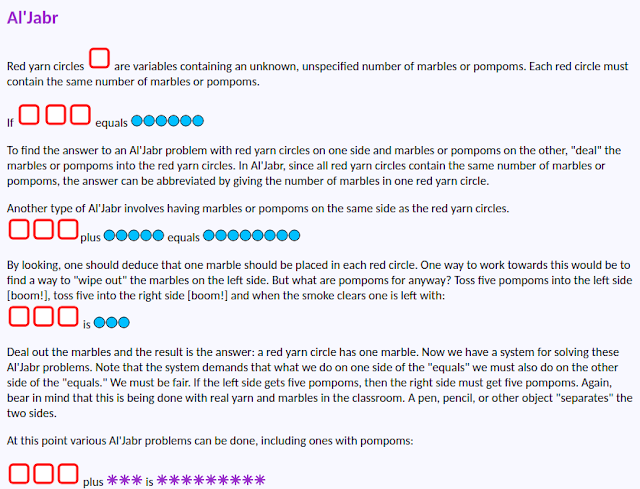 The expansion to yarn circles permits the working of single variable problems. An egg carton was used to extend to quadratic functions. 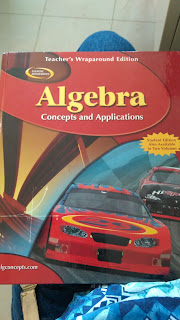 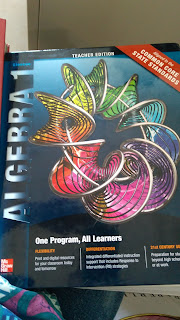 I learned during the morning that all of the Algebra I classes at all of the high schools were using Glencoe's Algebra: Concepts and Applications from 2006. 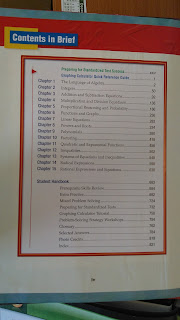 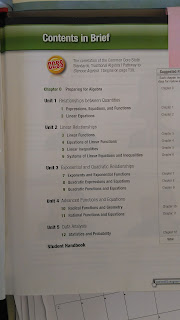 I also learned that, varying with the capability of the students, classes generally reached chapter nine polynomials or ten factoring in this text. Chapter eleven introduces quadratics, those are presently reserved for Algebra II.

The current mathematics standards for Pohnpei state were written in 2012 and reflected the mult-decade trend to de-emphasize manipulations and focus instead on linear and quadratic functions and relationships. One single class at PICS uses the circa 2014 McGraw Hill Algebra I Common Core edition which is more closely aligned to the 2012 standards. A cross-walk of the standards versus both texts is available on line.

Ultimately instructors will follow textbooks. Textbooks are written and designed to provide mission critical support to instructors. Designers of standards might wish and hope that instructors will "fill in the gaps" between their standards and the textbook, but the realities of teaching loads and the numbers of students leaves instructors with insufficient time to develop materials to fill "gaps," let alone figure out where to sequence gap filling curricula within the framework of using the text.

The bulk of the Algebra I standards are found chapters five and higher of the older Glencoe text as shown on a second tab of the cross-walk. All I could suggest to the teachers is to de-emphasize this material, compress the material as much as possible. I noted that I realized their students might not arrive with the proper foundation in mathematics, but I suspect that some of this apparent lack of preparation is an effect I have long studied at the college: students arriving in SC 130 Physical science who have completed MS 100 College Algebra and MS 101 Algebra and Trigonometry still struggle to determine the slope of a line on a graph. Success rates in different terms have varied, 65%, 36%, 25%, even as low as 21%, Yet this is a pre-requisite skill in both courses. How can students who have passed those classes still be unable to calculate a slope for a direct relationship where the slope is simply the rise over the run?

Curiously enough, I use this to argue that the concept of "pre-requisite" skills and math as an edifice built up from blocks of knowledge is not the appropriate way to view a learner of mathematics. That is not apparently how mathematics is actually learned - as students manage to pass higher classes while losing knowledge from earlier classes. If mathematics were as sequential as a common perception in the field, then students could not succeed in subsequent classes as well as they do. And indeed, after quadratics are introduced in algebra, very few algebra instructors ever utter the word "slope" again. An algebra student can be forgiven for thinking that a parabola has no slope nor intercept. Both words almost magically vanish from most textbooks. That the slope is 2ax+b is thought to be something that cannot be introduced until a student has encountered calculus - that is the "proper" sequence. Yet the ability of algebra to simply move on and not mention slope and intercept again supports the argument that math, at least as taught, is far less sequential than one might think.

Thus I argue that one could compress far more material than one might think, and that conceptual hooks provided by models such as the Al Jabr model above also provide ways to move through some material more quickly. Adding like terms becomes "adding rocks to rocks, yarn circles to yarn circles, and egg cartons to egg cartons."

I wanted to try to show how one might move directly from plotting (x y) points to linear equations directly. I had a teacher roll a ball, another teacher the seconds out loud, and five other teachers track where the ball was at n = 1, 2, 3, 4, 5 seconds. Each teacher was assigned a second. This meant I could measure with a tape measure the distances afterwards. The basic set-up can be seen in a blog article from August 2013.

I then made a table on the board, and sketched a very rough graph on the board. I noted that y = rate*x+startValue is the usual way a physicist sees these equations. I worked out the slope from rise divided by run. The graph was not measured, just a hand sketch. Later I would put the data in Desmos and was pleasantly surprised to see that I had, almost accidentally, obtained the correct slope. 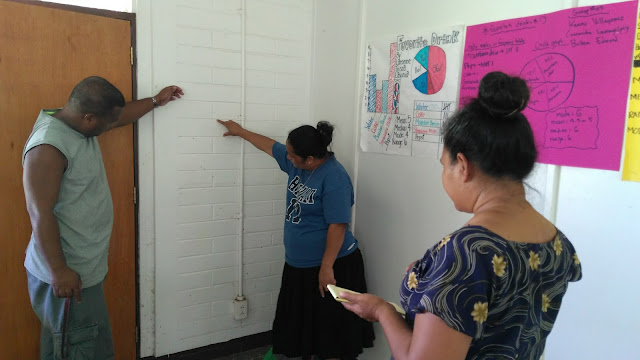 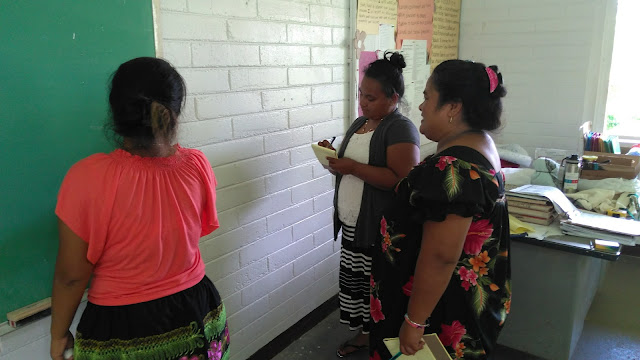 I then showed the class Desmos on my smartphone, showing how I could enter a table and then run a regression without WiFi. The data and graph are available on line in a Desmos chart.

At this point the classroom was tropical afternoon warm, and I could see that we were all getting a tad woozy and perhaps dehydrated. After a wrap-up discussion, we broke for the day.
education mathematics