August 16, 2016
Underneath the focus on physical systems, SC 130 Physical Science is built on a foundation of connecting physical systems to their mathematical models and communicating the results in writing. Laboratory exercises lead to the writing of a full laboratory report that is marked for content, syntax, grammar, vocabulary, organization, and cohesion.

The majority of the laboratories investigate systems that involve a linear mathematical relationship. Reports include xy scatter graphs, best fit linear trend lines, slope, and y-intercept analysis. The course outline includes the learning outcome, "Students will generate mathematical models for physical science systems." This serves a general education program learning outcome, "Students will be able to present and interpret numeric information in graphic forms," which in turn serves an institutional learning outcome for quantitative reasoning: "Students will be able to reason and solve quantitative problems from a wide array of authentic contexts and everyday life situations; comprehend and can create sophisticated arguments supported by quantitative evidence and can clearly communicate those arguments in a variety of formats."

Twenty-three of the twenty-six students enrolled in physical science fall 2016 were present the first day. These 23 students completed a pre-assessment consisting of eleven questions which focused on interpreting and generating numeric information in graphic forms. The pre-assessment graph interpretation and data interpretation both use direct linear relationships with a y-intercept of zero - arguably the easiest form of relationship to work with in algebra. 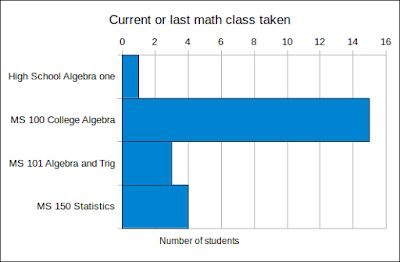 The students have a more than sufficient mathematical background to handle the pre-assessment. The pre-assessment questions are early high school algebra one level questions. The one new freshmen student who has had only algebra one back in high school correctly answered nine of the eleven questions, a far stronger performance than the students who had college math courses. Twenty-two students have either taken MS 100 College Algebra or placed into MS 101 Algebra and Trigonometry. Seven students have had a post MS 100 College Algebra course, either MS 101 Algebra and Trigonometry or MS 150 Statistics. The students should be able to easily answer a strong majority, if not all, of the questions. 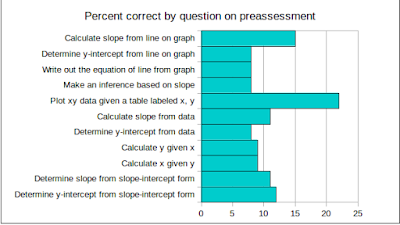 The question most commonly answered correctly was the plotting of paired xy data presented in tabular format. Twenty-two of 23 students successfully plotted the points on a provided graph. Only 15 of 23 could calculate the slope of a direct relationship based on a line on a graph, a simple rise over run calculation. When given data in a table, the ability to calculate the slope fell further to only 11 out of 23 students. Only nine students could use the table to arrive at an equation and then use that equation to calculate a y-value given an x-value, or an x-value when given a y-value - the very core of the usefulness of a linear relationship.

Term upon term the pattern of students who have completed MS 100 College Algebra being unable to handle high school algebra one level mathematics has persisted. My own personal take on this is that mathematics does not provide the concrete systems upon which the mind can built the cognitive hooks and framework necessary for the abstract mathematical knowledge. Pure algebraic mathematics as a separate subject does not produce long term learning and comprehension. And, no, the "real world word problems" in each section of a math text do not constitute concrete systems for building the needed cognitive structures. The problem is not a failure of instruction but of the inability of mathematics in isolation as a vehicle for teaching quantitative and mathematical thinking.

SC 130 Physical Science is designed to address these mathematical weaknesses. The course has as one of its intents the placing of the mathematics into less abstract contexts. The concept is that the laboratory systems and data might provide cognitive hooks on which the students can attach a stronger comprehension of linear mathematical models.

Laboratories one, two, three, four, five, seven, nine, eleven, twelve, and fourteen involve linear relationships between the variables being studied. Non-linear relationships are also generated by some activities in the course. Although the students use spreadsheets to obtain the best fit trend line, the students are still working with concrete systems with variables that are related linearly.

The students do not "work problem one to thirty even" but rather focus on a single relationship each week, one equation in each laboratory. An equation that has a physical meaning and interpretation, with parts that also have real world meanings. A volume versus mass slope greater than one gram per cubic centimeter leads to soap sinking, less than one gram per cubic centimeter and the soap floats. The slope of the relationship tells the students what the soap will do when placed in water. One equation is studied in detail.

Mathematics should be taught in context on an "as needed" basis, a "just in time" deliver that ensures the learner is both in need of that piece of mathematics and has a use for that mathematics.

Although fall term 2016 is only just beginning, historically performance improves markedly from the pre-assessment to the post-assessment. Whether students then retain this knowledge through to graduation, or beyond, remains an open question.
assessment mathematics physci