September 12, 2018
In the spring of 2018 presentations on arc equations eliminated this height versus velocity exercise in SC 130 Physical Science. Fall 2018 the students had all arrived at the same equation very quickly on the previous Friday, in stark contrast to the prior spring when students did not arrive at a common equation or approach to an equation. This left time to run the height versus velocity experiment last done fall 2017.

A review of my blog indicated that a 150 centimeter speed trap for all heights would be necessary to avoid the speed trap length becoming a confounding variable. I also knew that the heights remained suspect and thus I remeasured all of the heights using yarn and a level. 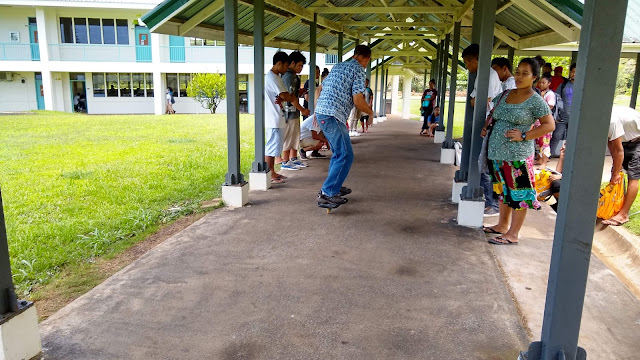 Remeasures were done for all posts. 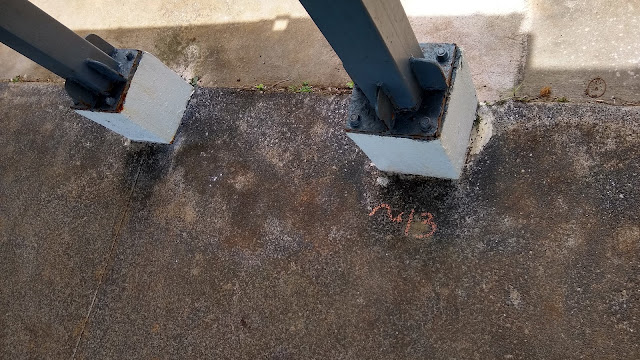 The lowest and first run was deemed to be from 0.13 meters 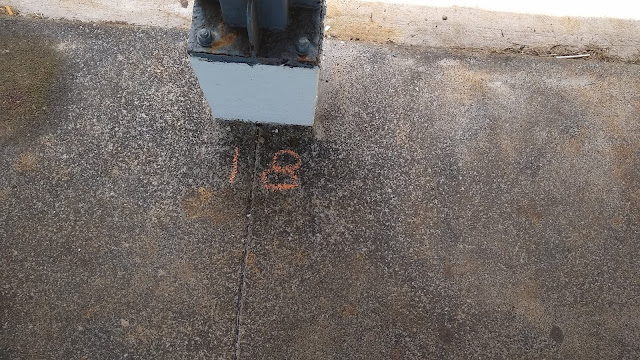 The next post set up was measured at 0.18 meters vertical drop. 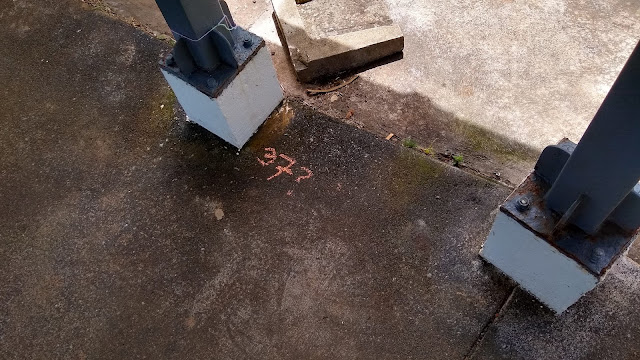 The third set of posts was 0.37 meters 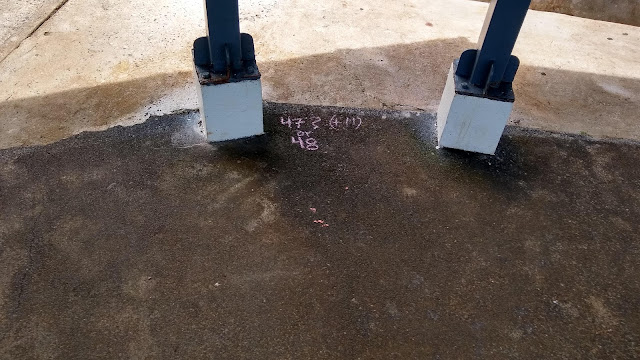 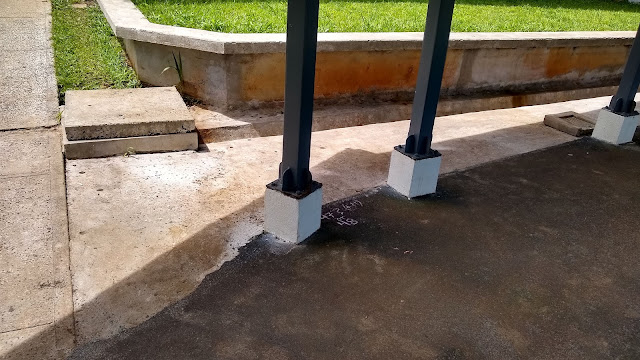 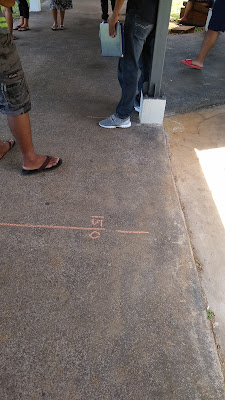 The speed trap was kept constant at 1.5 meters in length, as recommended spring 2017. This does seem to improve results, despite the speed that the 0.48 meter drop generates. 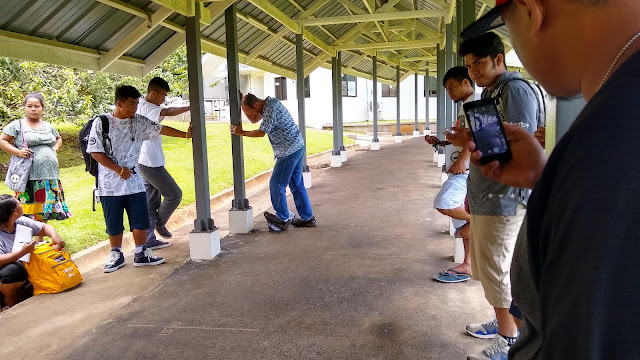 All starts were from a velocity of 0 m/s, or as close to zero as I could get. The bottom is 0 meters high, 0 meters per second. 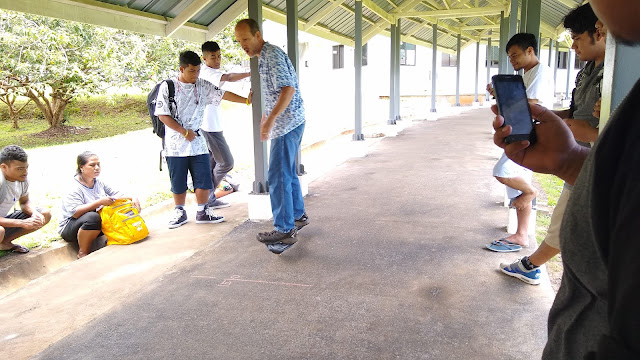 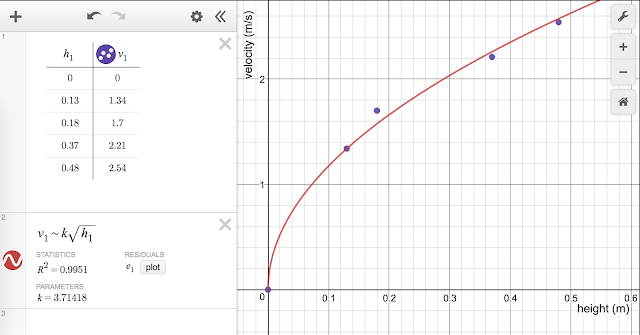 Data in Desmos fitted with square root regression. This is Desmos strength in science classes: the ability to regress against any function. The coefficient, predicted to be up around 4.4, is not that far off from the theoretical value. Velocities are in meters per second this term, heights are in meters. This has worked sufficiently well thus far.

On Wednesday the banana leaf marble ramp did not go as well as I might have hoped. The data had a high amount of linearity. This term I remembered to bring uten ruhk from the house, but the leaf would prove to have a fairly serious twist. There still appeared to be high amounts of rolling friction in the groove, perhaps a superball would be better. 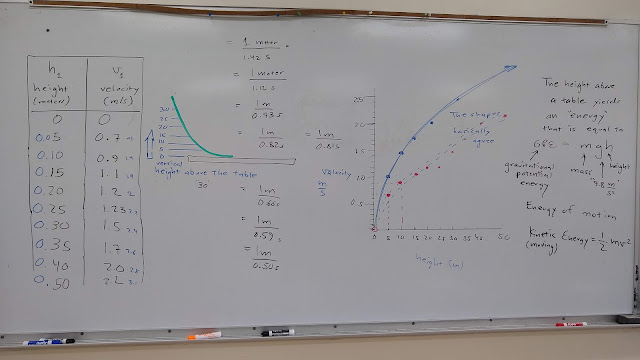 There is no image of the banana leaf marble ramp set up, but the set up was fairly standard. I used a one meter long speed trap. Due to the past recommendations to not lengthen the speed trap (a confounding variable as the marble slows on the table top), I was limited to a half meter of drop (the times were under half a second at that point).  I did graph on the board as recommended last year, but ultimately the data just did not clearly show the square root relationship.

Recommendations for the future would include using a 1.5 meter or even a 2.0 meter speed trap despite the velocity loss associated with the slower marble speeds from the lower heights. The marble was still experiencing a lot of groove track friction, perhaps a superball would be a better choice. The banana leaf should be more carefully inspected to ensure that the leaf is not rotationally twisted. The uten ruhk was large, far larger than I actually needed, a smaller straighter leaf might have been a better option. The groove would be smaller, but having a marble be able to roll on top of the groove, or a superball, might, again, be a better option.

The activity remains worthy as a demonstration of way to show this height versus velocity relationship without a RipStik. And there have been terms where this demonstration went well. Pre-marking the leaf ahead of class is not always possible, but this did speed up the measurement process.
Desmos physci