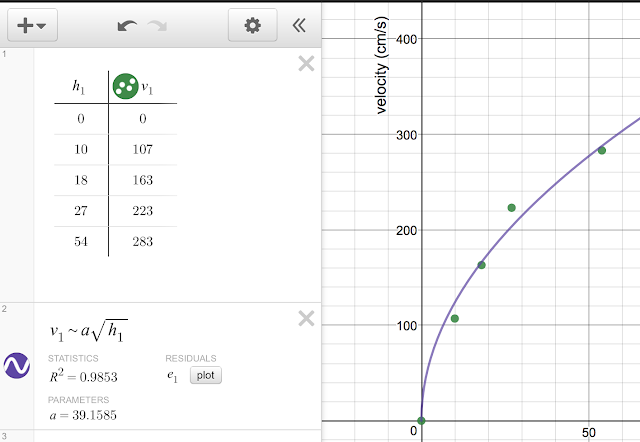 As recommended last spring, I shifted to a 150 centimeter timing distance at the bottom of the slope. The 150 cm ran from 150 ahead of the zero elevation down to the zero elevation point. This does not produce the true velocity at elevation zero, my need to carve off towards to the east and bail from my board does not really permit a more optimal measurement.  The 150 cm track proved useful, as did the use again of three timers, another development from spring 2017. The 283 cm/s run was 0.53 seconds across the 150 cm. Were the speed trap to be any shorter, the timing would be plagued by reaction time errors.

The use of 150 cm for all elevations removed the length of the speed trap as a confounding variable. With the possible exception of the 223 cm/s speed from 27 cm, the data laid out nicely along a square root relationship.

For the 54 cm height I paused, cranked Avicii Levels on my Motorola Moto G4 Play, holstered the phone leaving it running at full volume, and then made the run with Levels blasting from my hip.

Wednesday's banana leaf marble ramp is almost anticlimactic given that Monday has revealed the non-linear nature of the relationship. 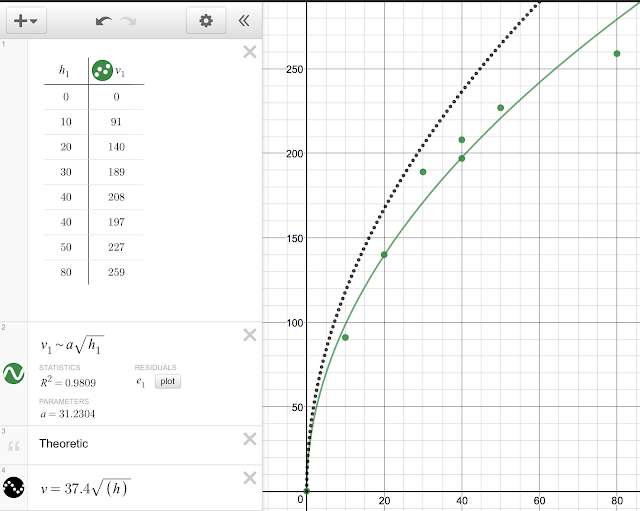 The class, however, when asked what the speed would be for 20 centimeters, dutifully doubled the ten centimeter speed. The students had returned to a linear model, or perhaps never dropped the linear model. Note that I should not have used "a" for the coefficient here. The students rightly thought that a represented an acceleration, but the graph is height versus velocity, "a" is the square root of twice the acceleration of gravity. Perhaps 2g should simply be left under the radical. At the very least some other constant such as k might be used. 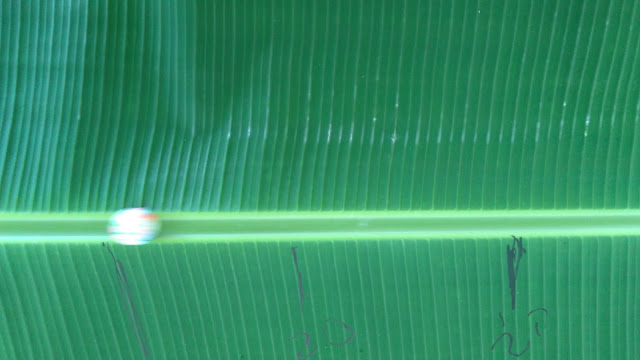 A small superball was used on the banana leaf "marble" ramp. The speeds were measured across 100 cm up through a height of 40 centimeters. Then the speed trap was lengthened to 150 cm and the 40 centimeter height run was repeated. There was a loss of 11 cm/s for the 150 cm speed trap. For each speed three times were taken and the median time was used. 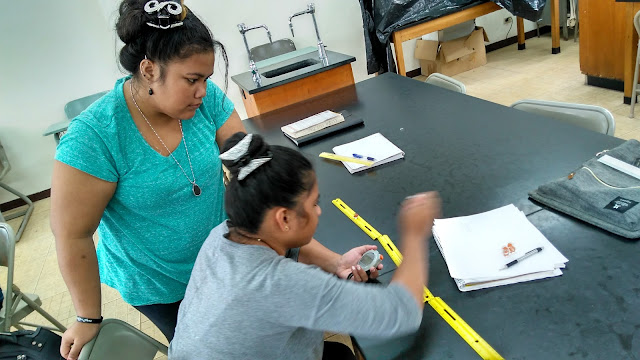 Laboratory four this term was structured again around a discovery learning set of questions to be investigated. Whether a class actively engages with the laboratory varies from section to section, from term to term. Sometimes a class really engages with the activity, other terms the group dynamics drive a tendency to only answer the specific framing questions and not engage in a broader exploration of the laboratory. 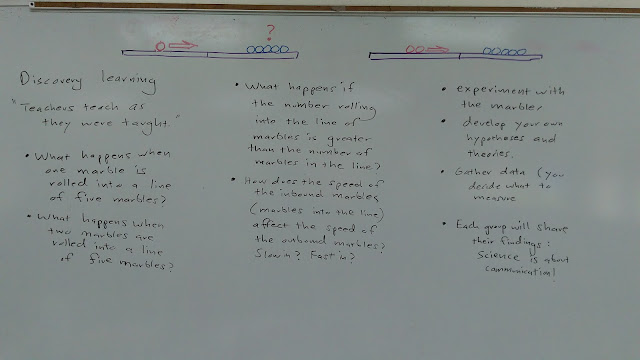 This term I opted for perhaps a little more structure up front, but not a lot of structure. I again posed questions as hypotheticals, I did not demonstrate the system. The students were generally convinced that all of the marbles would move post-collision. This makes the discovery of the conservation of momentum within the system surprising. 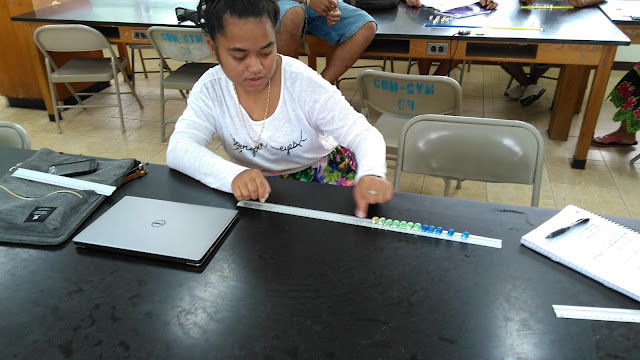 Some groups spontaneously go beyond the framing questions and explore in more depth. 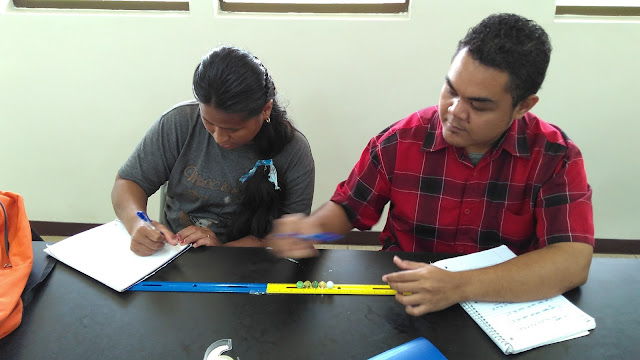 There is always a certain amount of group think that occurs. This term I chose to bring stopwatches. When one group asked for the stopwatch, the other groups followed suit. In an earlier image Elisa and Elymore can be seen trying to replicate laboratory two and obtain marble speeds using split timing approach. Each term the decision to bring or not bring stopwatches is a tough one. Even if one manages to time the inbound and outbound marbles over a fixed distance, the only result is that speed is always lost in the collision. I attribute this to spin down of the inbound marble(s) and spin up of the outbound marble(s). Mass is more demonstrably conserved, but spin is not, and the loss is primarily in the velocity portion of the kinetic energy equation. Sure, Newton's pendulum is a solution to this, but I want a simple system that could potentially be used in any elementary school. If I omit mention of timers, then the groups usually settle on tables of the number of marbles inbound versus the number of marbles outbound. Oddly enough, despite the presence of the mass balance, they do not usually attempt mass in versus mass out. 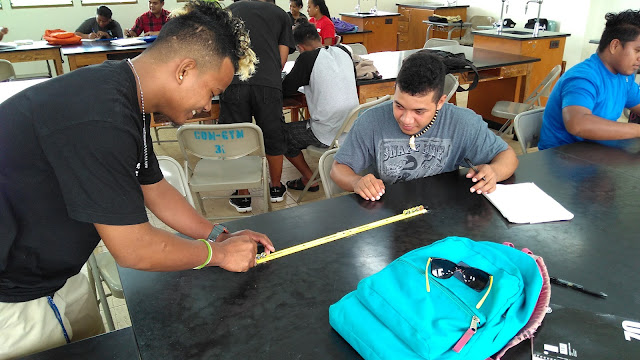 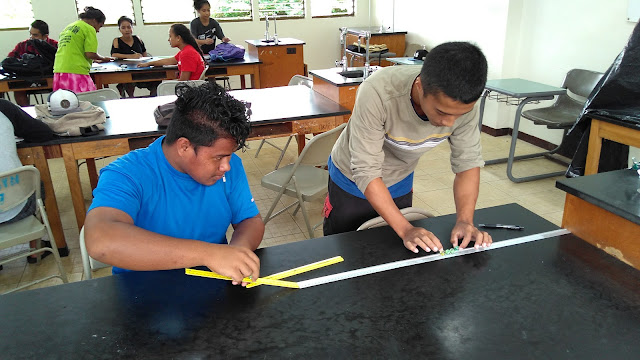 Saichy Barnabas on the left 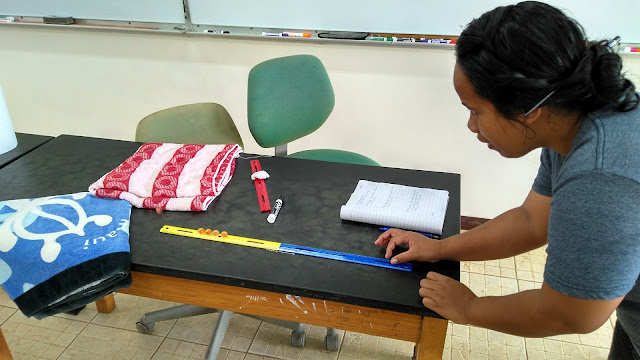 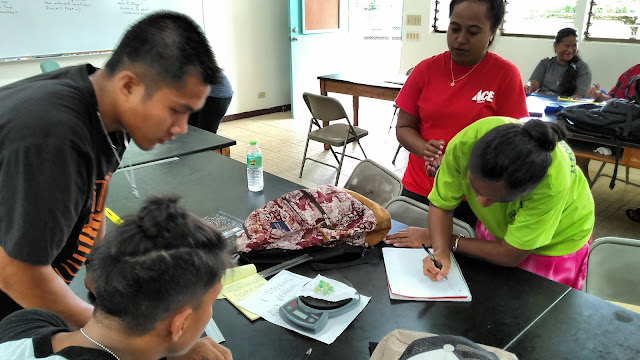 Johsper examines the mass of the marbles, one of the few groups to do so

A couple groups did opt to ensure that all of their marbles were the same mass - they had an implicit understanding that the mass could have been a confounding variable. 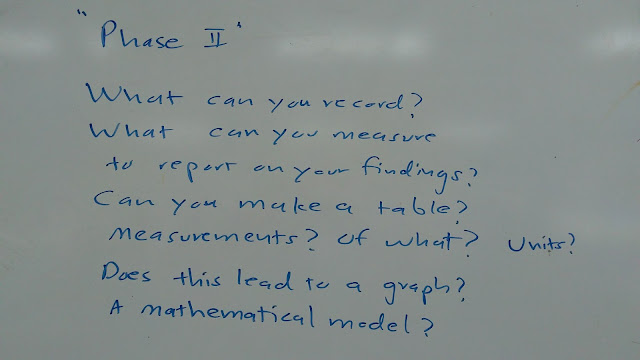 After the groups had explored the system, I then moved the class onto phase II. This was not on the board until later in the period. 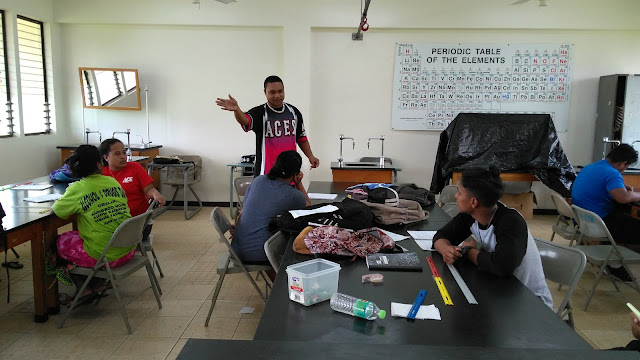 Darion explains the findings for his group 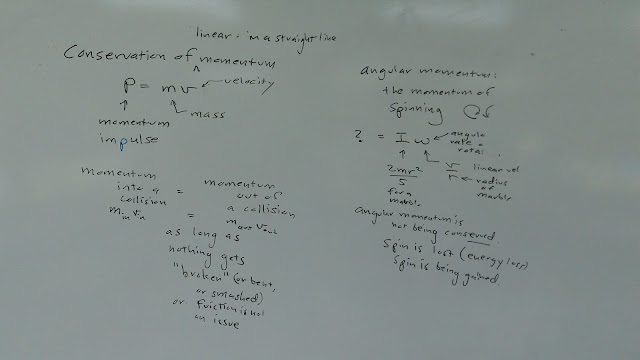 Were the class an lower level class I would probably leave things at the group explanations. Being a college class and for many students their only contact with physical science, I feel an obligation to at least mention that they are exploring the conservation of momentum. And that the issue of spin complicates the system they explored.
physci