An exploration of marble momentum without the word momentum

September 15, 2018
As noted in an earlier blog, over the years I have gradually developed better transitions and connections between the aspects of motion in the physical science class. Linear motion often yields a slight amount of non-linear curvature. Week three specifically explores that curvature as acceleration. Week four began with addressing the misconception that previous laboratory had measured the speed of the ball when the ball hit the floor. Thus week four began with gathering data on height versus speed at the bottom of that height.

I chose to make a small, subtle, yet in retrospect a critical change in the way the laboratory during the fourth week was approached. I brought in marbles, more than previously. I brought along a mass scale, timers, scotch tape, and a plethora of rulers. 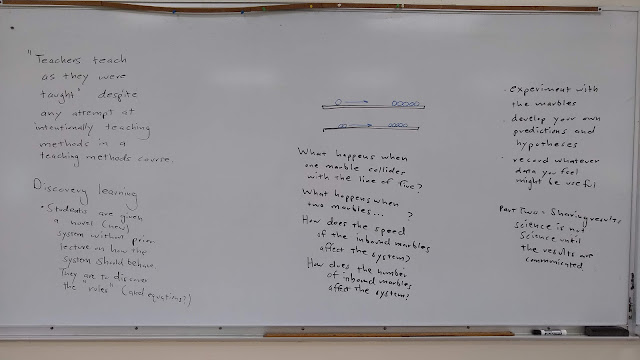 More so than in prior terms I emphasized the pedagogical nature of the laboratory up front. I noted the history of the course as being originally designed to serve both the general education science with laboratory requirement and the various pre-teacher prep programs at the college. I led with "Teacher teach as they were taught" despite any attempt at intentionally teaching methods in a teaching methods course - math methods, science methods. 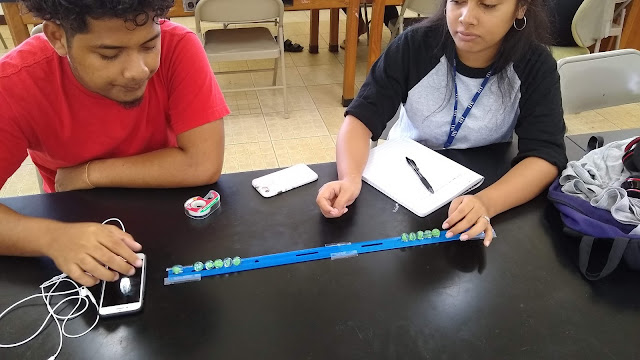 Then I noted that this laboratory was based in discovery learning: students are given a novel or new system without being provided prior knowledge about how the system should behave or what the system will do. The students are to explore the system and discover the "rules and equations" governing the system. 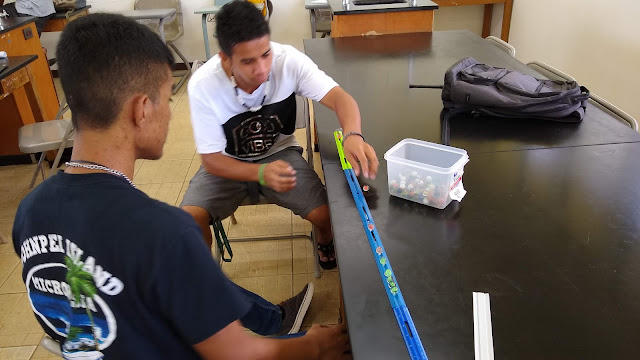 Jerome observing an attempt at an aerial drop

I did draw out the layout, seen in the image further above, and put some questions on the board. What happens when one marble collides with a line of five marbles? What happens when two marbles collide with a line of five? How does the number of inbound marbles affect the number of outbound marbles? How does the speed of the inbound marbles affect the speed of the outbound marbles? The directions on the board went on to say, "Experiment with the marbles, develop your own predictions and hypotheses, record whatever data you think might be useful." The board directions wrapped up by noting that in the second part of the laboratory the groups would share their results: science is not science until the findings are shared and communicated. 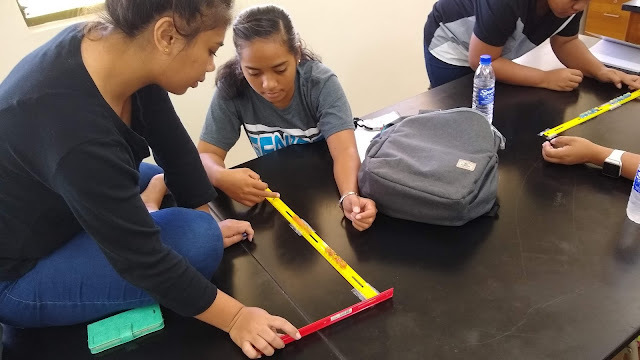 Note that this term I did not mention the term momentum nor did I refer back to the prior day's work with kinetic energy, neither in the introduction nor, as I have done in the past, at the end of the laboratory class. Usually I wrap up with brief coverage of momentum and the concept of the conservation of momentum. This term I wanted to leave the learnings gained in the laboratory untouched, at least until the next day. 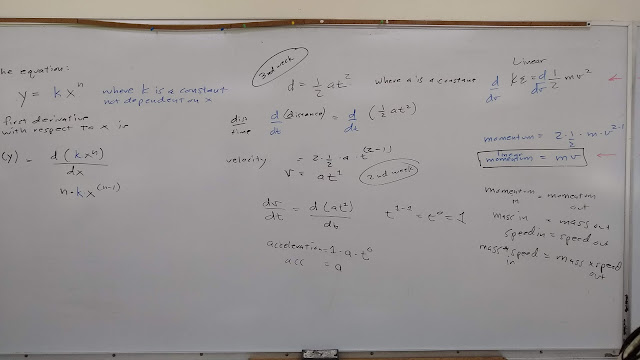 Friday was convocation Friday, which meant that there was only a half period. I opted to toss the planned quiz for the day, I had already formed in my mind the idea of pushing the introduction back and tackling the concept from a different angle. I began with a brief introduction of how to calculate the derivative of a monomial term with an exponent. Welcome to calculus. Then I showed how the week three acceleration formula had a derivative which was the formula for calculated the velocity from the acceleration multiplied by the time. I noted that the d(distance)/dt became a new variable that we call the velocity, or speed. I explained the d to mean "the change in" the distance with respect to the change in the time. I took the derivative again and obtained again a new variable that is called the acceleration. Then in a third column I took the derivative of the kinetic energy with respect to the velocity. What this might mean exactly is not entirely clear to me - one does not think of velocity versus kinetic energy as having a slope, but if one did plot velocity versus kinetic energy, the result would be a parabola where the slope is the momentum.  I noted that d(kinetic energy)/dv is a new variable that is called the momentum, and just as energy is conserved, momentum is also conserved. Noting that the marbles were all roughly five grams, mass in was equal to mass out. Speed in roughly equal to speed out. 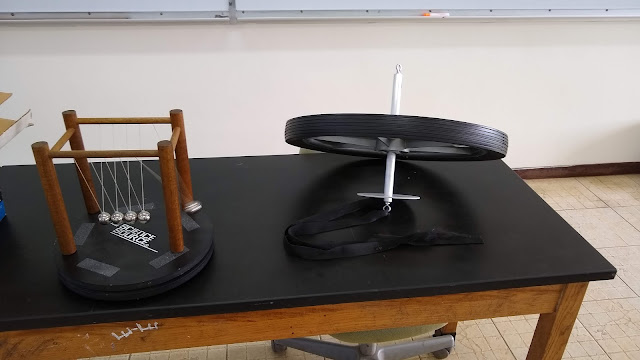 I went on to demonstrate the weird world of angular momentum with the spinning tire and the swivel platform, how rotating the axis of the spinning tire exerted a torque on me as if an external torque had been applied - when none had. This appeared to be unexpected for the students. This proved to be a worthy demonstration. Now what I need is a merry-go-round for us to play on. 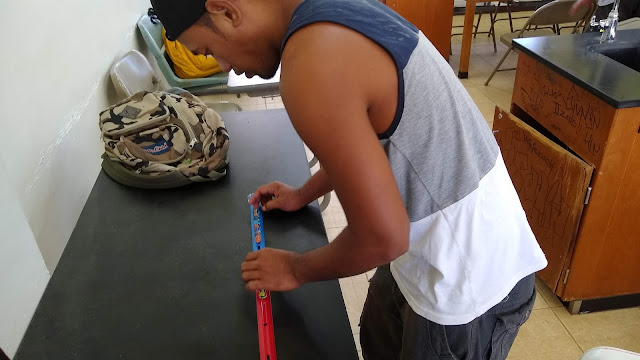 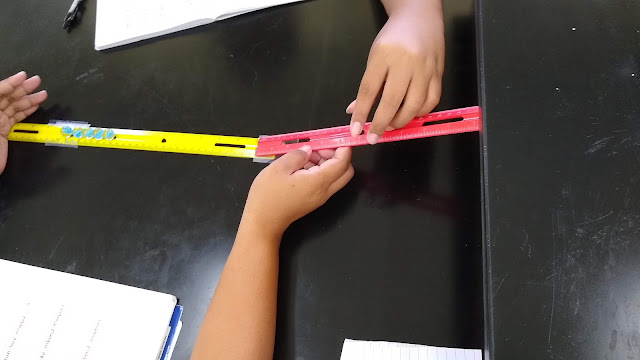 Monday the not-well-thought-out and never test plan is to try to use a spring scale, a rope, and the RipStik to measure the change in velocity of the RipStik for a given pulling force. The plan is to start at zero velocity, pull at a constant force, time that duration, then enter a speed trap to get a final velocity post-pull. The change in momentum will be the mass multiplied by the final velocity and divided by the pulling time. I want to stay away from acceleration for now as we just wrapped up with momentum on Friday. This is a return to Newtonian force as a change in mass. I will have to obtain my mass with the RipStik. Then have someone pull me while reading the spring scale. Like, what could go wrong? Ultimately the point is to have some fun while exploring the physical world. Science is fun and that is why scientists do what they do: they are having fun. Or at least they should be enjoying their work. 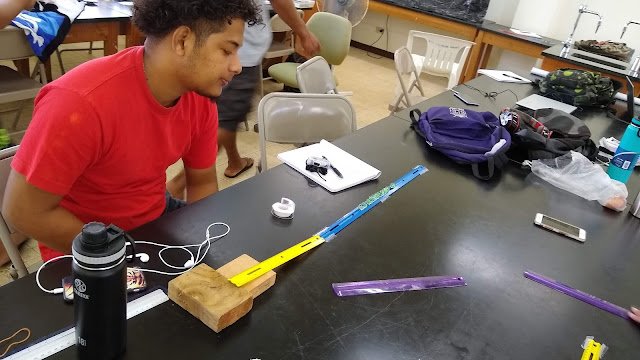 After the student started using ramps, I brought out the basket of blocks to assist them in ramp building. 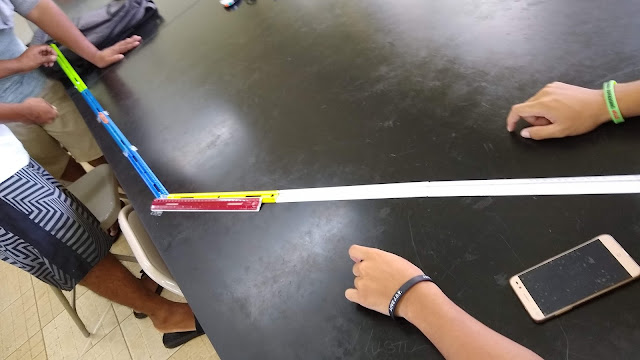 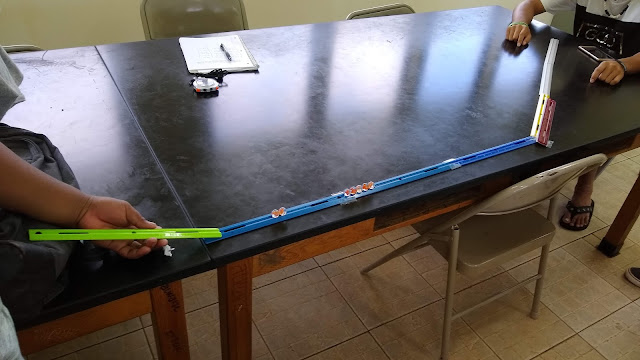 The long track has a ramp at one end 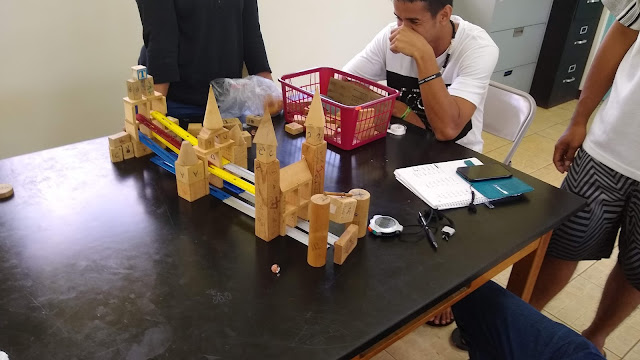 The blocks led to this construction 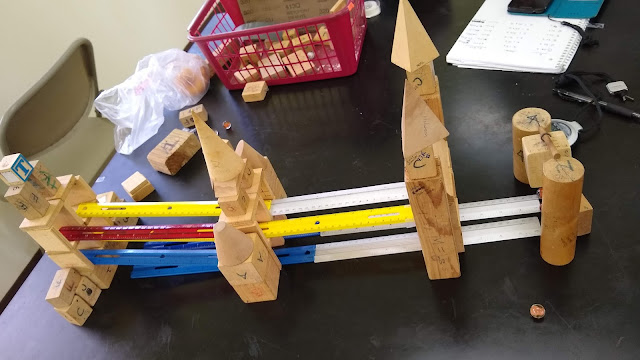 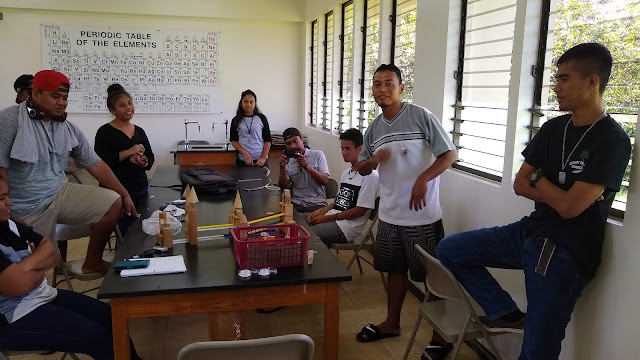 This is a key part of the exercise: groups tend to find out the same things. Science involves phenomenon that replicate, experiments that can be repeated with a common result. 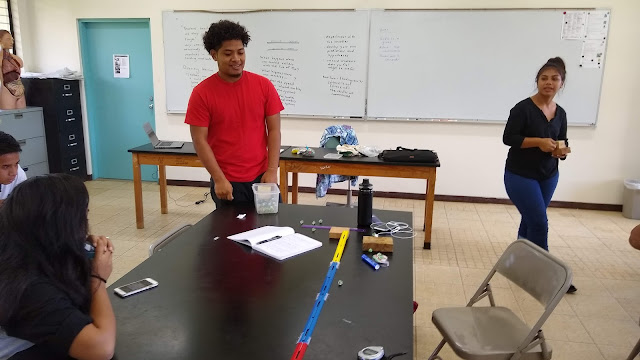 Rangpino explaining he and his partner's results 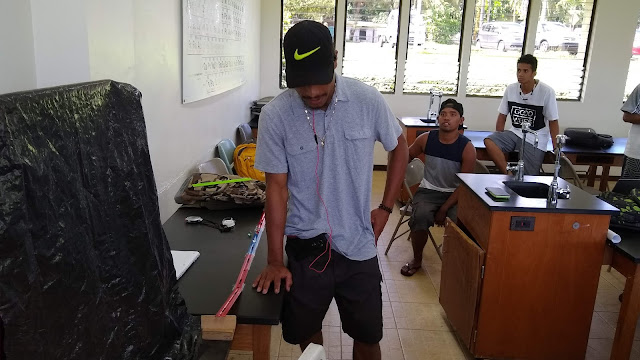 Vincent was joined by Franky, who handled the explanations 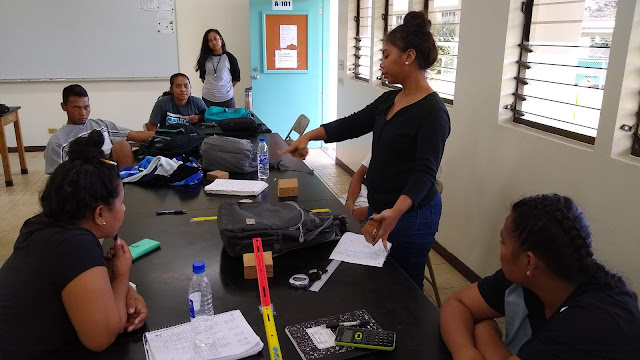 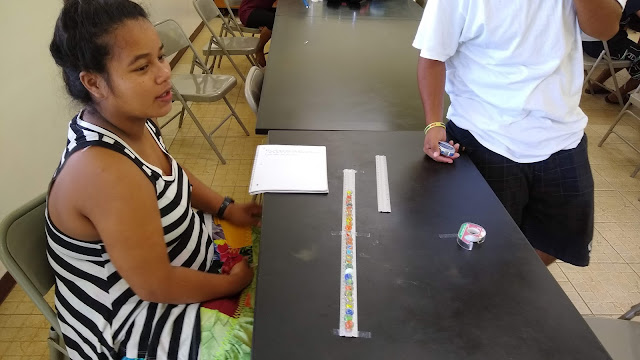 Sweetmarshya testing whether one in, one out, holds for long lines of marbles.

Although the blocks were still in the laboratory, the ramps had been taken down, and no student in the midday section set up a ramp. 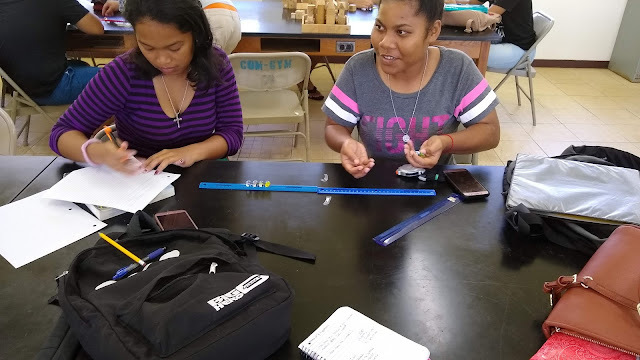 Delinah took the lead on explaining her group's results. 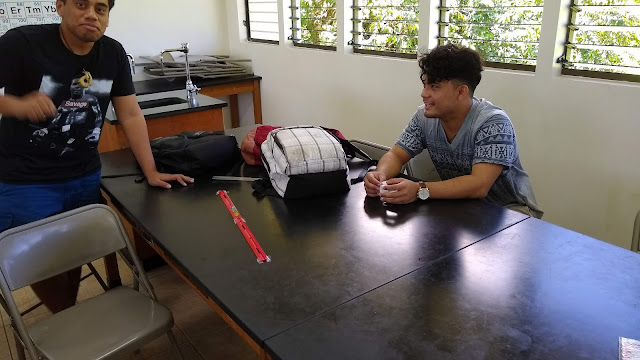 Reginalt and Luke had become interested in whether there is conservation of momentum in a two dimensional space - as on a billiards tables where one ball will go left, the other to the right. I noted that this was the case and would require trigonometry to resolve the components of motion.