August 28, 2011
Fall 2011 laboratory 022 marked the third term of the even "no write up" laboratories. Assessment done spring 2011 indicated that the shift from writing up every laboratory to writing up only odd laboratories did not have a negative impact on the improvement in writing. 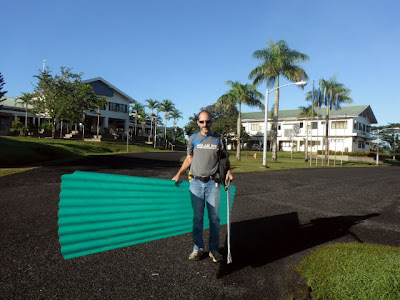 This term I had the Nissan and thus could not transport the roofing sheet to the gym. So I walked it across campus on a very clear day with saturating humidity. The photo makes the morning look lovely but the humidity was so close to saturation that one was instantly lathered up in sweat. 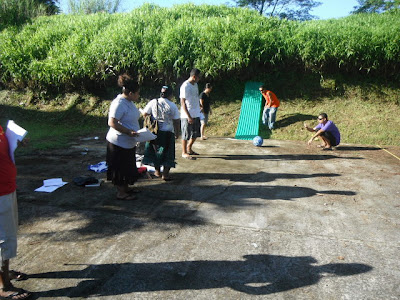 As this laboratory is often done in physics, the distance is preset and becomes the independent variable, with a timing determining the time to that fixed distance - such as a photogate on a air track. The ramp permits rolling the ball at a specific velocity that can be repeated. This allows the timing markers to stand near to the correct location for their particular number of seconds. Only a single timer is actually needed, one student calls out the seconds while watching a stopwatch or other digital second timer. This also means that one does not need hundredths of a second.

The ball slowed down both in the morning and afternoon sections, most especially after the first second. In the past 022 has provided an example of linear, unaccelerated motion. This term again, as last spring, the laboratory failed in this respect. The failure, however, was not as problematic for the curriculum as the failure might have been.Using the RipStik, I had demonstrated constant velocity motion on Monday. As a result, 022 became an opportunity to focus on what happens on a time versus distance graph when the velocity is decreasing with respect to time.

On Friday quiz 024 was able to exploit this accidental enrichment. Next week's accelerated motion will also benefit: the student's should be able to predict the nature of the curve for my accelerated RipStik demonstration on Monday. That will lead to a homework assignment to confirm that acceleration occurred. The homework would also be able to include, building on questions seven and eight on quiz 024, the pillar-to-pillar velocity.

The laboratory was wrapped up by graphing the data in the field and discussing the resulting curves on the paper. Ideas such as speed between timing marks were introduced. This term I did not discuss the tangent as the instantaneous velocity. The retreat was running in the gym, filling the lot with cars, and cramping our work space.

Without the computer laboratory second half, the laboratory could use some further enrichment and development to really bring forward the idea of the mathematics as making predictions. Maybe the class could be asked to predict the distance based on the particular release height? The complication is that one would have to work graphically - the data was simply not linear this term.
physci