April 23, 2011
In the terms prior to spring 2011 students in SC 130 Physical Science wrote thirteen laboratory reports complete with an introduction, equipment list, procedure, data tables, data chart, analysis, and conclusion. The intent was to put writing into the core of the physical science curriculum. Small but significant gains were seen in writing skills as measured by a rubric.

Thirteen laboratory reports in a sixteen week term effectively means marking thirty-two laboratory reports each and every weekend. Marking includes content, grammar, vocabulary, organization, and cohesion. The work load   demanded of the instructor meant that time for work on other courses was limited. Writing was improving, but the intensity of the course was draining.

Spring 2011 I decided to experiment with having students only turn in the odd laboratory reports, dropping the number of marked reports to seven during spring 2011. The obvious question was whether gains would still be seen in writing as measured by the rubric in use.

The rubric being used is not ideal for the task. The rubric, however, is based on that rubric used to mark entrance test essays for the college. As such, the rubric is well understood by a broad constituency at the college.

The grammar section of the rubric is as follows.


Typical grammar errors include tense shifts and unclear antecedents for pronouns. Bear in mind that a student effectively has to score a four or five to gain entrance to the college. A score of two or less is likely to lead to non-admission. With students often able to score a four at time of entry to the college, there is not a lot of upside room for improvement. Despite this, the students did show a significant improvement from laboratory one to laboratory thirteen (the last written laboratory report spring 2011). 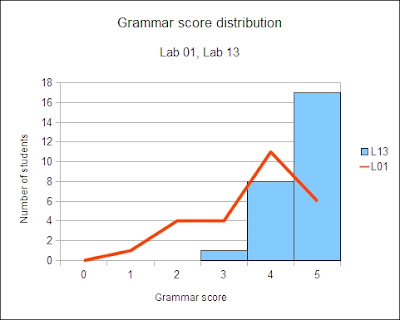 Grammar scores improved from a mode of four to a mode of five. While a few students scored below a three on laboratory one (red line), no student scored below a three on laboratory thirteen (the blue columns). Grammar improved on par with past improvements in grammar, the decrease in the number of writing encounters for the students did not negatively impact grammar improvement. Again, many of the grammar errors are tense, misuse of pronouns, and other errors which many of the students can comprehend and correct.

Vocabulary showed a similar improvement both in the shape of the distribution and the mode. The following is the rubric used for vocabulary. 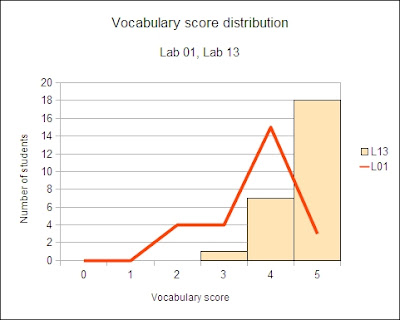 Organization is primarily determined by whether the students have the correct sections in the correct order.


Thus performance is linked more closely to the students' ability to follow directions and include all of the necessary sections. 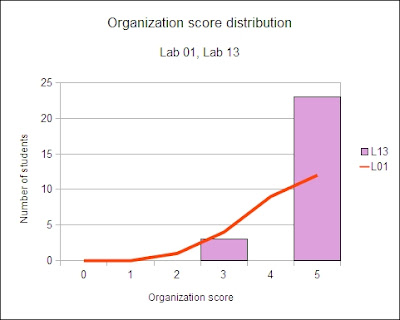 Cohesion is not an area that I directly address in most of my marking. I tend to focus on grammar, vocabulary, and ensuring that the proper sections are included, in order, and complete. A good report, however, flows, tells the story of the laboratory.


Although not a focus, cohesion improved during the term as well. 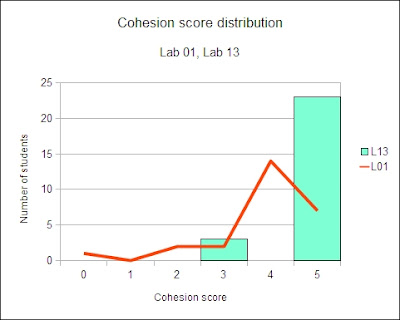 All four areas show improvement, improvement that other tests suggest is statistically significant. The reduction in the number of full write-up laboratories has not come at the cost of an improvement in writing. Most critically, areas of focus - grammar and vocabulary - both showed improvement.

Physical science can remain a course that improves writing skills at half the number of laboratory reports as prior terms. The course can remain writing intensive while being more time friendly for faculty who choose to utilize this curriculum.
assessment physci