Assessment of use of online physical science text by students

December 12, 2018
Science tends to be taught as a set of memorized facts, a list of previously discovered theories and knowledge that the student must master in order to be scientifically literate. And yet this approach has produced a scientifically illiterate electorate in many nations. Once science devolves into memorized facts, to learned content, then any other system of facts or content becomes equally valid in the mind of too many learners. How else to explain those who are certain the earth is flat, that climate change is not occurring, that evolution does not explain life on earth?

SC 130 Physical Science takes a different approach. Process takes precedence over content. The students are, for the most part, not exposed to facts that are not either derived from a laboratory experience or a demonstration. The course focus on laboratories and on mathematical models derived from measurement made in those laboratories. The course also has the students write up a laboratory report each week, with the report marked for content, reasoning, syntax, vocabulary, organization, and cohesion.

The result is a course that builds up a limited number of facts from direct experience. The intent is to show that science is not a matter of opinion, not a matter of belief. The intent is to render the sentence "I do not believe in..." as meaningless. Science is not a belief system, the speed of sound is simply what one measures out there on the road on a Thursday afternoon in October.

Note too that the course does not serve science majors - the course is a non-major general education core laboratory science course. The students are perhaps even more likely to hold beliefs at variance with science than science major students.

Given that background, a traditional physical science text would be inappropriate for the course. I refer to such texts as "a thousand factoids in sixteen weeks." Published texts are colorful and filled with information. Texts are not, however, experienced phenomenon.

Thus the course has a text designed to support the unique nature of the course, a text that to some extent is of a lesser importance than a text might be in other courses. Because the design is built around doing and experiencing science, the course could theoretically function without a formal text. That said, the course does have a custom built text that serves to support the students on their journey through the material.

The physical science text is an online text, designed to be mobile friendly. Given that the course focuses on experiences in the classroom, knowing whether the text is useful to students is not made clear in the classroom.

A first question might be whether the students can access an online text. To what extent do the students personally own the technologies necessary? 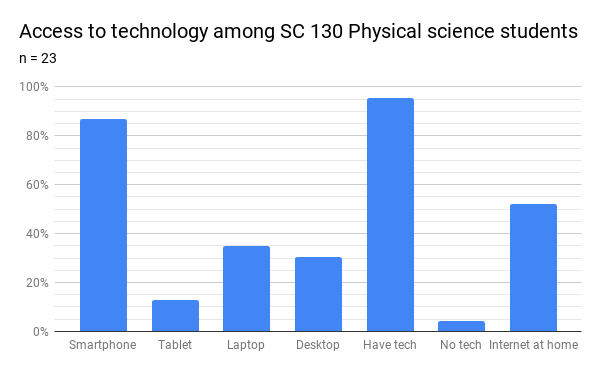 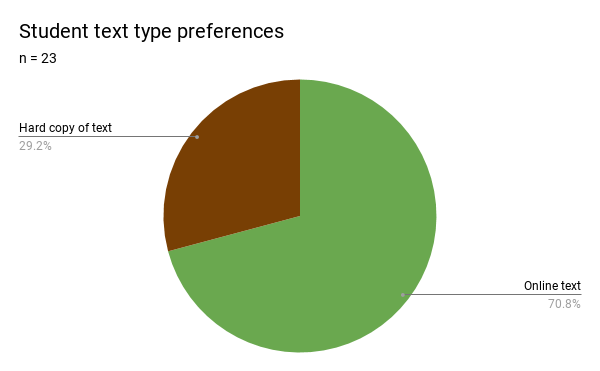 The course did not emphasize the text and the text was not often directly referred to in class. Were the students actually using the text, finding the text to be useful, benefitting from the explanations?

Row sums do not all add to 23, some students did not answer questions

Statistical note: one student marked both "Online" and "Hard copy." Both answers were counted in the respective counts. That student who marked both chose "Rarely" as an answer to number nine. Number nine should have been a "yes" or "no" question, that the question was not is a design fault in the survey.

The textbook is seeing more use than I had expected, and the students are finding the text to be useful.
assessment physci