Assessment of Schoology usage by faculty

In December 2018 survey forms were distributed to 37 faculty mailboxes at the national site, a meager six surveys were returned. The sample size was too small to draw any useful conclusions.

A separate unpublished analysis of student logins done in December 2018 by the Office of Institutional Effectiveness indicated that 95% of the students at the national site were logging into and using Schoology. A December 2018 survey of 62 students suggested again that 83% of the sections might be using Schoology. The report on student usage of Schoology found that students strongly favor the use of Schoology in support of their classes. This term, as was seen last spring, one of the aspects of Schoology listed by students as a reason for disliking Schoology was faculty who either do not use Schoology or who do not update their grades in Schoology in a reasonably timely manner. In other words, students liked Schoology strongly and want all faculty to use Schoology.

An analysis of Schoology faculty logins for fall term 2018 yielded an 86% rate of Schoology usage among national site faculty, in good agreement with the rate inferred from student surveys spring and fall 2018. An 86% actual login rate indicates that the estimates based on student surveys were reasonable estimates. 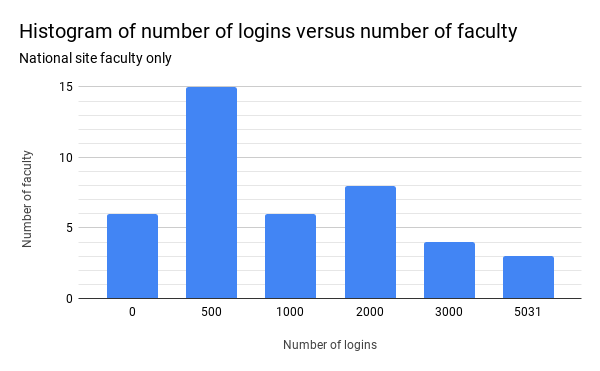 The number of logins by a faculty member will vary both with the nature of their use of Schoology and the nature of the subject being taught. Faculty who are logging in only to enter grades and attendance will have fewer logins than those grading, recording attendance, making and receiving assignments, engaging in discussions, distributing course materials, interacting with class based Schoology Groups, advising advisees, assessing learning outcomes, and giving online tests. In the chart above the faculty with the most logins are known to be utilizing online discussions and apps such as Google Drive Assignments and Cengage's MindTap in addition to grading, attendance, online tests, and assignments. 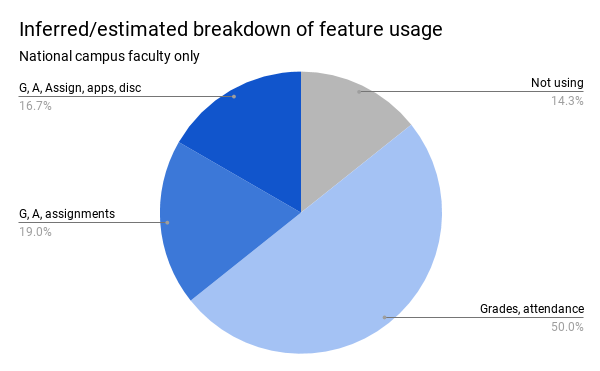 Although only six faculty returned surveys, their comments are still useful. When asked what they liked about Schoology, faculty responded:

When asked to comment on what faculty disliked, faculty responded:
A couple of comments on the dislikes. Mistakenly marking a day can essentially be "corrected" by marking everyone present for that day. Schoology only tallies absences, lates, and excused absences. Schoology does not tally the number of "presents" and thus a "present" is essentially a null value. That said, there is no way to make the green present marks disappear if one has marked the wrong day.

As for grading flexibility, Schoology has a Course override grading option that can be enabled in the Grade Setup. This allows an instructor to override a grade due to special circumstances.

Curving a set of final grades is not directly possible. Grade setup, however, allows the setting of weights by assignment category and includes the capability to drop one or more of the lowest assignments. Between the grade override column option, category weights, and the ability to drop low assignments, the functional intent of a curve can likely be achieved without resorting to a specific distribution. Some course outlines include language that specifically forbid curving grades according to a distribution curve.
assessment Schoology