June 23, 2018
The physical science class engaged in a follow-up exploration of data gathered at the prehistoric city of Leluh, specifically exploring whether Leluh (sometimes Lelu), Mount Finol Finkol, and the ancient sacred site of Menka (also Menke) on Kosrae are aligned in a line and whether that line aligns with the rising summer solstice sun. 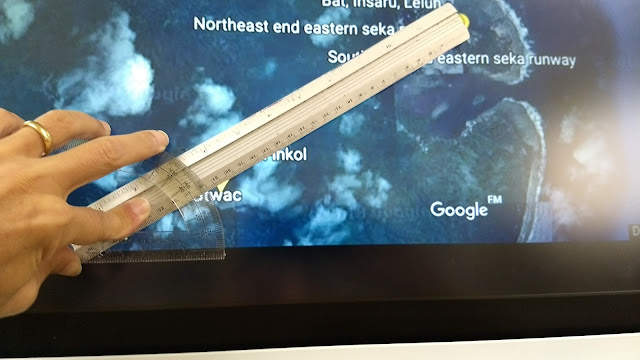 The alignment and the angle...

The most significant limitation was that the Google Maps web site will not permit multiple coordinate markers to be displayed. If there is a way to display multiple markers in Maps, then I am unaware of how this is accomplished.

Google Earth, however, requires Google Chrome browser. And college computers have only FireFox loaded onto them. And Google Earth is a Chrome only web app. I continue to push for Chrome to be adopted as the default college browser as my students now use Google Docs, Sheets, and Slides exclusively as their productivity software. All of these are optimized for Chrome and Chrome for them.

As a result, Chrome was run from my ChromeBook on the SMARTboard using an HDMI connection permitting the use of Google Earth in class. Google Earth permits the display of multiple coordinator markets at the same time. This meant, however, that the result was an instructor led session rather than a student led set of discussions around their own computers. The lab computers across the college are equipped only with FireFox (and Microsoft Internet Explorer, but I do not count that as an Internet browser). 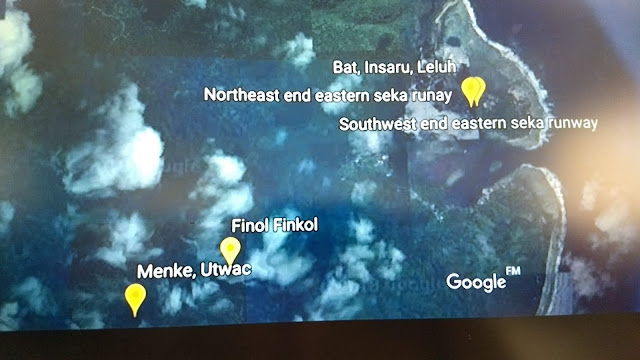 Obviously Google Earth is not the way to do this accurately. There are issues of aspect ratio, scale, distortion. And working visually is a terrible choice. However, this is an introductory physical science course and the learning focus is on latitude, longitude, solstices, equinoxes. 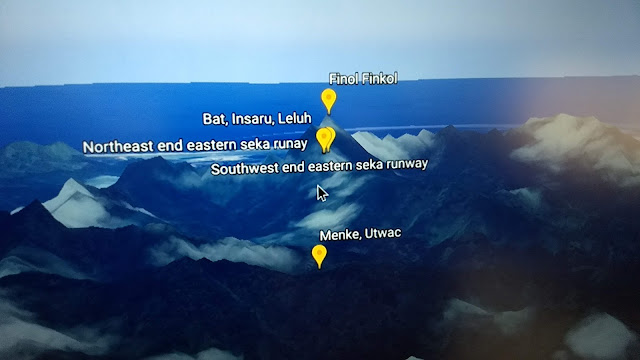 Menka, the top of the highest mountain on Kosrae - Finol Finkil, and Leluh do line up. That is a curiousity. The angle of that alignment, however, appears to be 31° north of due East. An implied azimuth of 59°. 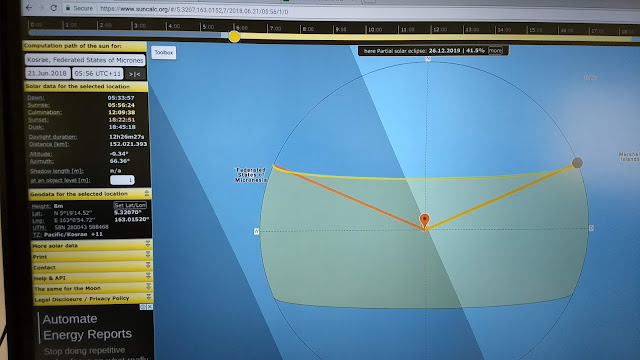 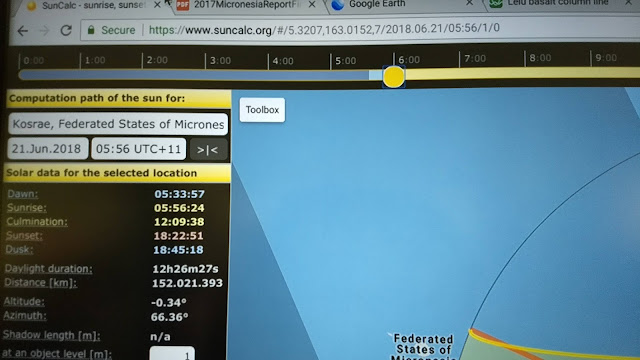 The earlier blog noted that the "seka runways" in Leluh appear to be at roughly 37° north of east. Again, errors could rise to 6% and there is an additional potential aspect ratio issue involving the import of an image into Desmos underneath that 37° calculation. 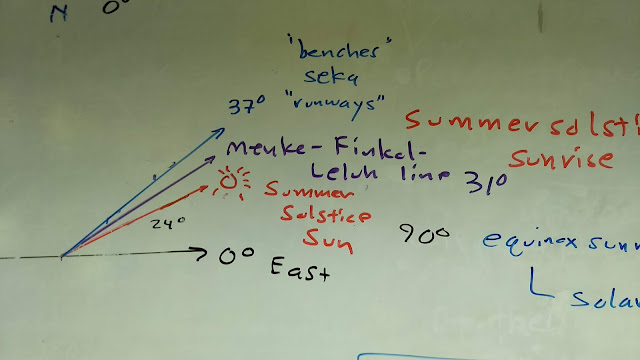 This suggests that while Menka, Finol Finkol, and Leluh indeed appear to be aligned, the alignment is not necessarily with the rising summer solstice sun.

Could there be an eight percent error in the work done by the class? Certainly.  Bear in mind too that the class did not climb Finol Finkol and make a GPS measurement there, nor did the class visit Menka. An attempt to set up a visit to Menka did not work out this summer. The coordinates for Menka and Finol Finkol both came from the Geonames web site. Nor did the class rise before sunrise on 21 June to measure the location of the rising sun, that was obtained from SunCalc.org.

The data also does not lend support to the basalt columns in the alleged Piper methysticum pounding area as being aligned to either the solstice or the Menka-Finkol line, although the slightly smaller difference  (on the order of 6%) leaves more room for the possibility that the pounding area either is aligned or was intended to be aligned to Menka and Finkol.

Obviously this study also does not take into account shifts in sun rising positions that have occurred since the 1300s when construction in Leluh began based on coral measurements.
physci