Improvement in graphical math skills via physical science and technology

There are rules for where the mɛ lands in the above expressions and one could be taught where the mɛ should be placed based on the terms to either side of mɛ. With enough practice, one could pass a test on where to place the mɛ. Assessments could be done showing that one had indeed mastered the student learning outcome, "Students will be able to place the mɛ correctly in an expression." A student might logically ask why they are learning to place the mɛ in the expression. They might be told that they will need this knowledge should they proceed on to courses with more complex forms of expressions such as:

In Love and Math Edward Frenkel makes the following observation, "What if you had to take an art class in which you were only taught how to paint a fence? What if you were never shown the paintings of van Gogh and Picasso, weren’t even told they existed? Alas, this is how math is taught, and so for most of us it becomes the intellectual equivalent of watching paint dry."

I would suggest the outcome is worse - students come away from mathematics classes actively disliking mathematics, thoroughly convinced that they cannot "do" mathematics. At the minimum, I can prove that students retain virtually nothing that is covered in mathematics.

The questions asked on the pre-assessment are:


The twenty-two students took the pre-assessment had the following mathematics courses completed:

Performance on the pre and post assessment is reported in the table below. 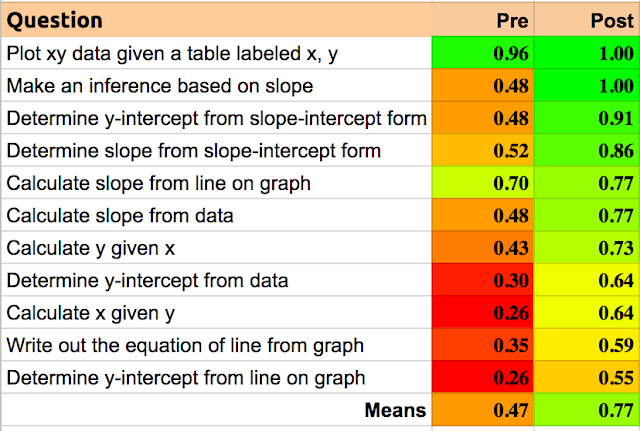 The only two skills that the students can be said to have at term start is the ability to plot (x,y) scatter data - an eighth grade skill - and to calculate a slope for line on a graph, perhaps a freshmen year high school algebra I skill. Bear in mind every single student has completed MS 100 College Algebra, and six have completed more advanced mathematics.

The post-assessment shows marked improvement for every question. Note that not only does the course not specifically teach this material, but throughout the course this term the students used Desmos to obtain the slope and intercept for linear regressions. Laboratories one, two, four, five, seven, nine, and eleven had data that was modeled by a linear regression. At no time did the students "manually" use the mathematical formulas to calculate the slopes and intercepts.

Data was entered as a table into Desmos. Desmos is both a website that runs in browsers and a free app which runs on smartphones. Desmos does not have to be online to function. 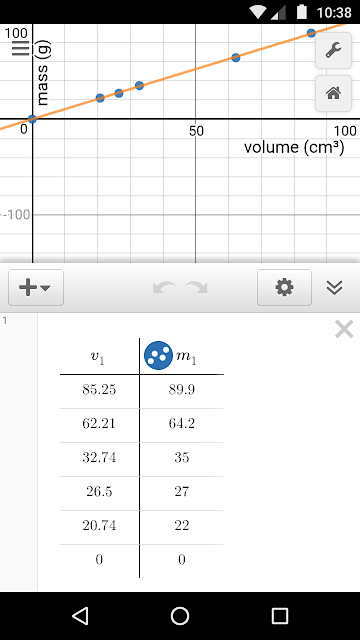 Desmos was then used to obtain the slope and intercept using a regression function. The use of the tilde character causes Desmos to perform a regression. Note that v1 is volume in cubic centimeters, m1 is the mass in grams. 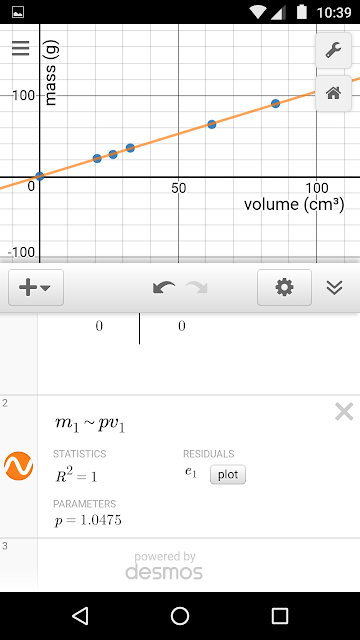 The slope p is the density of a bar of soap, m1 is the mass of the a chunk of the soap, and v1 is the volume of a chunk of soap. 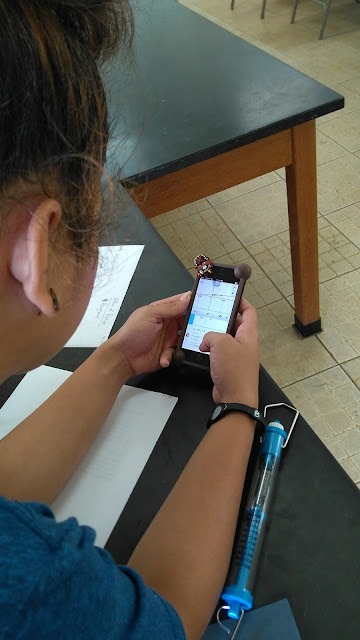 A student analyzing laboratory five data using Desmos on their smartphone in class. The app is free and small, able to run on older phones as well as newer phones, both Apple and Android versions are available. 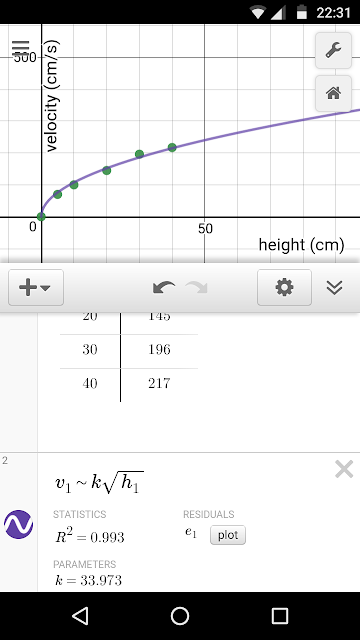 Data from a demonstration

Desmos can regress to any arbitrary function, a feature not available in spreadsheet software.

Thus at term end the students have not practiced the specific knowledge necessary to successfully answer the pre-assessment questions on the final examination. Yet average performance has lifted from a 47% success rate to a 77% success rate. Without having specifically taught the students "how to do" those problems, success rates have been lifted 30%.

I would suggest that at the end of the term in physical science the students have the cognitive connections necessary to understand and comprehend the material. The laboratories and exercises during the term provide concrete examples of systems modeled by linear expressions. The students comprehend the mathematics in a new way. I teach physical science as a science spoken in the language of mathematics, and mathematical models are interwoven with the material throughout the term. The mathematics occurs in a context, not in the abstract. And never as "thirty even numbered questions" a practice that may be a throwback to mathematics competitions during the renaissance (Chapter three, The Equation that Couldn't Be Solved).

The term in physical science is not spent studying mathematics in the purely abstract, with variations and twists on problems designed as if the students are in some middle ages competition between two scholars. Rather the same basic mathematical concepts are surfaced in context by each laboratory, and technology is used to generate the equations.

There is a tendency among mathematics instructors to limit in one form or another the technology students are permitted to use in a mathematics class. In physical science the use of technology is strongly encouraged and all students utilize technology such as Desmos and Google Docs (for laboratory reports) during the term. And yet at term end the students come away with stronger skills in mathematics. The idea that working things "by hand" without technology leads to some form of better or deeper understanding does not appear to be supported. Where some instructors start a class by saying, "Turn off your computers and smartphones" physical science begins with, "Turn on your computers and smartphones."

Physical science is a general education science with laboratory course that serves primarily non-science majors. Once students become more comfortable with me as an instructor, they often confess that they do not like science. Some even say, "I hate science." Others dislike mathematics or believe that they are "no good" at mathematics. I try to use the course as a vehicle in which they "do" science supported by mathematics. One of my goals is for them to see themselves as being able to "do" science and mathematics. A previous article reported on the shift in attitudes the course brought about. The students went from 10% having a positive attitude towards science at the start of the term to 62% having a positive attitude towards science.

In an evaluation some of the students chose to respond to the prompt, "What I think I will remember five year from now is..."

Mathematics taught in a context using technology can lead to learning of the mathematics. I cannot overhaul mathematics education and shift the focus from painting fences and abstractly memorizing how to move symbols such as "mɛ" around. I believe I can show the students that mathematics is the language of physical science and perhaps the natural physical world, that there is a beauty inherent in the mathematical nature of reality.

I believe this also helps answer the "What will I ever use this for?" question. The answer might still be the same answer as to whether the average non-science major will ever use the quadratic formula in their life, but the students now have a glimpse of reasons to perhaps love mathematics and science. If we find ourselves living in an age where citizens distrust science and scientists, perhaps that is the natural result of generations of students "hating" science and mathematics. There is no student learning outcome "Students will love science and mathematics," but perhaps there should be.
assessment mathematics physci