May 01, 2017
Although the present penchant in higher education is to attempt to measure everything in terms of student learning outcomes, there are softer goals that may be equally important in an age where trust trumps truth. All too often students have negative experiences in science.

A dislike of science is not an innate genetic trait, this is produced by science teachers, achieving the opposite effect that a science teacher might want to produce. Students who leave school disliking science are not going to trust scientists, and certainly do not have the tool set to sort out competing interpretations of phenomenon.

One result is a citizenry that first makes choices on who to trust and then bases their evaluation of the truthfulness of a fact based on that trust. If the citizen trusts a climate change denier, then that citizen is not going to be swayed by the preponderance of evidence that climate change is occurring.

There is, I would assert, a set of indirect linkages between a dislike of science, a distrust of science, and the rise of the phenomenon of alternate facts, non-scientifically supported paradigms, and opposition to science in general.

Learning to unhate is harder than having been taught to love in the first place. If my students walked through the door with a neutral attitude towards science, I would at least be starting from a blank sheet. My students walk through the door disliking science and convinced that they cannot understand science.

At the end of the term I asked the nineteen students in SC 130 Physical Science the following three questions in an anonymous survey.

1. Before I took this class my attitude towards science was:
☐ Positive: I liked science
☐ Neutral
☐ Negative: I did not like science

3. After taking this class my attitude towards science is:
☐ Positive: I like science
☐ Neutral
☐ Negative: I do not like science 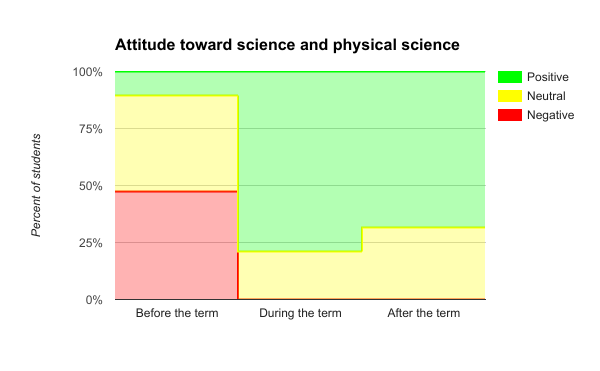 I would argue that the 68% are going to be more likely to engage with science in the future. Not professionally, but in terms of potentially reading about and remaining in contact with science. Science for the 68% of the students is something they like.

Although the class caters to non-science majors, there was also a lift in the number of students who were willing to consider majoring in science. 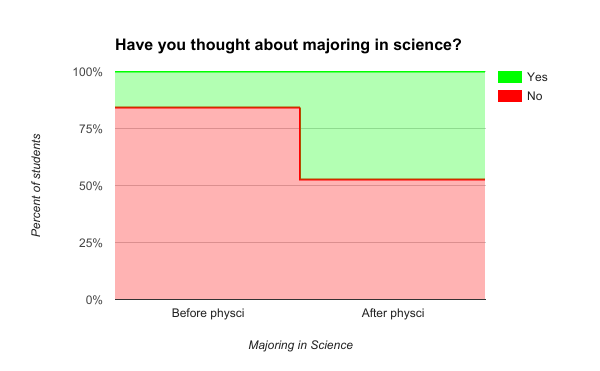 At term start only three students had considered majoring in science (16%). At term end this had tripled to nine students (47%). All of these students are non-science majors.

Science can be and should be fun. Challenging at times, potentially involving a good deal of work, but ultimately fun. A scientifically literate population is built upon a citizenry that likes science and which believes that they too can "do" science. Teachers, instructors, and professors who do not bring forth joy for their topic in their classroom should stand down and seek other professions. Causing students to dislike a topic one teaches is a terrible result and in the sciences leads to a citizenry opposed to environmental protections, disbelieving climate science, refusing to vaccinate children, and dismissing evolution.
assessment physci