January 23, 2017
With the Internet severely throttled at term start by an ocean floor fiber optic cable repair, no blogging was accomplished during the first two weeks.

The first Monday opened with the syllabus and pre-assessment. Wednesday the pre-assessment was covered followed by an introduction to density. 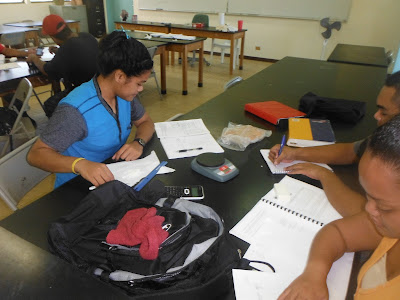 Thursday the density of soap laboratory proceeded as in prior terms. The Ivory may be becoming slightly denser with age - soap does lose volatiles over a long enough storage time. This may have contributed to the density of the Ivory being closer to one and leading to some slopes above one gram per cubic centimeter. 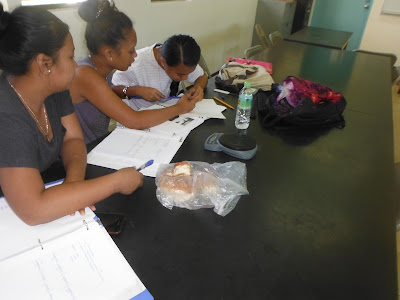 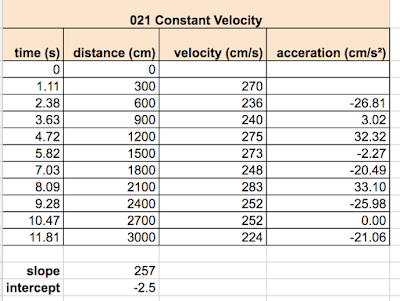 Although the time versus velocity chart was sufficiently visually linear, the speed was surprisingly unstable. 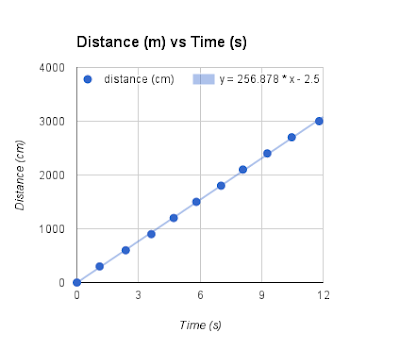 The unsteadiness in the speed has a tantalizing sinusoidal character, suggesting a possible interaction between the sinusoidal propulsion and the velocity with respect to time. 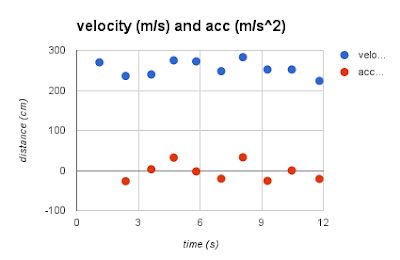 Laboratory two, rolling balls at a constant speed, was done with a twist this term. I opted to use five different balls - a four square ball, a Pinky ball, a medium sized superball, a steel sphere, and a golf ball. Each group consisted of a bowler, a timer, and catcher/recorder. Four of the six chronographs went battery dead during the first laboratory session. The morning lab was able to limp through data collection, but at 11:00 I opted to time every run. Slow balls were measured across 100 cm distances out to around 800 cm, medium speed balls were measured every 200 cm to about 1000 cm, and fast balls were measured either every 300 cm to 1500 cm or every 500 cm to 2000 cm. Even hundred centimeters (200, 400, 600...) were additionally marked with a circle, multiples of 300 with a triangle, and multiples of 500 with a pentagon. In the 11:00 session the shapes aided my timing of the balls.

No photos were captured of this laboratory in part because of the ongoing scramble to deal with failing equipment.

Post-hoc a number of discoveries on the capabilities of Desmos led to the use of Desmos for lab three. Desmos will allow three tables with lines on one graph, equations using the variables consistent with physics notation.

Note the ability to use v for the velocity rather than m for slope. The equation being regressed to is d = vt, nicely consistent with physical science notation. If a constant term were added, Desmos would estimate that as well, without the constant term Desmos regresses to the variable term only. 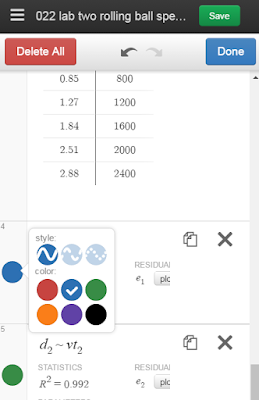 The regression lines did not original match the data point colors set by the tables. The regression line colors can be edited to match. The result is three ball speeds on a single graph with velocity values in matching colors. 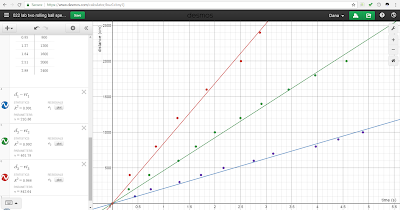 Week three fall 2016 I had noted that going over the prior Friday's quiz ate up too much time. This term I opted to hand out an answer key. 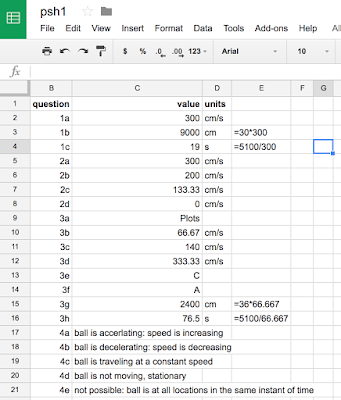 I then moved the class directly out to the sidewalk. 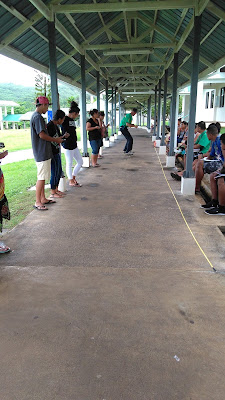 I also distributed the five basic stopwatches and asked the students to time run to 100, 200, 300, 600, and 800 centimeters. Each timer was responsible only for the one distance. I was keenly aware of the error that different start times would engender. This was a known problem years ago in an early version of laboratory two, and remains a problem in the speed of sound laboratory. 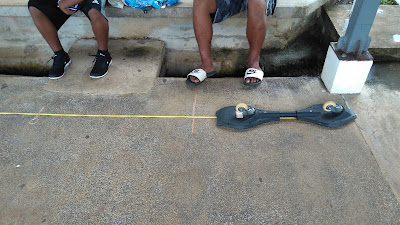 The first run failed when a timer was set to countdown mode. The second run generated usable data. The data was plugged into the Desmos graphing calculator app to have a look at the data. 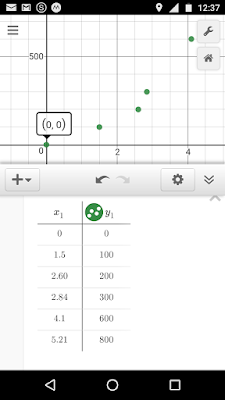 The data was not particularly smooth, but looked usable. I opted to do a second run. The second run graphed in what appeared to be a reasonable facsimile of acceleration. 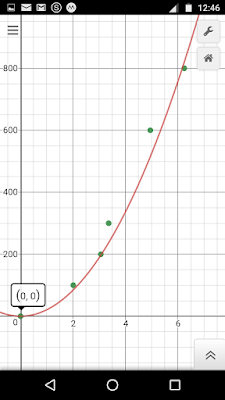 I used the final data point of 6.25 seconds at 800 centimeters and the formula d = ½at² to calculate an estimated acceleration of 40.96 cm/s². I used y=20.48x² to add the red line seen above. I could not generate quadratic regression, although that may have been linked to a lack of WiFi on the sidewalk this afternoon.

Later at my desk I realized that Desmos could give me a regression without a linear or constant term - a capability I have long desired. The key is the use of the tilde and the y₁ format for the dependent variable. Desmos finds a more optimal coefficient of 31.535 which implies an acceleration of 63.07 cm/s².

A look at the velocity suggests that acceleration was only maintained through 300 cm. After 300 cm my speed appears to have fallen - for both runs. Whether timing issues were at play in both instances cannot be determined. Given that I did not have to think about timing, I thought I was able to focus solely on maximum acceleration through 800 cm. I had set aside keys, phone, and all other encumbrances. Despite this, the data suggests slowing over the final two timing points.

Google Sheets will now do a quadratic regression. but does include a linear and constant term.

The velocity graph is puzzling at first, until one realized that the final two points represent a lower velocity. 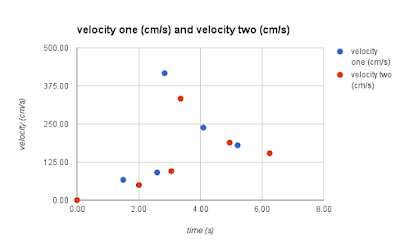 The result is not as satisfying as a smooth acceleration would be. And the presumption of constant rate of change of velocity that underlays a constant acceleration is more than badly violated. That the time versus distance chart is at all roughly parabolic is perhaps little more than an illusion. 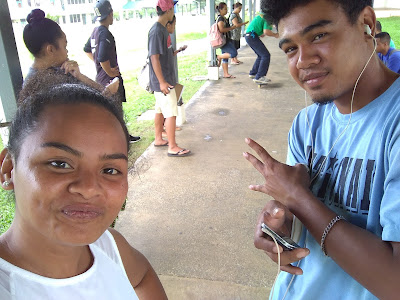 A 300 cm run is clearly too short. Perhaps once the lap timing chronographs are up and running again having students time all the points will improve the data. Having the students generate the time is useful and simplifies my task load. The use of Desmos in the field appears to be quite useful to gain an insight into data as the data is generated.

On Wednesday I realized that the choice I made to use y = ax ² is confusing. The confusion arises from the algebraic use of the letter a in y = ax ² + bx + x and the physical science use of the letter a in d = ½at² + v₀t + d₀. I should have included the 1/2 in the regression formula. Desmos permits one to regress against the formula of one's choice - I am unaccustomed to such a capability. 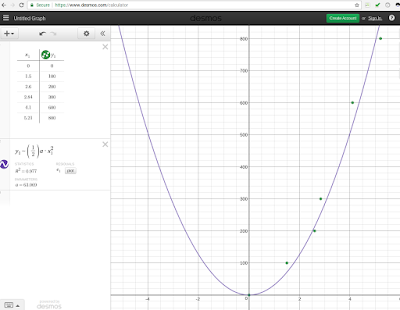 This results in Desmos displaying the acceleration directly while retaining the zero velocity start and the zero distance start (no linear, no constant term).