ILO 2. Effective written communication: development and expression of ideas in writing through work in many genres and styles, utilizing different writing technologies, and mixing texts, data, and images through iterative experiences across the curriculum. 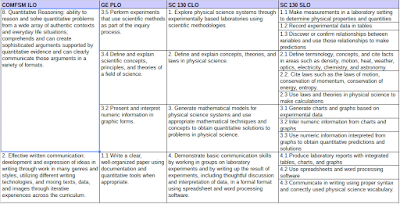 Directly assessing the student learning under course learning outcome was facilitated by the use of a custom rubric to mark laboratories submitted by the students via Schoology. 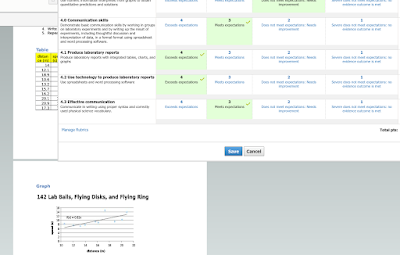 The outcomes were evaluated on a four level scale:

This permitted direct reporting of achievement of the learning outcomes. 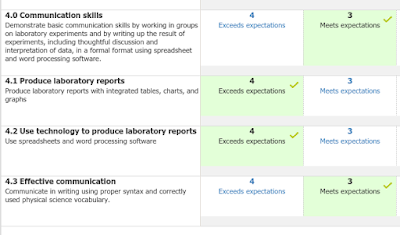 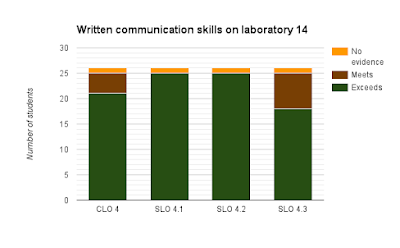 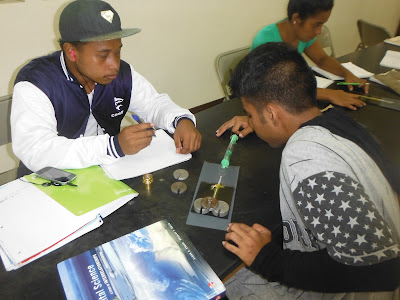 This approach of using custom rubrics with learning outcomes from the outline could conceivably be used more broadly in other courses. Student scores then reflect performance against outcomes on the outline. Note that the current rubric also includes separate metrics looking at grammar, vocabulary, organization, cohesion, table format, recording of data, graphing skills, mathematical analysis, and discussion. The outcomes are not the only metrics on the rubric. The marking load is made manageable by Schoology with its point-and-click rubric completion and automatic updating of the gradebook.

* The current course outline actually dates to 2007. Up to 2007 an out-of-date 88 outcome list of science facts constituted the SC 130 Physical Science outline. In 2007 that outline was essentially compressed into four broad subject areas as a first step towards eventually revising the outline to focus on mathematical models that underlay physical systems** and writing as communication skill. As the course was being taught in 2007 to 2010, work continued on revamping the outline. In 2011 the college undertook reformatting all outlines at the college, but instructors were instructed to not change content at that time. That meant that the outline approved in 2012 was still the outline designed in 2007. Each year since 2012 a revised outline has been prepared and submitted. In August 2016 a version of the outline compliant with the ever evolving format as of spring 2015 was again submitted. The proposed outline has yet to be considered by the appropriate bodies. The proposed outline provides course level outlines that are written more broadly and provides content flexibility to the instructor on how these outcomes are delivered. The original 2007 outcomes continue to be reported upon while reporting on the proposed outcomes has also occurred. The content specified in the 2007 outline continues to be covered, the change is not in content but in a shift from an outline that focuses on science fact content to an outline that focuses on exploration, experimentation, mathematical models, science as a process, and communication.

** The course is guided in part by the following thinking:

In physical science a "relationship" means how one variable changes with respect to another variable. This change is described using mathematical equations. Math is the language in which physical science is "spoken."

Galileo Galilei spoke of science as "natural philosophy," a term the Greek philosopher Aristotle also used for science. Galileo noted that the universe around us is "written" in the language of mathematics:

[Science] is written in that great book which ever lies before our eyes — I mean the universe — but we cannot understand it if we do not first learn the language and grasp the symbols, in which it is written. This book is written in the mathematical language,... – Galileo Galilei

For a physicist mathematics is not just a tool by means of which phenomena can be calculated, it is the main source of concepts and principles by means of which new theories can be created... ...equations are quite miraculous in a certain way. I mean, the fact that nature talks mathematics, I find it miraculous. I mean, I spent my early days calculating very, very precisely how electrons ought to behave. Well, then somebody went into the laboratory and the electron knew the answer. The electron somehow knew it had to resonate at that frequency which I calculated. So that, to me, is something at the basic level we don't understand. Why is nature mathematical? But there's no doubt it's true. And, of course, that was the basis of Einstein's faith. I mean, Einstein talked that mathematical language and found out that nature obeyed his equations, too. – Physicist Freeman Dyson
assessment physci Schoology