November 20, 2016
In ethnobotany class angiosperm diversity is covered in a set of three classes: vegetative morphology, floral morphology, and fruit types. This term the invasive species walk was moved ahead of this set of three classes. In past terms invasive plants has been behind the three. This structure worked well, shifting the invasive walk focus onto finding and identifying invasive species and away from a rehash of forgotten vegetative and floral morphology. 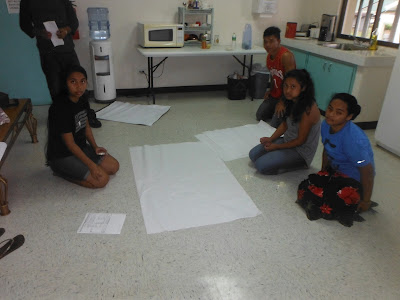 "Bring an edible fruit to classify and share" had been done as "this is my fruit and it is a..." presentation in A101. Last term that session went somewhat awry as some students ate their presentation before presenting. I wanted something different, something that might generate more discussion and appreciation of the potential gray areas. 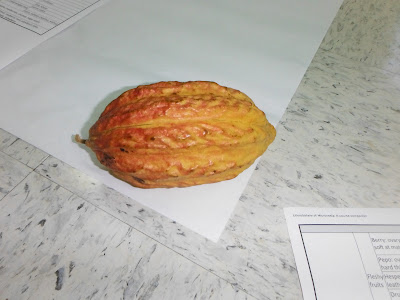 I decided to attempt to have the class build a single fruit classification diagram including the fruit that they brought to class. I did not know where the class could work. Initially I tried working outside on the sidewalk, but the wind proved problematic. 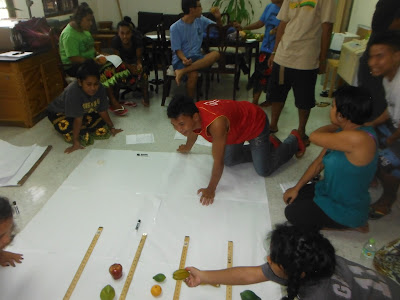 Being late in the day, I commandeered the faculty lounge. The classroom does not have enough open floor on which to work - the lab tables are bolted to the floor. 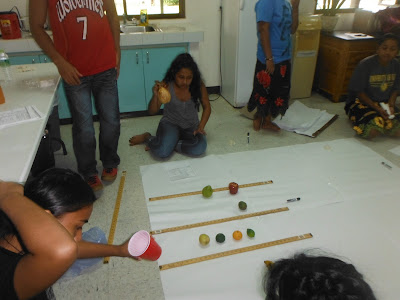 Tremay works on a another gray area: coconut

As I had no idea how to proceed, I explained the vision of a single large fruit type sheet with real fruit modeled on the fruit type table in the text book. 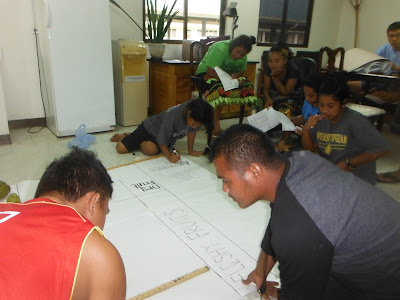 As the chart came together the gray areas surfaced naturally. There was only one banana, where to put the banana? As a berry or pepo? Why? Can its leathery exterior qualify the banana into hesperidium? How about the coconut? Papaya? And then there is the cacao, a fruit that the botanists agree to disagree on the placement. Berry? Pepo? Probably not a drupe, although some sources apparently put the fruit there. 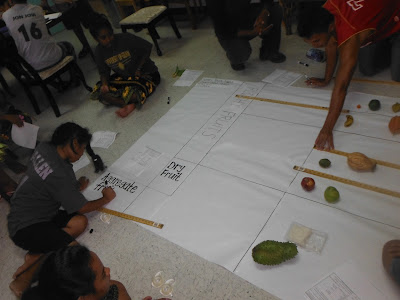 Soursop in as an aggregate fruit, rice above it as a dry fruit, a grain

The students were, for the most part engaged, and active in the design and layout of the poster. This mirrored the activity the leaf poster project had generated. The success of the leaf and fruit projects suggests that the class will need a good deal more poster paper per term. 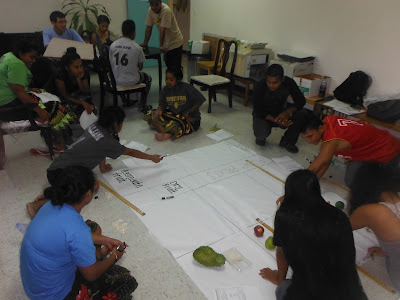 I suspect that the leaf shape posters helped as an advance organizer for the fruit classification poster session. Once the basic layout was settled upon, the labels received lavish attention. 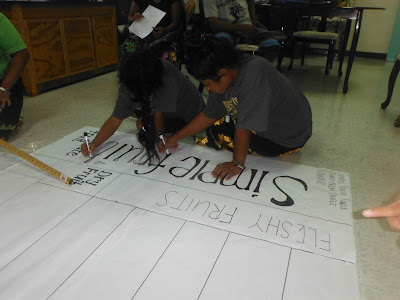 Georgene and Genrisa work on crafting the lettering

The bulk of the class was actually taken up with making the chart look good. This was something the students themselves decided to do. As they worked they continued to reference the names of the fruit types. This exercise had "bought" more attention and time on topic than any lecture I could have delivered. 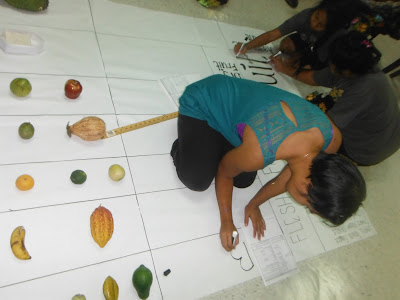 The class opted to put cacao and banana under pepo, the coconut is down with the drupes along with a dois mango. 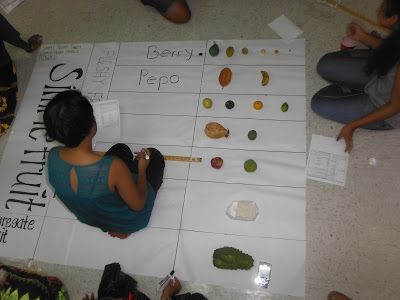 During the creation of the poster the students were active, talking, laughing, apparently enjoying themselves. The goal is not that they will have memorized fruit types but rather that they be aware that a fruit classification system exists. Long after you have forgotten the quadratic formula you are vaguely aware that there is a way to solve some equations with formulas. That is the goal, to remember that the system exists. The details can always be looked up. Perhaps on Google. 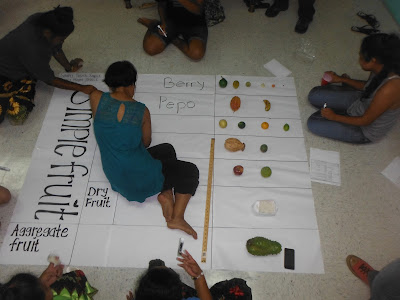 
Learning can be fun

A fun activity is more likely to be a memorable experience. To be held longer in the memory banks. "Remember that fun time when we..." is a phrase that make sense. One is less likely to find oneself saying, "I remember every detail of that long boring lecture that put me to sleep..." This is not a question of whether learning can be fun but rather that fun is a necessary ingredient to real learning and long term retention. 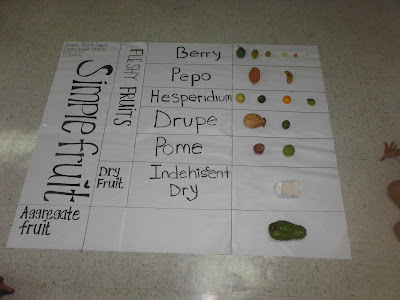 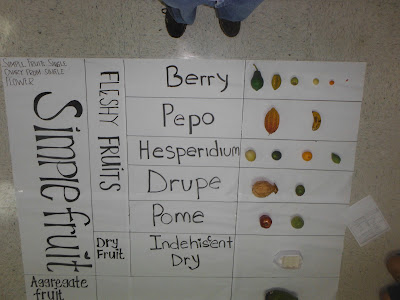 The berries include papaya, star fruit (carambola, ansu), guava, pomegranate, Surinam cherry, and a hot pepper (Capsicum  frutescens). Cacao and banana are in pepo. Hesperidium includes lemon, lime, tangerine, and another lime. Drupe includes a coconut and a dois mango. A western apple and pear are in the pomes. Rice is the dry fruit, and a soursop (sei) is down in the aggregate fruit category. 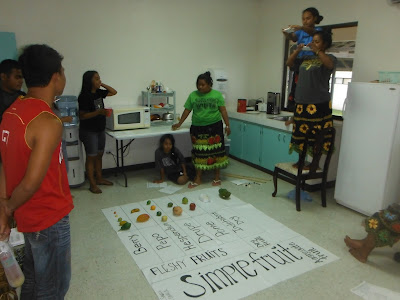