November 11, 2016
Vegetative morphology has traditionally been handled as a brief opening lecture on leaf arrangements and leaf parts followed by a walk and talk around campus to illustrate the leaf types in the field. Although the material is not tested every term, and will not be tested this term, tests have shown that this approach yields little retention. The lack of retention has not been a particular concern as the goal is not that the students should memorize and retain the names of the parts and the leaf shapes, but rather they should know that a taxonomy of parts and shapes exists. The course is not catering to botany majors, there are none at the college, but rather to students in education, business, Micronesian studies, and liberal arts programs. 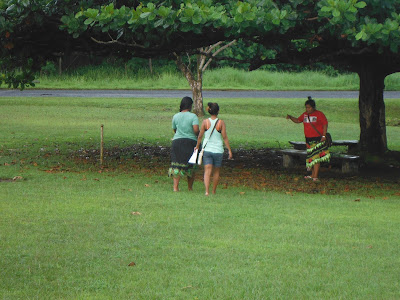 While the walk and talk was able to well illustrate a variety of leaf features and shapes, as well as reviewing the names and uses of local plants, the exercise was yet one more exercise of a type where a few students nearest to me and most interested in the material gain the greatest potential learning benefit. In a class of 20 there are always going to be students arrayed farther to the back of the group who are less interested and are not engaging with the material. Although I do what I can to broaden engagement, ultimately I cannot force a student to engage. 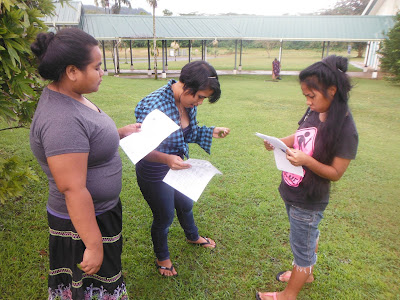 Joyleen, April, and Georgene study the handout next to Saraca asoca

This term I thought I would try changing the structure and have the students engage in a seek and find experience. The exercise would mirror an activity that could be done in an elementary school classroom and thus would be potentially useful to those students in the elementary pre-teacher education program. 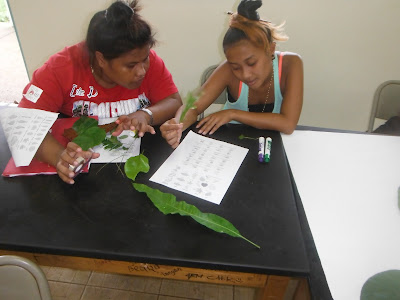 Siorine and Mary-Ann sort their leaves in the classroom

The drawings I had done for the text book were not ideal for a seek and find experience. I prepared a handout using sets of leaf shapes from a variety of sources. With one student in Japan, one in Chuuk, and five others absent, I started the class with 13 students. I had five sets of tape, glue, and markers. 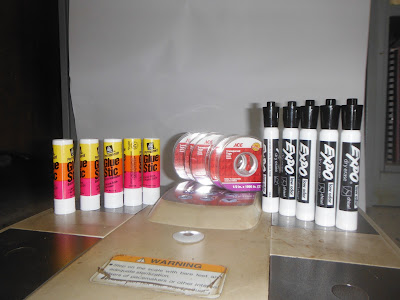 My original intent was to have five groups of four students. I divided the 13 students into three groups of three students and one group of four students. Two more students would arrive late and they were added in the field to groups of three students. Four would work out to be a reasonable number of students in a group, three works well too. My perception watching the students work after collecting leaves is that five would be too many students, someone would be completely idle. Pairs, however, might be too few for the nature of the exercise. 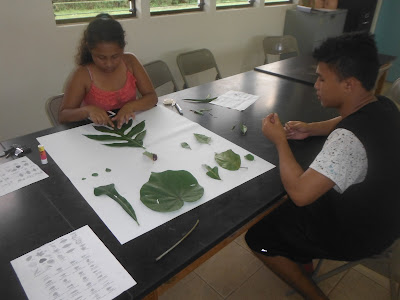 Tremay and Mitchell work on their poster paper

The students gathered leaves from across campus and then returned to the room to mount their leaves on poster paper. All groups chose to use tape, the glue sticks did not work. The session in the classroom surprised me. The students were discussing, at times arguing, over whether a leaf was ovate or elliptical, whether a particular leaf was orbicular, and what constituted lanceolate. The students were much more engaged, and had been out in the field where they had worked in their groups far from the classroom. 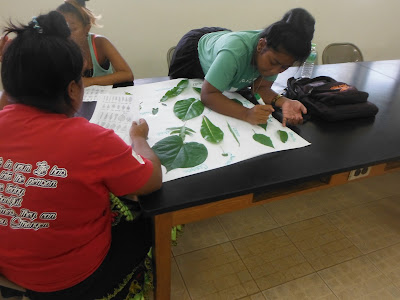 At the end of the class the student groups had each prepared a poster paper with 13 to 17 leaf shapes, venations, and arrangements. One plus of the tropics is that leaves are always available. 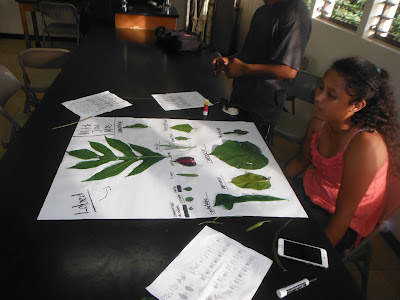 Tremay and her group's poster paper

The class effectively ran out of time, hitting the end of the period as the last couple of groups taped down their final leaves. The next session focuses on floral morphology. Whether there is a way to do something further with the poster paper sheets remains unclear to me at this time. The choice of leaves among the sheets is duplicative - there exists a subset of leaves functionally near to the classroom and each group collected similar sets of leaves. 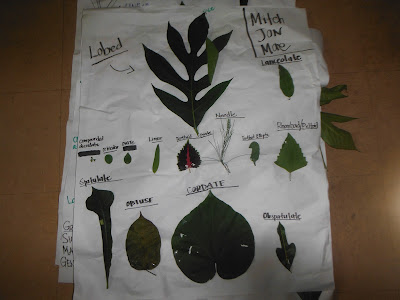 One student asked if liwadawad marer was reniform, although they had not found any Centella asiatica during their walk. I was surprised that they were able to make this connection. My own opinion is that Centella asiatica is one of our only reniform leaves on campus. I also noted that some groups stumbled onto the conception that Chromolaena odorata was effectively deltoid, another opinion I had formed only after a few terms of considering the leaf. Some identifications were arguably not optimal, but the students showed real engagement with the leaf shape material. The syllabus this term does not include a formal assessment of this material, thus whether retention is improved will not be measured. As mentioned above, however, my goal is exposure more than retention. Should the need arise to describe a leaf shape, the students will know that such descriptors exist.