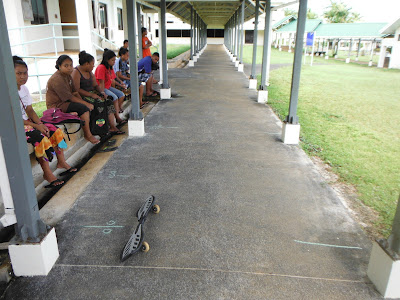 Zero was at the 3000 cm mark from the previous Thursday

Fall 2015 I dropped the deceleration leg and accelerated from zero with excellent results. An attempted repeat spring 2016 suffered from swings in velocity where the velocity did not always increase. I knew the difficulty was  in part that I was accelerating towards a downward slope which made the dismount difficult. I also had ideas on shifting the timing marks. 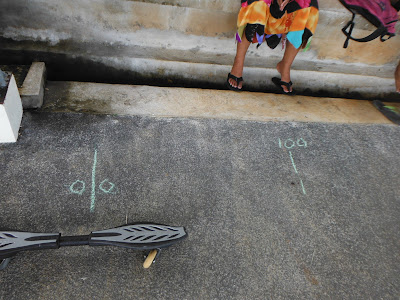 Summer 2016 I reversed the acceleration, making the RipStik run a westbound run towards the LRC. Based on recommendations from last spring, I shifted to a 0, 100, 300, 600, 1000 cm timing mark sequence. The 100 cm came too fast, but I would not shift that back to 200 cm. Obtaining that "flatness" that characterizes the parabola requires a timing mark shortly after launch. Otherwise the graph looks rather linear. 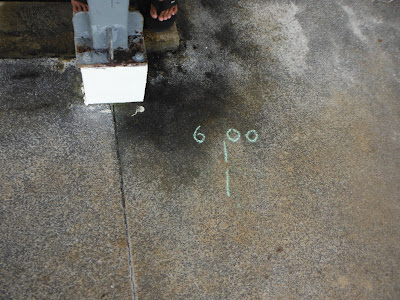 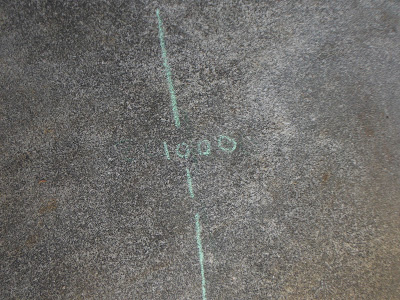 Data gathered on the run is in the first two columns. The third column shows that my speed increased, which was an improvement over spring 2016. That increase, however, was not steady - see the acceleration values. The data suggests that I was able to hold my acceleration for only the first 600 cm. 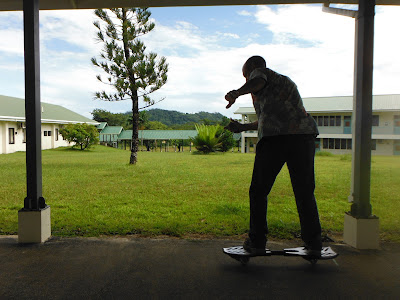 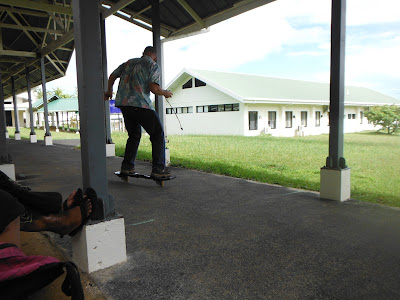 The run out uphill into LRC allowed me to burn off my speed, permitting a turn-around and roll back to the acceleration strip. Getting the timing right is challenging - focusing on constantly accelerating while getting the timing done is difficult. Perhaps the students should time the run. 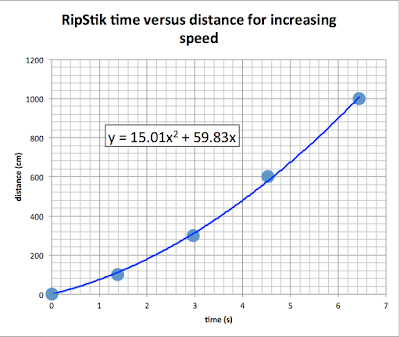 The time versus distance graph is a fairly smooth parabola, and one which well mimics the one that would be seen later in the day during laboratory three. In this respect the advance organizer was a strong success. 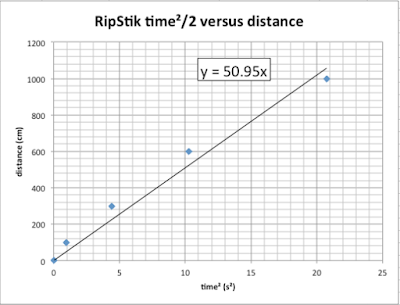 With the computer laboratory available at 9:30, I took the class up and ran the above two graphs into Excel. The second graph has the time squared divided by two (time²)/2 which results in a slope equal to the acceleration of the RipStik (if the change in velocity were to have been constant).

The demonstration appears to work well in preparing the students for laboratory three. The use of two graphs, made possible in part by the 85 minute period, helps set up the conceptual framework for getting at the acceleration of gravity. Getting a steady acceleration remains challenging. The up front initial acceleration of 53 cm/s² suggests that I am pushing too hard at the start and could accelerate more slowly into the 100 cm mark to balance the lower acceleration seen beyond 600 cm. The acceleration is going to fall off, perhaps starting with lower acceleration would help.

Post-script thoughts. Noting some patellar-tibular soreness, perhaps simply backing off on the acceleration would work. Fall 2015 the acceleration was 39 cm/s², which yielded good results. Spring  2016 and summer 2016 were both up around 50 cm/s², and neither produced results that were as consistent as the previous fall. At 50 cm/s² I have about four seconds before I max out just above 200 cm/s, which was a distance of about 480 cm summer 2016. My thinking is to return to an eastbound run so as to not work against the slope, and do not push the acceleration as deliberately. See if the acceleration can be back off down to around 25 cm/s² or thereabouts, low enough to get a long enough run to still generate a clearly visible curve.

The afternoon laboratory, laboratory three acceleration of gravity, went well. This term I checked for texts at the start of the laboratory period. Having those textbook  tables is useful in the lab section. 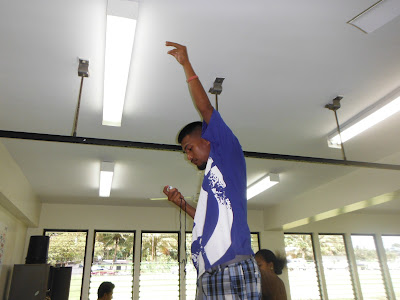 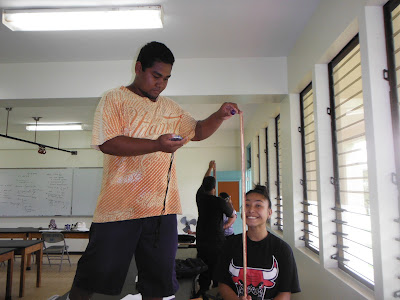 Gino drops from 200 cm while Neikaman steadies the meter sticks 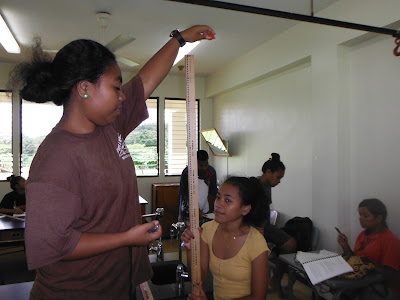 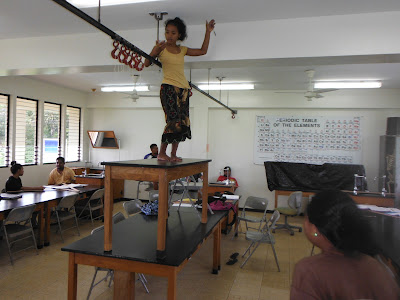 Mayleen's group had no one who could reach the ceiling, so I jury rigged this solution. The ball can be seen in flight to the right of her feet. 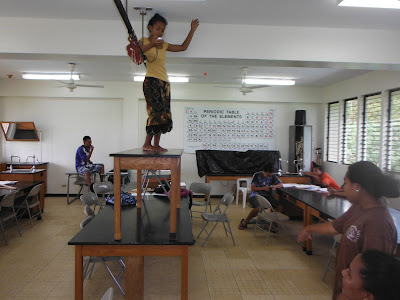 Another drop from 300 cm. The students make five drops and use the median time.

Without access to the computer laboratory, the rest of the period was used to hand sketch the two graphs on graph paper. I then worked individually with each group to calculate both the error and percentage error.
physci