February 05, 2016
Given the modification to the RipStik run on Monday, on Wednesday I modified the banana leaf marble ramp demonstration. That demonstration became a confirmation of the non-linear relationship. This did not feel like it worked. I was left feeling that the students were more confused. I also opted only to derive the velocity using the linear kinetic energy, not the linear plus the rotational. I think this is now a mistake. Go ahead and let loose the math on the board. 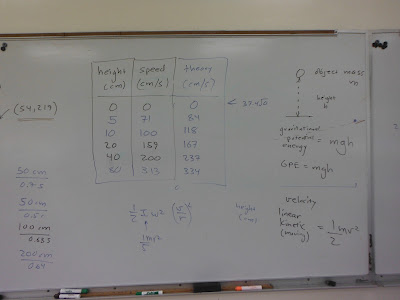 In fact, my thinking at this point would be to lead off with the equations, make the predictions, and then try to confirm with the banana leaf marble ramp. In other words, put the power prediction up first to mimic "and the electron already knew what to do..." portion of the laboratory one Dyson quote. I think this might be more startling for the students. 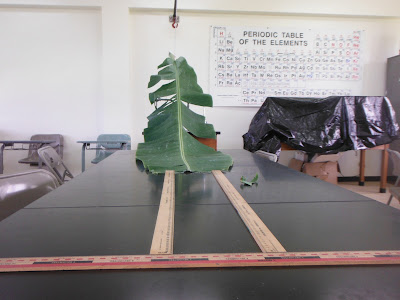 This term I again opted to start laboratory four without significant scaffolding. I followed closely to the structure of the laboratory as performed fall 2015. I again chose to put the mathematical definition of momentum on the board at the outset, noting that momentum is a conserved quantity. I wanted to provide some frame work for the laboratory, and to tie the laboratory back into the conservation concept met the day before, the conservation of energy. 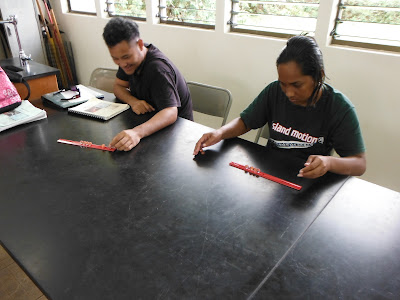 Erwin and Hellen study the system

The only other structure I provided was three questions written on the white board. There was no further structure other than the students pre-existing experience of the first three laboratories in the course.

Question one was what happens when marbles collide with other marbles on the ruler? I drew a diagram of a one marble inbound and two marbles inbound and asked what happens? Guesses included "all marbles will move" and "an equal number will move." 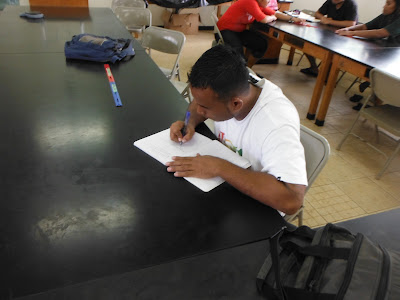 The second question was whether there is a relationship between the number of marbles into a collision and out of a collision? Can a table or graph be made to display that relationship? 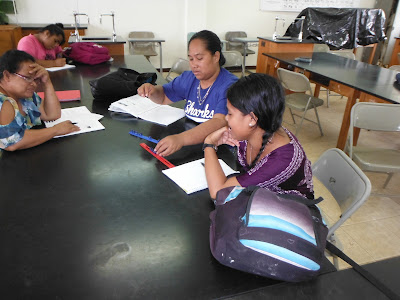 Lining up the marbles 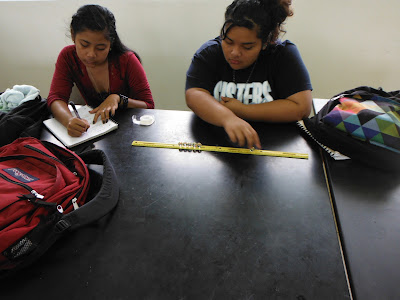 Building off of a William Gilbert (1544 - 1603) caution that those who repeated his experiments should "handle the bodies carefully, skilfully, and deftly, not heedlessly and bunglingly." [The Scientists, John Gribbin, page 71], I suggested that care, skill, and careful observation would be important. I also noted that the ability of results to be repeated is important in science. 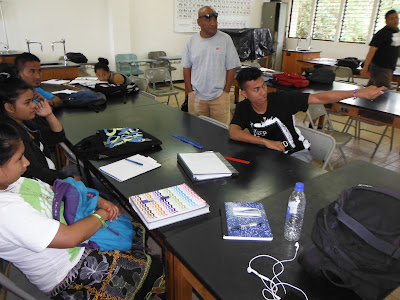 Ernest Jade Paul explains the finding from his group

This led naturally into an introduction to the two parts of the laboratory: an exploration of the system and then a reporting to the class of what was found. I noted that the groups might have the same findings, and that is not only all right in science, that further validates the result. In fact, in theory if the system behaves consistently then all of the groups should reach a common set of answers to the questions. 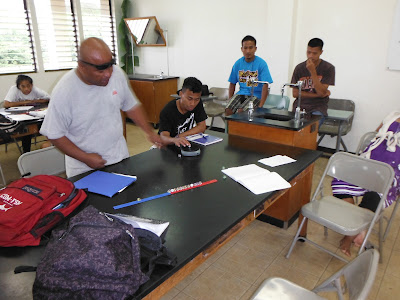 This is a laboratory that performs variably well term to term. There are terms when the students actively engage in open exploration of the system in the spirit intended. There are other terms where the students as a group do not actively engage. I remain unable to determine the dynamics that leads to one or the other outcome. The current unscaffolded approach appears to be behaving better than one in which up an up front demonstration is done and I focus on asking how the second marble knows to go or to stay. That said, the 8:00 lab class seemed like it went better than the 11:00 lab class. As I have noticed in the past, the 8:00 class is willing to linger in the lab and mull over an experiment. The 11:00 section is usually more interested in getting the laboratory done as quickly as possible. I suspect an interaction with the time being at the lunch hour, but I have no substantive evidence that this is the case. 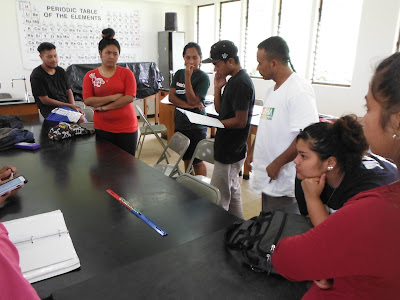 Jeff Aizawa reads from notes made by others in his group

There have been terms I provided much more structure, hoping to demonstrate conservation of momentum by calculating the mass and velocity of the inbound and outbound marbles. The students invariably become lost in the mechanics of gathering the data, and wind up not seeing the forest for the trees. Worse, the marbles lose a lot of momentum, due in part to "spin down" of the inbound marbles and "spin up" of the outbound marbles. Speed is affected more than mass, thus conservation of momentum is never actually shown. 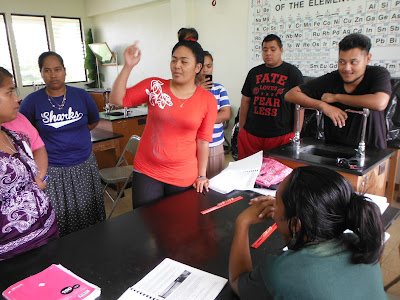 The downside to the dropping of the up front demonstration or the use of a more guided investigation is that the students usually settle on a "number of marbles in versus number of marbles out" graph with a slope of one. That seems somehow less satisfying that a true momentum in versus momentum out result. And some students shifted to mass in versus mass out when they realized the marbles have differing masses. One group even suggested that while the number is conserved, the mass is not. And that is a success: I have students exploring a system, testing hypotheses, and coming up with their own theories. I could not ask for more. 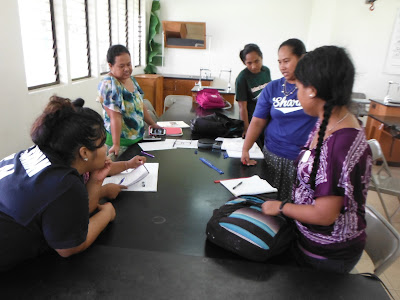 The write up is an introduction, data table, graph, and analysis of results submitted via Schoology. 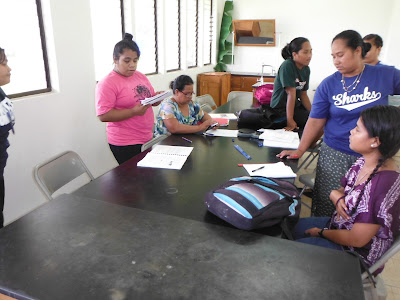 Beverly-Ann Robert continues with the explanation

During the explanation and presentation phase the students moved around the room. I noted that science is not science until it is communicated. I also noted that presenting to peer groups would be a feature of any future career. Explore and then explain is the model. 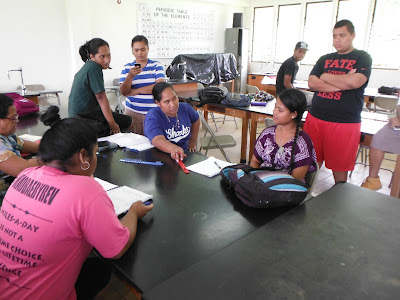 Darleen Charley also presented on behalf of the group

The board shots indicate the level of minimalism in the laboratory. This is intentional. I remain uncertain whether to include the conservation of momentum statement. Yet I also know that this concept will not necessarily arise naturally, in fact I have never seen the fully formed concept that mass times velocity would be a constant. The laboratory does not lead to that conclusion. The lab leads to the conclusion that numbers are conserved, mass might or might not be conserved, and velocity is always lost.

Still, to have never mentioned that momentum is known to be conserved, to hope that the students might yet construct that fact, seems too big an omission for a physical science class. The students should get to stand on the shoulders of those who have come before. I swerve away from pure blank sheet constructivist education. There should be some facts, and the conservation of momentum is useful fact that ultimately underlays the behavior of the marbles.

The laboratory reports that came in include tables, graphs, and discussions of the answers found to the questions. Some students felt that they had some evidence that the number of marbles is conserved while the mass is not conserved. In engaging in these explanations the students were doing science. As with any science as a process they might develop theories that may later need revision or may be discarded when evidence to the contrary arises.
physci