February 01, 2016
This term a fast lunch left me extra time to contemplate a more complex setup to the week four Monday RipStik demonstration of the conversion of gravitational potential energy to kinetic energy. 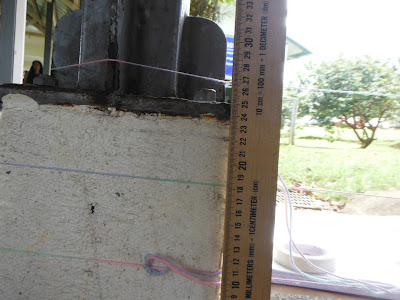 I used yarn tied off post-to-post. Set up began around 11:30 for the noon class. The three strings above run off to the right to three separate posts up slope. 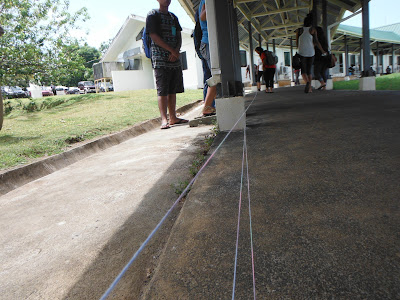 Strings running up slope. These did prove slightly problematic for the noon class change, some students did snag on the lines, most stepped over the lines. Line set up took the bulk of the half hour prior to class, this really could not be done during class. 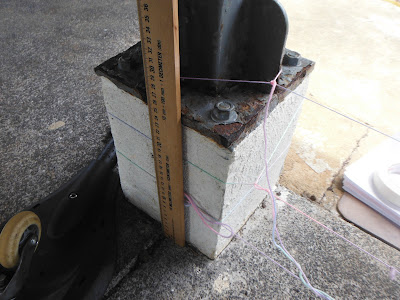 The base post is at the junction to the A building. 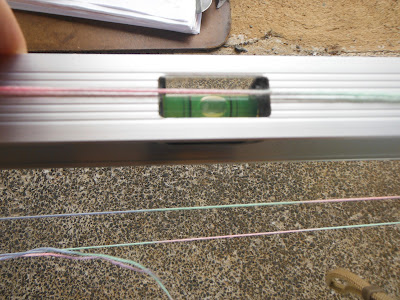 A level was used to try to get the lines level. This permitted my measurement of the fall distance. I did not try to explain that I was measuring vertical height, with the setup the measurement was somewhat self-explanatory. In my presentation to the class I referred back to a question that arose week three: does the velocity actually change for falling objects? 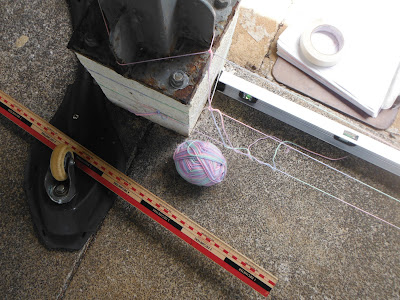 The masking tape went unused, but the meter stick was very helpful. As was the yarn. 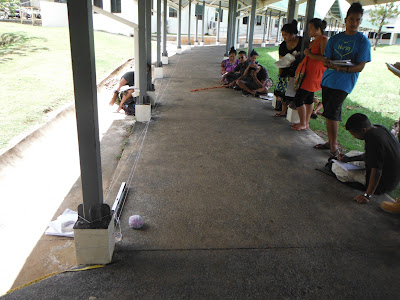 To determine my velocity at the bottom of the slope I turned right towards the A building and timed the duration from the base post to the next post, a distance of 300 cm. There are all sorts of problems with doing the measurement this way, but there is no way to directly my actual speed as I pass the post at the bottom of the run. 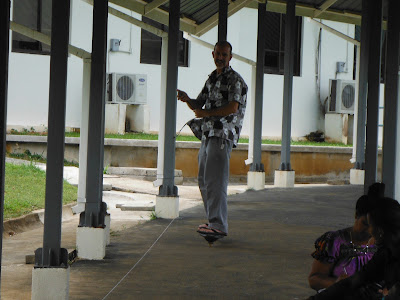 Here I have taken off from the "highest" location - a 28 cm drop. I had begun with zero height is zero velocity at the hill bottom. The first post had a drop of 10 centimeters and produced a 2.56 second duration across the 300 cm run-out at the bottom of the hill. 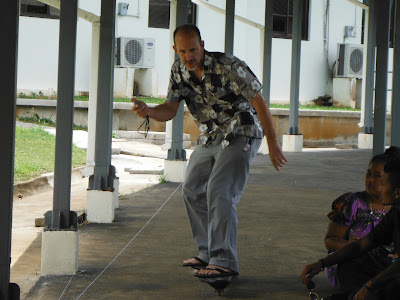 The 18 centimeter above base second post run seen on the further left above, produced initially a 1.77 second 300 cm run-out. But the run see above produced only a 1.72 second run-out across the same 300 cm. So I went back and measured the second post again. This time I obtained 1.98 seconds for 300 cm. Obviously five runs and using the median would be best, but that would require more time than I had available to me. 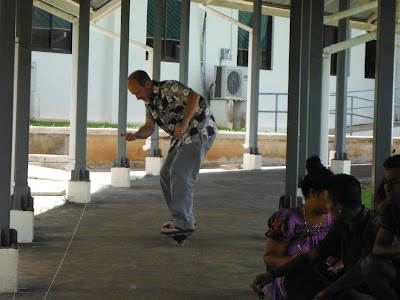 With the January trade winds creating a head wind, I crouched a little to try to reduce the impact of the head win. 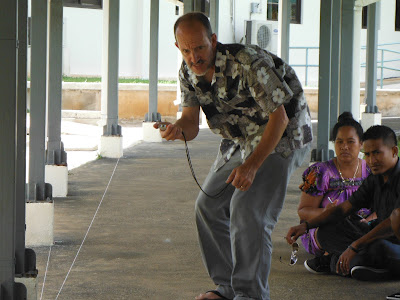 Kamerihna and Gibson observe as I come into the bottom of my run, two lines can be seen of the three on the left. 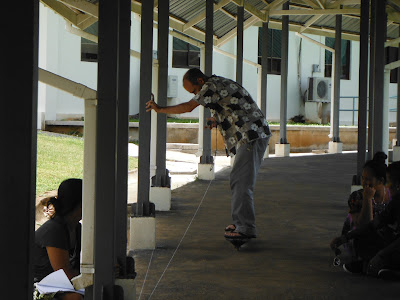 To the best of my ability, I started all runs from an initial velocity of zero. This was unstable and difficult, but I did want to avoid carrying an initial velocity term. Above is the rerun of the second post to try to obtain separation from the 1.72 second, 174 cm/s third post. 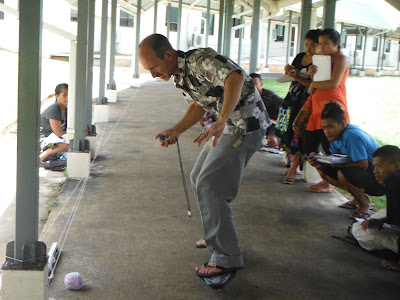 Heading into the turn and the 300 cm timing track. I used the tape reel measure for this segment. 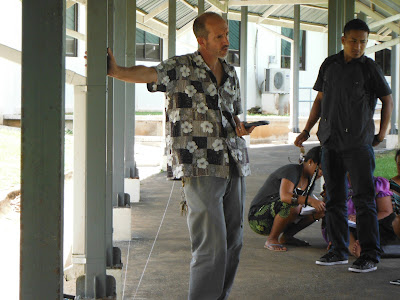 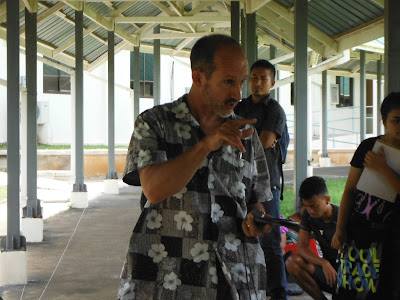 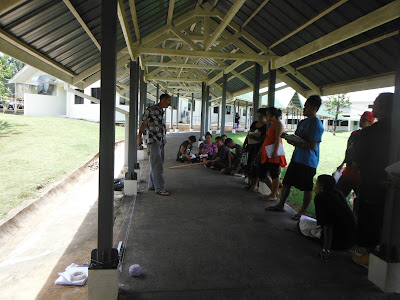 The sidewalk is far from an ideal listening and speaking environment. The class was stretched out linearly along the sidewalk. Still, being outside beats being in a traditional rows and columns classroom. 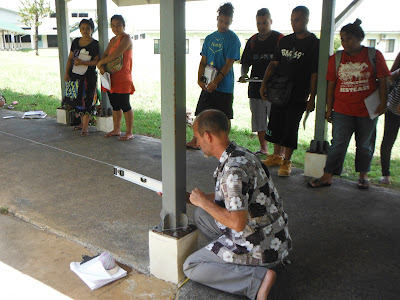 I decided  I wanted one run from farther up. I ripped off the three string lines and then tied them all together to make a long line which I ran up sidewalk to a distant post. This line, once leveled, did cross the sidewalk in an obstructive manner. And the drop height was 54 centimeters. 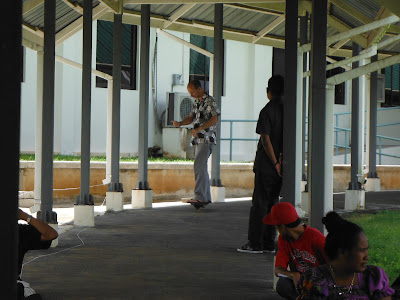 The top of the 54 centimeter drop. 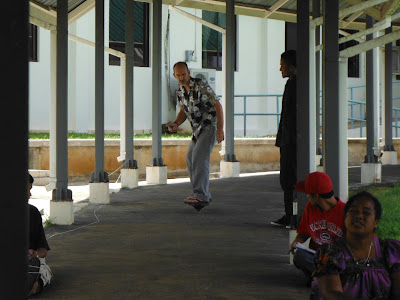 Downbound on the 54 cm drop. 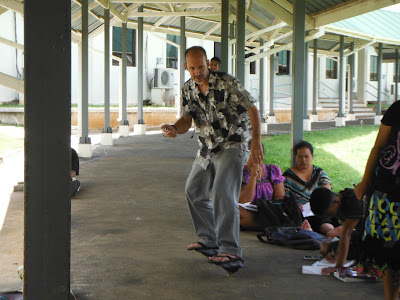 Swinging out to make the timing turn, Bee Heartly on camera at the turn. I knew I had to swerve sharp enough not to run into her. 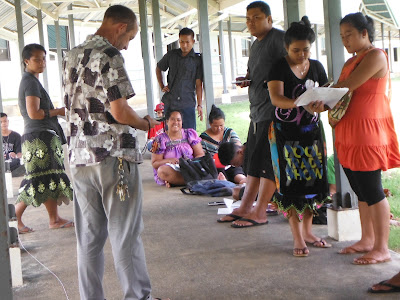 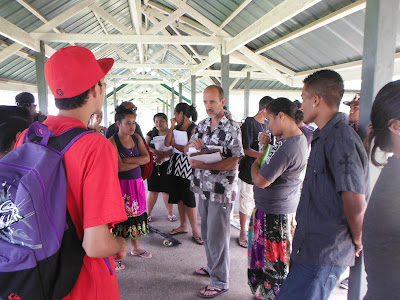 Class wrapped with my passing out of the test from Friday and quick oral coverage of the answers. Once back in my office, I ran the numbers into a spreadsheet, unsure of what I might obtain.

Given that the second post had produced times of 1.77 and 1.98, I had no idea whether there would be any actual pattern to the data. 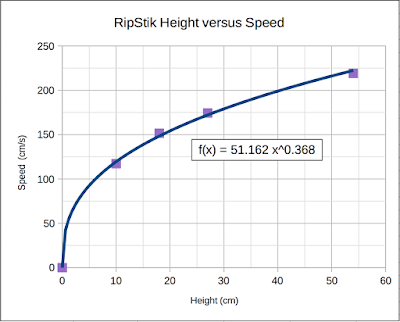 I was more than surprised when the data fell onto a smooth power curve. The speed increased, but in a non-linear fashion. This will now mimic the banana leaf marble ramp data and would allow me to set aside the linear model altogether should I choose to do so. This is certainly the RipStik kinetic to gravitational potential energy conversion on steroids. I rather doubt I will do so well in the future.

Past efforts have focused on showing that kinetic energy is indeed converted to gravitational potential energy. Spring 2015 this only managed to show an 83% loss and did nothing to make Wednesday's work make sense. This term I did not use any energy terminology, phrasing the exploration as one of how speed varies with height. What was done today should segue better into the banana leaf marble ramp data I hope to generate on Wednesday. In fact, this data almost appears better than that data. The choice to toss on a 54 cm run and drop test coverage paid off handsomely as seen in the good fit above.

Note that Microsoft Excel usually "chokes" on power relationships that pass through (0,0). The above chart was prepared using LibreOffice.org Calc.

Student performance on the Friday quiz was suboptimal. The students were still confused about the rate of change of velocity with height and that the rate decreases even as the velocities increase. I redid the RipStik run on the following Monday, skipping the leveling lines. I used a 200 cm final stretch and three timers to get my hill bottom speed. This worked better. I used the median time. From the 27 cm height I had 256 cm/s and from the 54 cm height I achieved 317 cm/s. I was faster, but not twice as fast for twice as high. Having the students run the timers helped. Chalking the sidewalk for the 200 cm timing stretch also helped. Attempts to use a ball failed: the ball will not track straight.