January 11, 2012
A convenience sample survey of 73 students in the MS 150 Statistics class at the College of Micronesia-FSM Palikir national campus 09 January 2012 asked about social media membership.

Number of students with membership in the listed site by term Note that the columns do not add to the sample size as students can have multiple memberships. 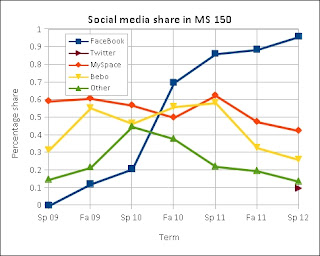 FaceBook continued to extend its dominant position among students in MS 150 statistics at the college, with 96% of the students having a membership in FaceBook. MySpace, Bebo, and "other" sites lost market share among the students. Not shown above is that while some students only use FaceBook, no student only uses another site.

In the first survey of Spring 2009 FaceBook was listed as a social media site. Although 83% of the 54 students used social media sites, none indicated FaceBook membership. A second survey conducted in February of 2009 indicated that 13% of the students had FaceBook membership. The presence of the site name on the January survey may have driven some students to explore and join FaceBook. The listing of Google+ on the survey this spring may cause students to now explore Google+ and consider joining.
statistics tech