February 20, 2009
An initial survey at the start of the term suggested that 83% of the students in MS 150 Statistics were using a social networking site. In that survey many students included sites from the broader definition of social media sites such as on line email sites. As a result I decided to resurvey using the term "social media."

As I noted in my blog, given the atmosphere of disapproval surrounding social media the college, I felt like I had "gone over to the dark side." My students, however, were now aware that I too was using social media. Seventy-four percent noted that they wanted faculty in social networking space, so my presence was not as unwelcome as I had once thought it might be.

Where the first survey indicated that 83% of the students use social networking sites, 91% responded in the second survey to using social media sites. The students also responded with a far more detailed list of the sites being accessed. While five students (9%) did not choose to answer the survey, and thirteen (25%) listed only one site, 35 students (66%) listed two or more sites. Over half of the students, twenty-eight, access three or more social media sites. Three accessed six or more, with one listing twelve different sites. 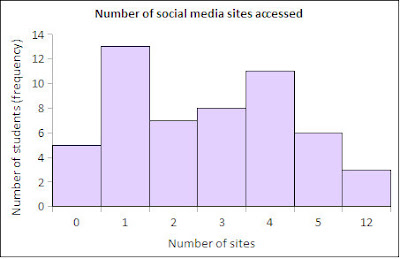 The fifty-three students listed twenty-nine different social media sites. The "market share" of the top three social media sites among the statistics students was led by MySpace. Sixty-six percent of the students use MySpace, 45% use Bebo, and 36% use Tagged. Note that the numbers add to more than hundred as many students have two or more memberships. The surprise was in the diversity: students listed 15 sites for which they were the only member among the 53 students surveyed. Global social networking leader FaceBook has only a 13% share of the students surveyed.

Clearly social media is having a negative impact on the college's bandwidth. Anecdotally some students are effectively addicted to the sites and their usage level is impacting their ability to get schoolwork done, not unlike a substance abuse problem. Theoretically the college could seek to shut down all access to these sites. Yet once the students leave the college, how has the college then prepared the students to manage this technology?

Anything can become a waste of one's time. Talking on the telephone, email, television, and even committee meetings, if not time managed, will negatively impact one's productivity. College's have always risen to the occasion and assisted students with the task of learning to manage their time. Some students are struggling to balance the siren call of friends who posted a comment on their social networking site and the demands of a college education. Basic email efficiency techniques translate fairly well into social media space.

"Touch once, act on it, and file," is a useful approach to handling posts from friends. Using a "cut-and-paste" list of common responses can also be a time saver. Cut, paste, personalize, and post. Social media are simply another tool in the communication tool box. Learning polite ways to drop out of a chat is also a necessary skill. Many of the features of e-learning spaces such as asynchronous private group discussions and synchronous group chat facilities are already built into social media spaces.

Much of my effort in this series of explorations of new technologies is an effort to find new options for communicating with students in addition to existing communication pathways. Anecdotally, with midterm approaching, one technology does appear promising. Cell phone text messaging. This term I acquired a cell phone and provided the number to all of my students. In turn, 39% of the students shared their cell phone number with me.

I have received more inquiries for remote help with homework via SMS text messages than I ever received on my land line. I have not surveyed to determine the attraction for students, but one can surmise the reason students use text messages. Many have cell phones, few have computers. Homework is often being done away from a computer, possibly remote from a telephone. At least one student texted for homework assistance while her siblings pounded sakau in the nahs behind her. Text messages also avoid having to "speak to an elder" - a very real cultural barrier for some of the students. The students also know that they will not "disturb" me with a text message. A land line phone might wake me up should I turn in early, but I have made the students aware that I turn my cell phone off at night so they can attempt contact via cell phone without worrying about catching me at the wrong time.

New readings on faculty and parental ethics on social networking sites:
Social Networking Guidelines for School Employees
Parental faux pas on Facebook
How Not to Lose Face on Facebook, for Professors