September 11, 2011
Laboratory 042 was following the constructivist variation piloted spring 2011. I ran the set-up in the same manner in which I set-up last spring and last summer. I first asked the students to predict the result prior to any marble collisions. Then I released one marble on a shallow ramp. The marble rolled down and collided with a line of five marbles of roughly equivalent mass. 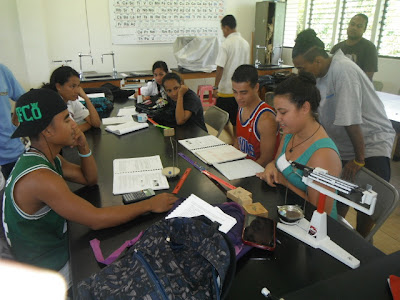 I repeat this with two, three, four, five, and even six inbound marbles. For the latter cases I shift the focus to the "break-away group" retaining the inbound number as the released marbles also tend to continue on post-impact and eventually off the ramp.

Once the students grasped "marbles in" equals "marbles out" then I focused on the penultimate marble. 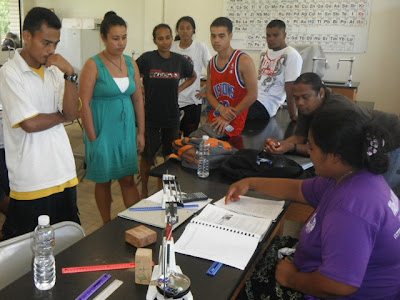 I then demonstrated that "speed in" is equal to "speed out." When I asked the students to formulate explanations one student suggested that the "force" was the reason. I then usually return that back to them, "What is force? What is pressure?" "Why does that cause only an equal number to be ejected from the line?"

This term as in prior terms I had the opportunity to discuss the misuse of "magic" words that the speaker does not actually understand. For many of the students, tossing around "force" is the equivalent of saying "magic." Neither word explains how the marbles "know" what to do. 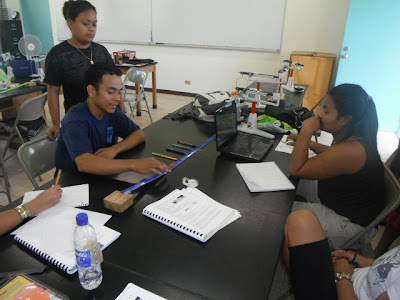 Rico's group took the approach of measuring outbound speeds only over a distance equal to the inbound distance. This ought to have reduced the errors introduced by friction for the lower velocity impacts. They came up with this approach on their own. 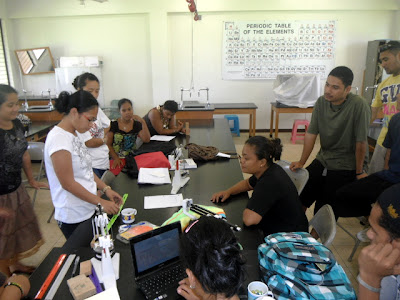 Katsandra shows their marble placements on the ramp

Once the students have their minds wrapped around the mystery of the marbles, I ask them to form small groups and to try to attach numbers to the system. To make qualitative measurements of mass and velocity for the marbles. I provide no further guidance nor correction. I do circulate and try to be helpful to groups that seek assistance. 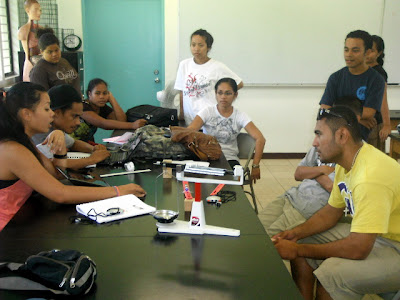 Although I had suggested a three ruler set-up after the summer run, I went ahead with the two ruler set-up I had used in the past. Unlike summer term, all of the groups found approaches to measurement, building tables and graphs. I now do not know they the students this past summer seemed to be unable to move forward. My only hunch is that the summer term is too fast, too furious.

With the groups apparently moving forward, I intentionally stepped out of the laboratory for over twenty minutes. I wanted the groups to wrestle with the equipment and the set-up on their own. Whenever I am present, the students look to me for answers and, most often, confirmation that they are doing the laboratory correctly. "Is this right?" they ask. 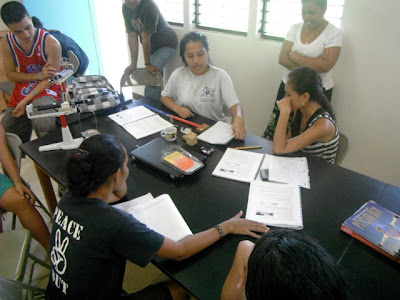 Jessica Nanpei explains, her partner Charleen on the right, Deffeny at the back

I always face questions when I return, but by then most of the groups have started making measurement of one sort or another. I remain fascinated by the fact that a number of students still do not fundamentally grasp what speed means from the point of view of trying to measure a speed. That speed is distance divided by time is well covered by the time of laboratory four, yet there remain some students who cannot translate that abstract understanding to measurements in the laboratory. My sense is that there are many students who pass laboratory science classes with good grades but little more than a very superficial understanding of the material that they have encountered.

This term I had prepped the students to not form groups of four shy students, that each group would need a presenter. This seemed to help. 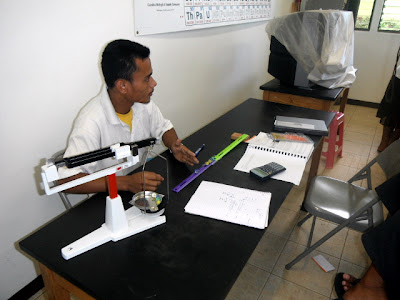 Elbert explaining the set-up used by his group

I still feel, as I did last summer, that a modification of the set-up might be useful. All the groups that tackled inbound speed tried to measure the time versus distance on the sloped ramp. The groups were all using a two ruler set-up. The result is a underestimated inbound speed. A three ruler set-up, one ramp and two on the flat, five marbles at the junction of the two on the flat, might provide a more visually obvious way to measure the speed of the inbound marbles.

This term I tackled the issue of an underestimated inbound speed by reaching back to a finding of laboratory three: speed increases when an object accelerates. I put on the board the following:


I explained that if the above numbers represented the speed of a marble as it accelerated down a ramp, then the speed one obtains by dividing the distance by the time is the average speed. The sum is 30, divided by six numbers, is five centimeters per second. I argued that the average is typically half of the actual terminal velocity at the bottom of the ramp. I intentionally avoided going symbolic in this explanation as that would surely lose the class.

The above came up because a couple groups had good enough numeric data to "confirm" that the outboard marbles were moving faster than the inbound marbles. 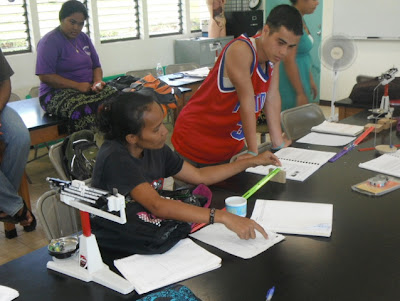 Jonnie explains as MacArthur looks on

Three rulers might help, but there is good bit of speed loss on the ramps and the junction between two ramps is usually problematic. Ultimately the marbles will never be as good as air carts, but air carts are definitely magic and marbles are everyday.
physci