June 10, 2011
Rain prevented running a demonstration of trading off gravitational and kinetic potential energy using a RipStik. I moved directly into the banana leaf height versus velocity lecture-demonstration. 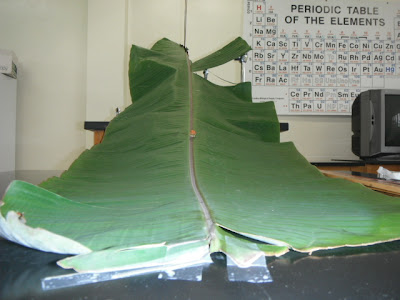 The leaf a tad too small and tied a little too low, 40 centimeters proved to be the upper limit on the marble release height. This limited the apparent curvature of data results. Larger leaves with longer petiole would be useful. 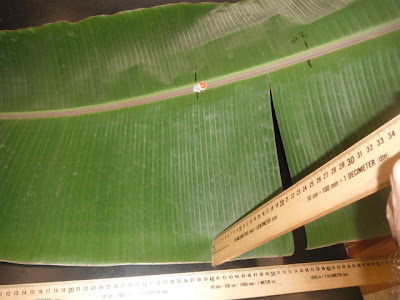 Maybe the odd midweek start is to blame, maybe something is different in the air, maybe I am not getting connecting, whatever the cause, the students appear to be more perplexed than last summer.

Laboratory 042 was intended to follow the constructivist variation piloted this past spring 2011. I ran the set-up in the same manner in which I typically have done. I first ask the students to predict the result prior to any marble collisions. Then I release one marble on a shallow ramp. The marble rolls down and collides with a line of five marbles of roughly equivalent mass.

I repeat this with two, three, four, five, and even six inbound marbles. For the latter cases I shift the focus to the "break-away group" retaining the inbound number as the released marbles also continue on post-impact and off the ramp.

Once the students grasp "marbles in" equals "marbles out" then I focus on the penultimate marble. 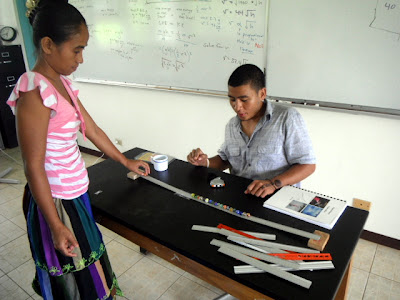 Jackleen and Lewis
I then demonstrated that "speed in" is equal to "speed out." When I ask the students to formulate explanations I often get answers such as "force" or "pressure." I then usually return that back to them, "What is force? What is pressure?" This term as in others I had the opportunity to discuss the usage of "magic" words that the speaker does not actually understand. For many of the students, tossing around "pressure" is the equivalent of saying "magic." Neither word explains how the marbles "know" what to do. 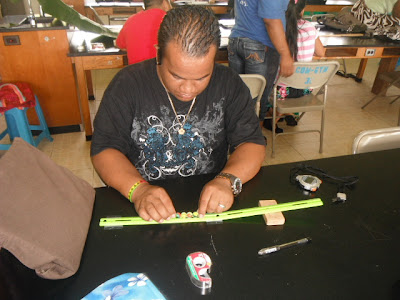 Raynard
I almost always tie this back into the Dyson quote from laboratory one. The marbles know what to do and are doing it. Once the students have their minds wrapped around the mystery of the marbles, I ask them to form small groups and to try to attach numbers to the system. To make qualitative measurements of mass and velocity for the marbles. I provide no further guidance nor correction. I do circulate and try to be helpful to groups that seek assistance. 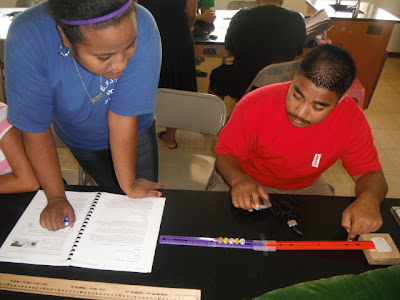 Joyleen Isaac and Jeremy
Although I ran the explanation much as I had done during the regular term, the students seemed far more unsure as to what to do. Unlike spring term, no group had any initial idea of what they wanted to investigate. 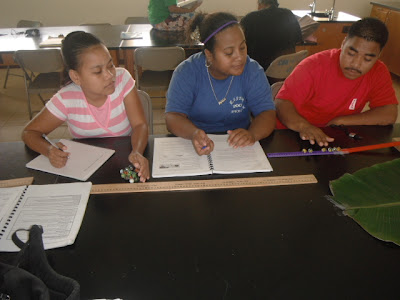 Nayleen, Joyleen, Jeremy
I moved from group to group trying to answer specific questions, to provide support without providing scaffolding or guidance, but the class was simply reacting in a far different manner than the students had spring term. 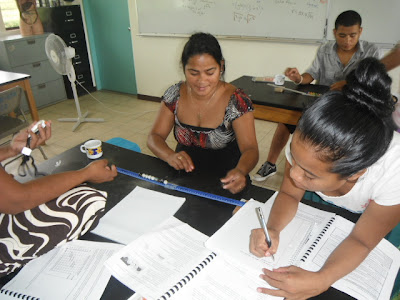 Merseny and Tracy
I had the strong sense that the high speed three day rocket shot from linear motion to momentum had been too fast for the students. Where the regular term provides three weeks in which to cover this material, and ample opportunities for work to be turned in and returned to the students, the summer schedule afforded no such luxury of time. 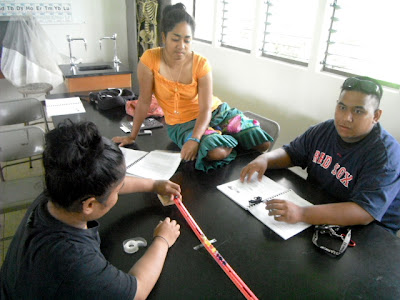 Maimai, Kemble, and Arthur
Whatever the cause, the groups had little in the way of data to present after an hour of working with the marbles.

My current sense is that I need to spend more time up front with the students gathered as a group. More questions and answers - a little bit more scaffolding than virtually none. Questions with some guidance embedded in them, "How might we measure the mass in?" "Mass out?" "Speed in?" "Speed out?" 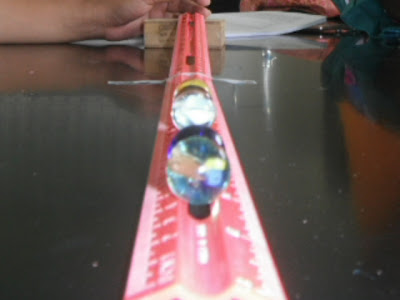 A modification of the set-up might also be useful. All the groups that tackled inbound speed tried to measure the time versus distance on the sloped ramp. The groups were all using a two ruler set-up. The result is a strongly underestimated inbound speed. A three ruler set-up, one ramp and two on the flat, five marbles at the junction of the two on the flat, might provide a more visually obvious way to measure the speed of the inbound marbles.
physci