June 09, 2010
I opted to begin 041 as I did last spring, using the RipStik to attempt to illustrate the trading-off of gravitational potential energy due to position for kinetic energy. The parking lot has a very gentle slope, downhill is free. Yes, I am lecturing while riding a RipStik. LA Peter was on the camera. 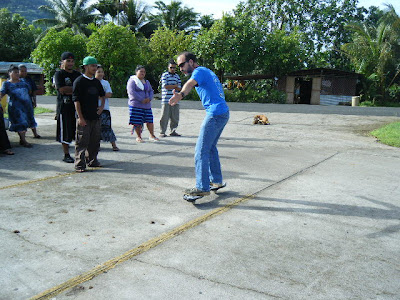 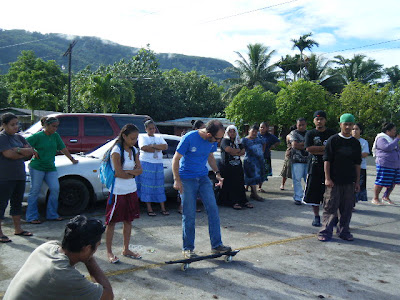 After returning to the class room, I went ahead with the banana leaf marble ramp exercise. Jessica predicted a direct linear relationship, twice as high would be twice as fast.
Data on the board clearly showed a non-linear relationship. Note that I chose to neglect the impact of rotational kinetic energy and ran my theoretic calculation using only linear kinetic energy. This results in an overestimate of the speed of the marble for a given height h, but the shape of the theoretic line parallels that of the experimental data. 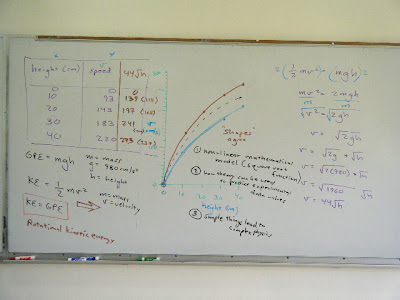 The modifications continued with the restructuring of laboratory 042. Part two of the laboratory was dropped - the morning lecture had already featured a complex mathematical square-root model. On the board I wrote that the students were to determine the rules for marbles colliding with lines of marbles. How many marbles into a collision produces how many marbles out of a collision? How is the speed of the inbound marbles related to the speed of the outbound marbles? 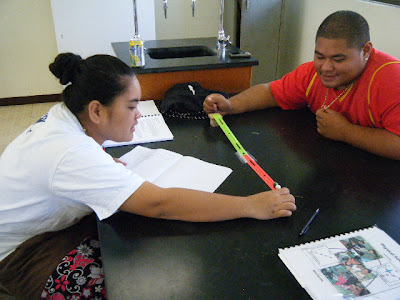 The laboratory was done on rulers in the 9:30 class, and on rulers and banana leaf marble ramps in the 1:00 class. All marbles were regular duck marbles with a mass of roughly five grams. The marbles were not, however, massed, and no velocities nor momentums were calculated. The class was encouraged to experiment. 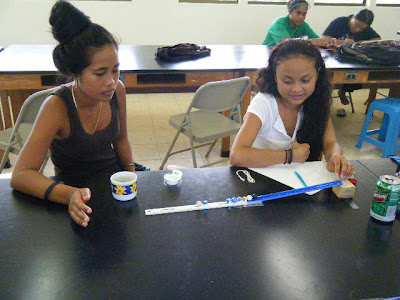 I did begin with a demonstration of a single marble colliding with a line of five marbles. In both classes I asked the students to make a prediction on the result of the collision. Both lab sections made two different predictions. The first prediction was that all marbles would move. A few predicted that only one marble would move outbound from the line of five marbles. In the afternoon section Juanita suggested that two marbles would be ejected for a single inbound marble.
The left board at 1:00 with the introduction and questions to be explored. 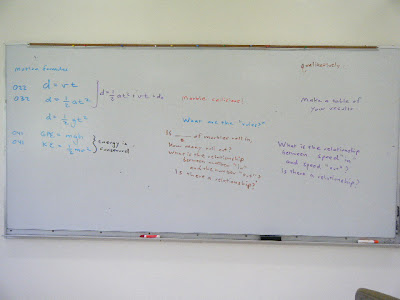 The right board is the result of a wrap-up question and answer discussion. Jessica thought that academically stronger third graders could probably engage in the "How many marbles come out for a given number of marbles in." Pertin was less certain his fourth graders would be able to engage in the activitiy. Glorina noted that even if run at the simplest level, first graders would not understand the activity.
I noted that somewhere around fourth or fifth grade students could probably engage the material. At seventh or eighth grade I would certainly build a table and then plot the in versus out to generate a simple xy scattergraph with a run of one and a rise of one - a unitary slope.
McHelita and Tarsis working with the marbles.
physci