August 29, 2019
One of the challenges within iNaturalist for student use of the platform is that students have a reputation for posting what are deemed by some iNaturalists as low quality observations. These observations often get posted in large numbers as students strive to meet some quota artificially set by a well-intentioned teacher. The observations also often get posted either as "unknown organisms" or, when identified, identified incorrectly. Many cultivated plants get posted incorrectly as wild plants due to the platform providing a green tag that says "Research Grade" only on wild plants. Some teachers mistakenly require students to obtain a specified number of RG observations. This may result in students teaming up to validate each others incorrect identifications in order to obtain the RG designation. The students then often "vanish" from the platform after the "assignment" by the teacher, leaving for identifiers on iNaturalist the task of cleaning up the perceived mess.

I realized that one complication would be that accounts with zero observations are taken to be potential spam accounts, one has to have observations to avoid the automatic spam filter. This is a complication I have not completely solved, not yet. I did adjust the first day plan from having all the students practice identifying on the iNaturalist platform to having those with a smartphone go outside and make some observations and then return to the classroom. I am also hoping that by following my students on iNaturalist, and having them in turn follow me, this might forestall auto-deletion for zero observations. At some point I will have to find ways for students without personal technology to make observations. Currently I am simply encouraging them to try to acquire personal tech.

I opened the class by showing the students data from the Global Biodiversity Information Facility. I showed the students a Tacca leontopetaloides observation by M. Takamatsu on Harushima island in 1935. Harushima was the Japanese name for Weno in Chuuk state. That record is with Bernice Pauahi Bishop Museum in Hawaii. Then I showed the class my own observation of Tacca leontopetaloides in Weno, with my name recorded there in the GBIF record. I used this to explain to the students that iNaturalist feeds biodiversity databases, that the students will have to take responsibility for making appropriate observations, well documented observations, with careful identifications. This is real science and the students will be the scientists. 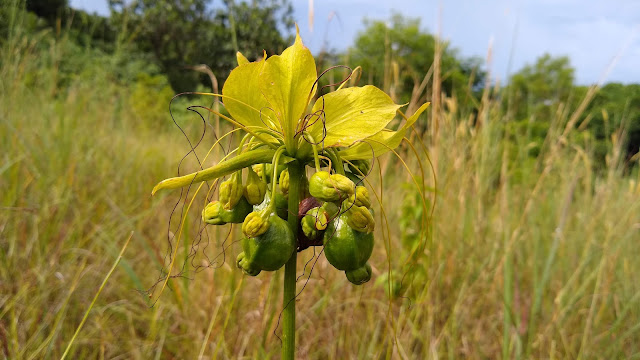 I had the students doing identification work with the following list of plants - this allows me to follow-up on their identification confirmations, and also steers them clear of trying to make the initial identification on these plants. These plants are fairly common on these islands and most of these are also found on campus.

The links also pick up casual/captive observations, giving the students more plants to work with and, in the process, having them also work on plants that will not be picked up by other databases. Many of the above plants are cultivated/captive plants, or have large numbers of cultivated plants in their population. In some sense this works to minimize the potential downstream negative impact of a student making a confirmation where they should not have confirmed the identification. Too, I can follow the links myself and see what confirmations or disagreements my students have been making. If I see any issues, I can work directly with the student during the term ahead of us. This provides me some oversight in the early stages of the students work on iNaturalist.

In class I handed out a two page handout on selecting an appropriate username in iNaturalist, making identifications, and on making observations. The handout on making observations is a lightly edited version of the iNaturalist Teacher's Guide. I also ran a presentation on using the Android app. The presentation was only screenshots which I showed as I demonstrated using my smartphone. The presentation was projected on the 84 inch SMARTboard and allowed the students to see what was on my smartphone. I would later stumble into the realization that the iOS app is laid out in a wholly different way.

I am able to pick up observations being made here on Pohnpei. Outside of the occasional visiting tourist, many, most, perhaps in some sense all, of the observations at this point are coming from my students. So a geographic filter can show me what they are doing. I briefly covered the use of the computer vision feature, noting that this was available on WiFi only. I suggested they take the higher level Genus or Family recommendation unless they were certain about the species. I am also following all of my students, so here too I will pick up on their observations and can help in the identification work. I set no specified number of observations, on the contrary, I suggested that they go and make a single observation for a start in using the app.

My hope is that the two pronged approach of following my students and following up on their identifications will allow me to help prevent the problems noted in the opening paragraph. This is also week two of the sixteen week term, which provides me more time for corrective action than I gave myself in the spring of 2019 where I first used the apps in April nearer to the end of the term.

I did not get the chance to go outside with the students who went out to make observations. Of 25 students, only two students made observations during class. One student made an observation in the days prior to the class. This is an area that could be improved upon. Perhaps the first day should be sign up and observe using the app only, with those who lack technology following along with those who have technology. I used this approach in the spring, letting the students form self-selected groups around a student who had technology. The student with the tech did the observing, the others watched. This worked well last spring. That would effectively push identifications onto a second day, and that would be the day to be in the laboratory. There the remaining students could sign up and then identifications of the plants photographed on the previous day could be worked upon. I had the sense that we tried to do too much at one time for a class of 25 students, and the schism with some outside and some inside did not work well.