Ethnobotanical Use observation field in iNaturalist

May 21, 2019
iNaturalist has a mission of connecting people to wild nature in a social spirit of citizen science. The platform produces data of use to researchers in a variety of fields, but the primary intent is to encourage people to get outside and experience wild nature. 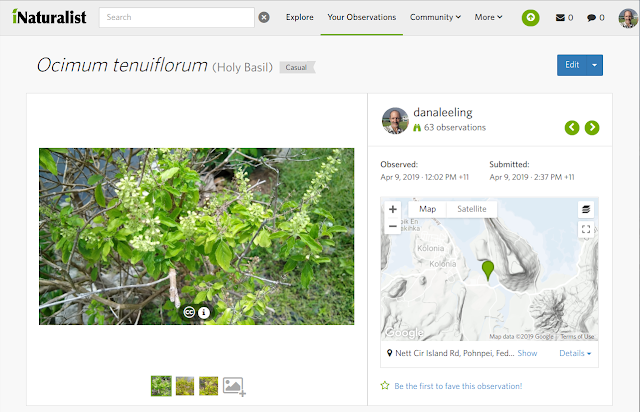 While the core functionality of the platform centers on making and identifying organisms, the observations support additional fields including Ethnobotanical Use, Common Name in Local Language, and Local language used for common name. These optional fields provide support for including ethnobotanical information in an observation. 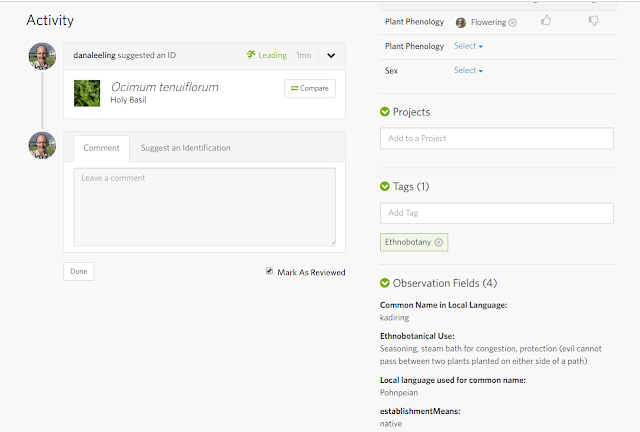 Observation fields can only be created and edited from the web interface, not from the smartphone apps. My own workflow is to upload images taken with my smartphone via the app and then edit the images on the desktop interface later, adding plant phenology notations, establishmentMeans, and, as appropriate, the fields related to ethnobotany.

In the edit mode, fields can be added at the bottom of the observation. As one starts to type a field label, options should appear. There is rarely the need to create a new field, there are perhaps hundreds of existing fields.

The Ethnobotanical Use field is a text field. The first time one uses a field one might have to type more of the full field name out, after the first use, the dialog box will remember recently used fields as seen above.

The specific definition of the Ethnobotanical Use field. 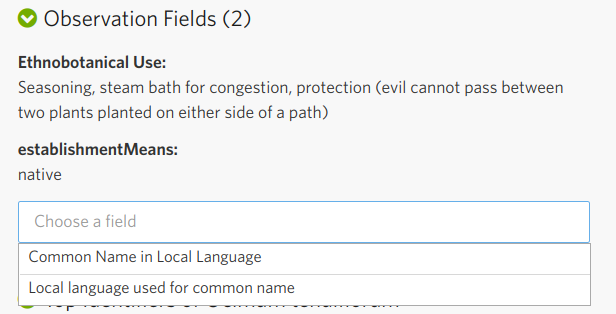 In conjunction with the Ethnobotanical Use field, and in keeping with a tradition for ethnobotanical herbarium sheets, I have also been adding the Common Name in Local Language for the observation and the Local language used for common name. These were also pre-existing observation fields.

Once the field is chosen, an additional text input box will appear. Enter the value, such as kadiring above, and select Add to save the text. There appear to be no guidelines for values entered into the Ethnobotanical Use field, I have been entering descriptive sentences on usages. 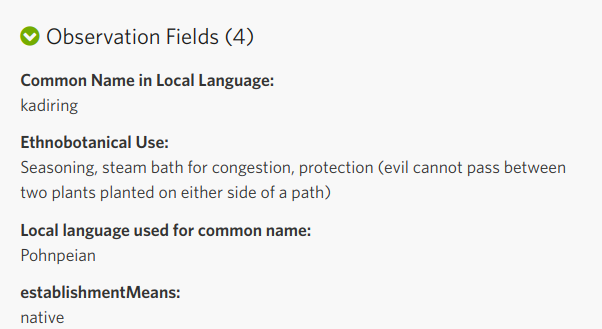 The result is now effectively an iNaturalist ethnobotanical observation. Global searches for observations with the Ethnobotanical Use can be found using the link:
https://www.inaturalist.org/observation_fields/4169

For the following, due to issues I had with URL encoding for the ampersand not working as expected, the URL will have to be copied and pasted into a browser.

To find all observations on Pohnpei with the Ethnobotanical Use field present:
https://www.inaturalist.org/observations?place_id=10595&subview=grid&field:Ethnobotanical%20Use

To find observations uploaded by me with the Ethnobotanical Use field present (location could be anywhere):
https://www.inaturalist.org/observations?place_id=any&field:Ethnobotanical%20Use&user_id=danaleeling

To find observations uploaded by me with the Ethnobotanical Use field present and limited to Pohnpei:
https://www.inaturalist.org/observations?place_id=10595&field:Ethnobotanical%20Use&user_id=danaleeling

To find Premna obtusifolia observations with the Ethnobotanical Use field present:
https://www.inaturalist.org/observations?place_id=any&subview=grid&taxon_id=156566&field:Ethnobotanical%20Use
Note that there may interactions with iNaturalist's default to displaying "Research Grade" observations, which may make some searches fail to show cultivated/captive plants unless one specifies also displaying captive/cultivated plants. A note on this distinction is included below.

Note too that the Observation fields can be set by any user of iNaturalist. The original observer does not need to be the one to add the ethnobotanical use. This can be added later by any user.

Variations on the above could be used to adapt to any place or user, or combinations thereof. The iNaturalist Forum has more details on search URLs for finding and filtering in more complex ways.