May 10, 2019
My sense in the ethnobotany classroom was that the brief use of iNaturalist was engaging for the students and contributed positively to the course. I wanted, however, a better handle on student reactions to iNaturalist, especially given that some students without smartphones only participated as a member of a group with a student who did have a smartphone. A survey was given to the 22 students present on the last day of class. Two of the 24 students were absent.

The first question asked, "What did you learn from your use of iNaturalist?" All 22 students responded that they had learned from their exposure to the app. This is somewhat interesting as some groups were using PlantNet on the day which we used the apps, and a number of students had no smartphone. In general the students reported that the app was helpful in identify plants and in learning plant names.

SC/SS 115 Ethnobotany has no pre-requisites and presumes no botanic knowledge prior to the course. The class is designed as a freshmen year three credit science without laboratory course. At other institutions ethnobotany is a junior course with biology and botany pre-requisites. The college here is a two year institution, a third year ethnobotany is not an option. And the loss of local cultural plant knowledge is real, hence the presence of the course. As a result, the course teaches both diversity (taxonomy of plants) and cultural use knowledge. Hence the "SC/SS" designation. Half the science of  botanical diversity and half the cultural uses of plants. In a course that only examined the cultural uses of plants, iNaturalist would not seem to have any useful role. In a course that includes botanic diversity, iNaturalist is a natural fit.

I wanted to know whether the students also felt that iNaturalist belongs in the course.  Twenty-one of the 22 students felt that iNaturalist belonged in the ethnobotany course. The one dissent was a student who noted, "No,... it could be helpful for all other users. Those who avoid unwanted species. For example, KCSO." KCSO is an environmental organization and I suspect the reference is to identifying alien invasive species.

The curriculum in the course is very full, expanding the use of iNaturalist would have to come at the expense of other material already in the course. The material that could be jettisoned with the least learning impact are five days during the term spent tending to and cleaning up three different ethnogardens on the campus. Clean up work often involves using machetes to take down the tropical paddle grass. The last question asked "I am considering dropping some or all of the gardening/cleaning exercises and replacing them with work involving iNaturalist. Is this a good idea? Why?" 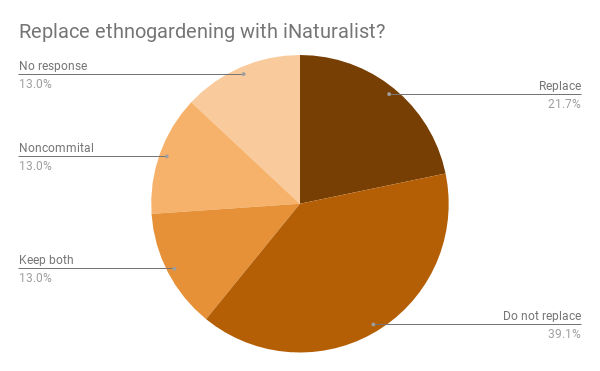 Only one in five students favored replacement of the outdoor work with iNaturalist. Some of the responses, however, suggested that a few students misunderstood this to mean that all outdoor activities including hikes were to be replaced by working with technology. There was a still a fairly clear call to retain garden cleaning in the curriculum.

Underneath this particular question is a concern that I have had as the years pass - some students are less and less capable at machete work, and working safely with machetes. Out here farming is done by hand with machetes, and some students start working with machetes from when they are rather young. Other students rarely work with a machete. At present the work is optional, students can use a machete or not.

Ultimately concerns of safety may outweigh other considerations, and there is limited learning to be done while swinging machetes.

What did you learn from your use of iNaturalist?

Does iNaturalist belong in the ethnobotany course?

I am considering dropping some or all of the gardening/cleaning exercises and replacing them with work involving iNaturalist. Is this a good idea? Why?