iNaturalist and PlantNet reporting back by the students

April 11, 2019
A week earlier I had introduced the students to iNaturalist and PlantNet in my ethnobotany class. Although I had been using PlantNet since December, I had only been using iNaturalist for 30 minutes. During the prior Thursday class I suggested that students could use either app. After the first Thursday class ended, I discovered that the Explore map interface in iNaturalist surfaced all of the students photos and identifications from the class period. I was never was able to surface the photos and identifications made in PlantNet. PlantNet has no way to filter or search contributions. By the following Tuesday I had sworn off of PlantNet and reached the realization that PlantNet is an educationally and botanically useless application. Harsh words, but I really could not, did not, and never will be able to follow up in PlantNet on my student's contributions and possible errors. 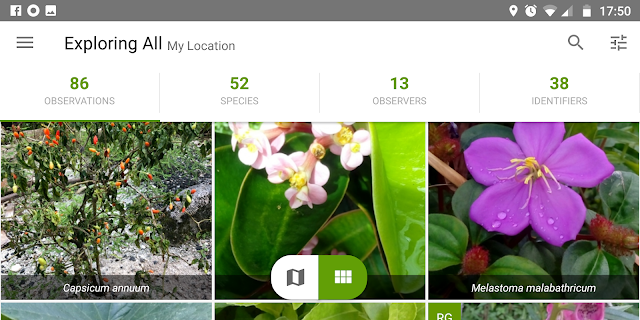 I do not dismiss PlantNet lightly, but a core difference means that iNaturalist is botanically usable while PlantNet is not, not as far as I can tell. PlantNet only permits a single image which must be a fruit, flower, leaf, or trunk. One cannot have a collection of images of a single organism collected together. Not as far as I could tell. There are so many other limitations to PlantNet - the lack of the ability to comment, to track suggested identifications, to geographically filter data - the list goes on. 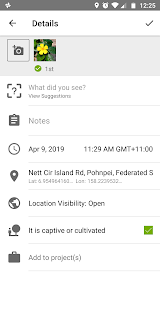 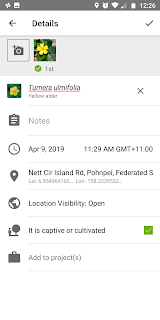 That said, by Tuesday I realized that my students were not properly logging iNaturalist images because I was unaware of many features of iNaturalist. My background in PlantNet caused me to leave the students with the impression that they should upload a single photo, when iNaturalist perhaps works best by uploading multiple images that include flowers, leaves, stems, trunks, and the whole organism. More egregious, I did not know about the captive/cultivated check box that would pull the students observations down to a "casual" status and thus not interfere with the wild plant research focus of iNaturalist. Fortunately I could do this post hoc. Bear in mind the majority of the plants photographed during the first class were captive/cultivated plants. 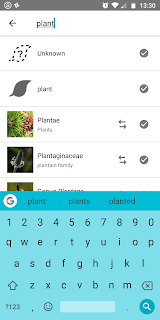 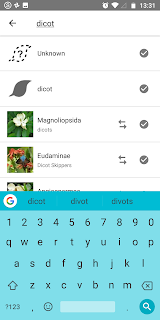 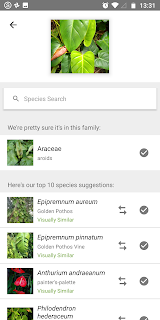 My students also were marking plants that they did not know as "Unknown organism." This again was my fault because PlantNet only permits a genus-species binomial as an identification and lacks the higher level identification options of iNaturalist. I did not know on Thursday that a plant can be identified at the plant kingdom level. Or the dicot/monocot level, family, or genus. That was all new to me. Thus on Tuesday I prepared and handed out a set of guidelines borrowed from the iNaturalist's teachers guide to iNaturalist. 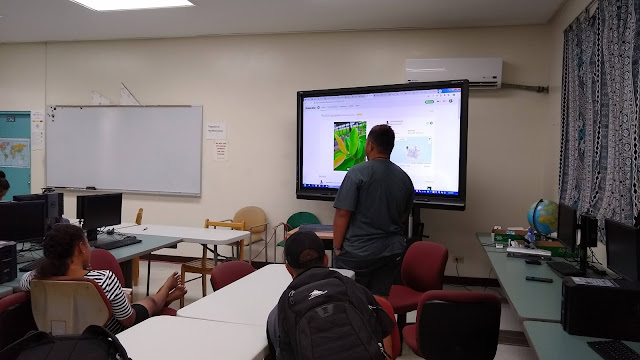 On Thursday the students shared their experiences with the apps. Those who used iNaturalist shared their observations using the SMARTboard because I pull those up with a Pohnpei bound box geofilter. I probably had other options such as following my students. I did not know that I could create a project and have the students log everything into the project, I am mulling over using that in the fall term with the project either being Pohnpei or ethnobotany-pohnpei or some such construct. Not sure what is the most right title, or whether the project should just be scss115ethnobotany - very specific. 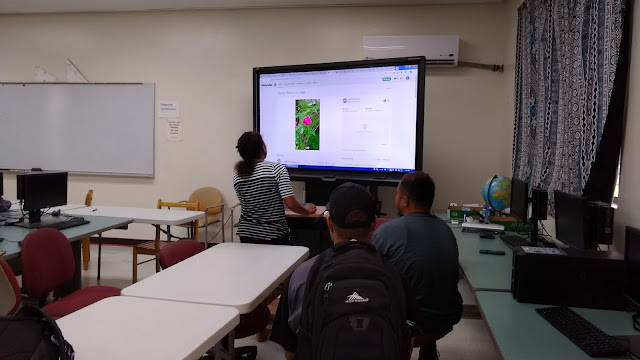 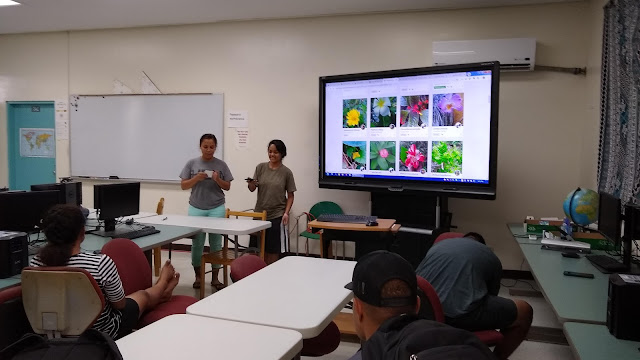 Merlynn and Diana have to use their phones to show the specimens in PlantNet. No, the lab does not have "casting" capabilities to the smartboard.

During the past week I would discover the joy "scrolling" iNaturalist using a geographic bounding box limited to Micronesia and turning off all filters so that even non-verifiable organisms would show. Then I scroll the list in grid form and identify those that I can. Very addictive. I would also join the iNaturalist forum and eventually progress to member status. iNaturalist has a wonderful, supportive, and active community. Not unlike Strava or Insight Timer, iNaturalist is another "focused" social interaction space where those with a shared common interest can interact. An article I once read suggested that this is the way out from under a social interaction cyberspace dominated by a single company (the FaceBook-Whatsapp-Instagram conglomeration).

I am now left mulling over how to best deploy and use iNaturalist in the fall term of the course. Changes I need to make include more supervised usage early on to ensure that captive/cultivated specimens are flagged from the get go. I suspect I will deploy a project to collect the student observations in a single place. I also need to emphasize that a student should not simply mark the plant as an unknown organism. The plant is, at the very least, a plant. And if a dicot/monocot/moss/gymnosperm/lycophyte/monilophyte distinction can be made, then that should be made. At the same time, students should feel free to leave a plant at a higher level and not feel pressured to take the plant to the species level if they are not confident as to the identification of the plant. I know I want to use iNaturalist from earlier in the term, and find ways that every student can participate. Much to think about.
education ethnobotany iNaturalist tech