Experimenting with the PlantNet and iNaturalist apps

April 04, 2019
The application of image recognition technologies as the back end to botany apps is providing increasingly relevant search results. Over the recent winter break I began looking at whether the apps now available might be useful to the ethnobotany class here on Pohnpei. Some apps had a more regional focus in the past and were better at north american or european plants. Pohnpei has a both unique indigenous plants and many introduced plants from around the world -  a challenging environment for any image recognition system. 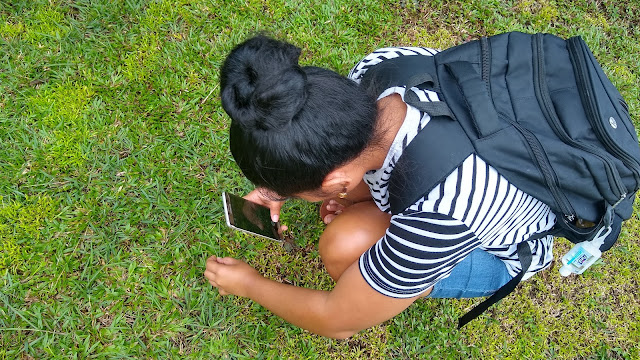 My criterion was that the app had to be appropriate for use in my classroom. The app could not contain advertising and the app had to be free, my students typically do not have the ability to pay for an app. The app would also have to be fairly small as my students often use phones with limited memory and processing power.

I settled on PlantNet and was impressed with the ability of the app to identify plants when given a sufficiently unique leaf or flower image. A week before the class in which I planned to introduce the app, the PlantNet app for Android updated, with the result that a number of my prior observations were now deemed to be "Invalid observations" although I could not determine why. 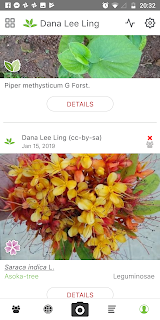 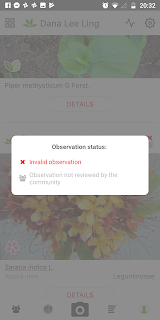 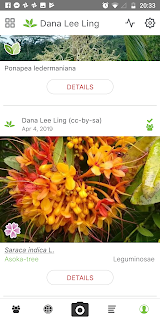 The app was still functioning well, and I did get an identification post-update to be deemed valid, the inconsistency bothered me. Over the next few days I looked for alternative options while continuing to explore the updated PlantNet app.

Literally a half an hour before the planned class I downloaded iNaturalist, an app backed by the California Academy of Sciences and National Geographic. PlantNet is backed by four academic institutions in France. I walked outside and took an image of Sphagneticola trilobata. 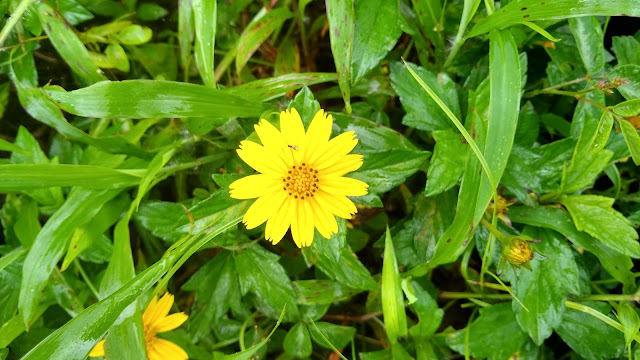 I fed the single image to iNaturalist and was surprised when the app returned Sphagneticola trilobata as the first suggestion. 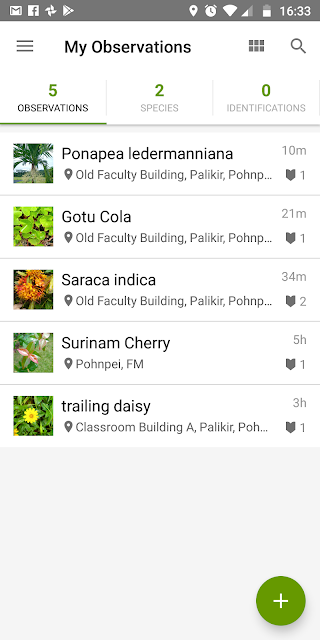 The app did not make the Ponapea ledermannia identification, I entered the binomial and found that the tree is in the iNaturalist database. Impressive.

I was then more surprised at the location labelling which appeared to be pulling locations from Google Maps database. The locations were spot on, including the labels. Then I stumbled into the map that showed the app had been used on Pohnpei as far back as 2012. And one could easily find the other identifications done using the app - something PlantNet appears to have no equivalent functionality. The app and associated website appeared to have far more interactivity than PlantNet, and had the bonus capability of being able to handle both flora and fauna. 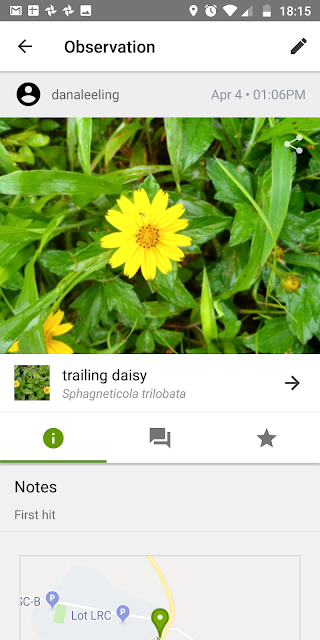 There are many more features available in an identification screen in iNaturalist. 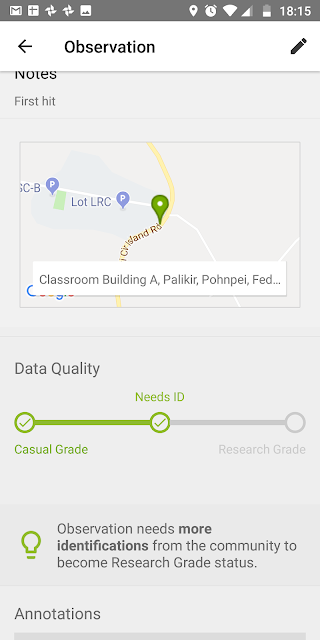 Thus in class I introduced both apps and invited the students to try either or both, up to them. I had the students work in groups where at least one person had personal mobile technology. We spent the first portion of the period downloading the apps and getting signed in. Some students had downloaded the PlantNet app earlier in the term as I had mentioned PlantNet early on in the term. We then went outside and began working on identifying plants. I told the students to experiment, see what they could identify. I provided little to no further structure, noting that the whole exercise was a curricular experiment. I went outside and began running the two apps against each other head-to-head using the campus WiFi for connectivity. 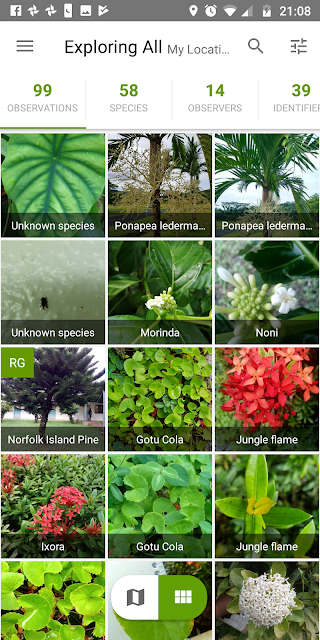 Identifications being made by my students around me in iNaturalist

As I worked with the class, I stumbled into the Explore section of the iNaturalist app and discovered that the app was showing me what my students around me were identifying - and misidentifying. And the comments feature allowed me to suggest the correct identification. The app was default set to show local area identifications. I was stunned - although the students were now scattered across campus, I could keep up with their identifications and provide helpful suggestions. 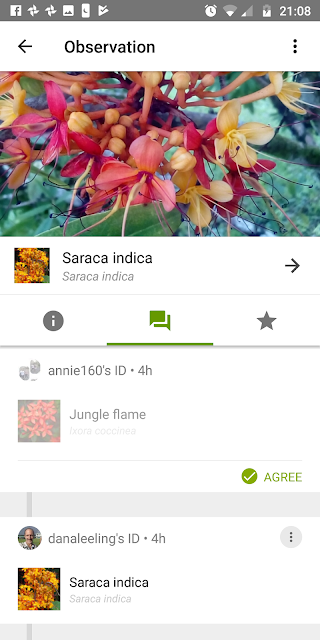 Meanwhile, in the head-to-head competition there was no clear winner. For some plants PlantNet provided the correct identification higher on the list. For other plants iNaturalist came out on top. Saraca indica was number one on PlantNet, but for one student iNaturalist did not return that plant in the top ten. iNaturalist, however, identified Centella asiatica from a shot of many leaves of the plant as the first hit.

And while I have not seen any reactions to my PlantNet identifications since I started using the app four months ago, this evening - four hours after the class - I am seeing iNaturalist community members chiming in and reviewing the students identifications, confirming those that are correct.

Although I have only been using iNaturalist for a few hours, the app appears to be more useful in a learning environment, especially in terms of interactivity and communication. PlantNet does not have a geographic image surfacing interface that iNaturalist has, so I have no way to see only those identifications happening around me by my students. With only a few hours of iNaturalist use under my belt, I am still at the moron level of usage, but iNaturalist will be the more powerful teaching tool going forward. And the ability to recognized flora and fauna, terrestrial and aquatic, is a powerful capability.

The students appeared to enjoy exploring with the app and spent the period imaging plants. The only issues encountered were occasional delays waiting for results and, for some students, their less capable phones were functionally slow when navigating between screens. The students, however, are accustomed to latency on the college network and are accustomed to their occasionally non-responsive phones.

I asked the students to spend the next week testing the app they chose to use and to report back to the class on their results a week from this class.

Late in the period, one student pointed their camera at another student and iNaturalist dutifully reported that the image was of Homo sapiens, human.
botany ethnobotany iNaturalist tech