April 11, 2019
This term featured a full week of class for this section, so I began with the MicSem video Power Comes in Many Forms on Monday. This would be an unusual term as I would start the video and then leave to attend a funeral in Paies for a college employee who had passed away during the weekend, Sinopia Samuel Alfons. 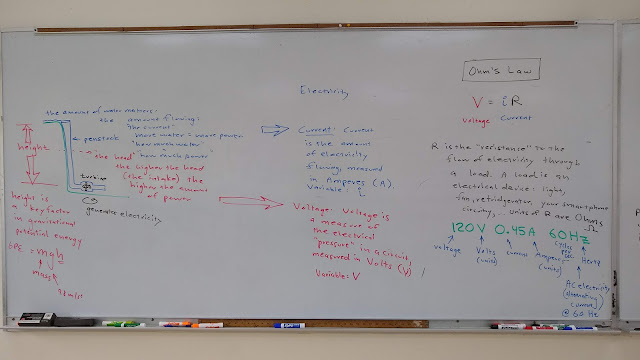 I led off from the end of the video on Monday covering the conceptual correspondence between head and voltage, flow and current between high head microhydroelectric projects and electricity. I gave definitions and then Ohm's law. 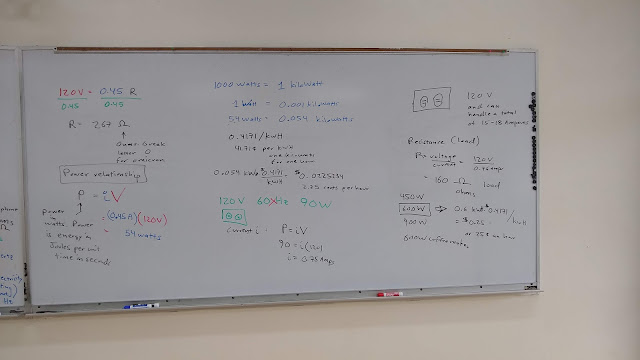 This segued into calculations of cost per hour based on the current rate of $0.4171 per KwH, which is down from last term's $0.44 per KwH. 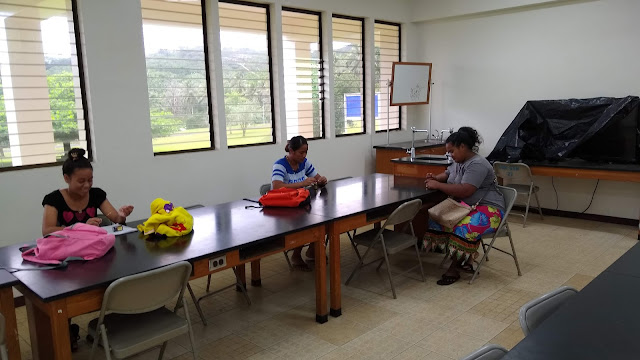 Lab on Thursday launched with only three in attendance at 8:00. More would arrive as the morning went on. I began by asking them to check to see if the bulbs and batteries were good. I was careful with my phrasing. I did not challenge them to light the bulb. I simply said, "Can you check to see if this bulb and battery are any good." This left the door open to the very real possibility that one or the other might not be good. 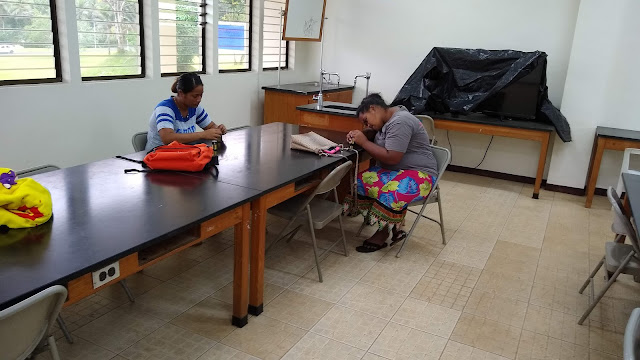 This also changed the dynamic in terms of solving the problem. This starts from the presumption that the students know how to check the system, rather than "Can you light the bulb?" which carries the implication that the students do not know how to light the bulb. Note that no student said, "But I do not know how to check the bulb and battery." Perhaps elsewhere that is likely to be a student response, but here that would be atypical for my students. 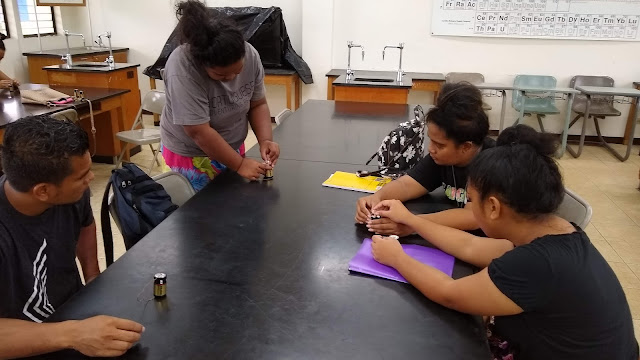 Jesse, Chastity, and Caslyn pick up directions from Junida. Junida had originally set up a short circuit, but eventually solved the puzzle and lit here bulb. Now she has moved to teaching the others what she has learned. Discovery learning leading to teaching. And I had done nothing. 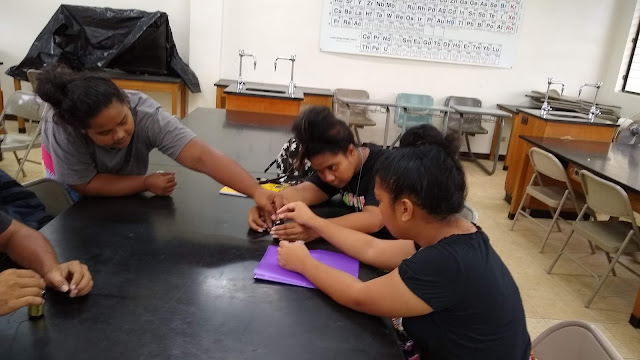 This term I dropped the conductivity table from the written report, and skimmed over that portion of the laboratory leaving the exploration an optional endeavor. I chose to focus more tightly on Ohm's law because I was still seeing students who were not understanding that the goal of laboratory eleven was the slopes of the lines which in turn were indices of reflection and refraction. So I knew I wanted to keep the focus shining tightly on whether current and voltage are linearly related and linearly related by the resistance as a coefficient of the current. 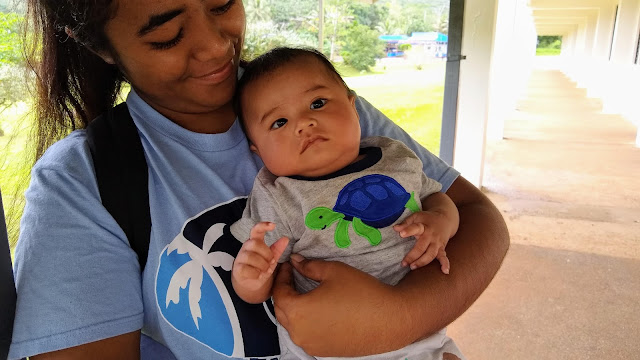 Sama, Nemely's baby, visited campus. He was in two of my classes prior to being born.

In the morning class the decade resistance box was set to 6 Ohms, in the 11:00 class both boxes were set to 9 Ohms. 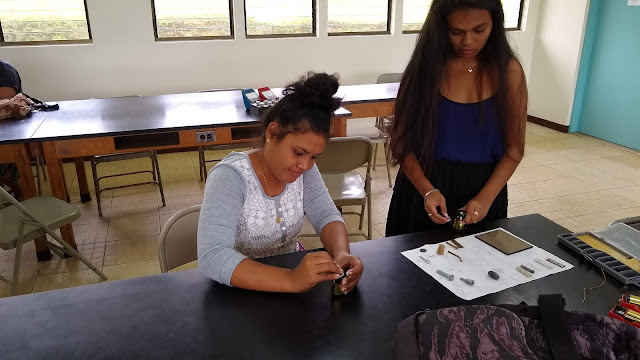 Patricia and Vivian work on checking batteries and bulbs 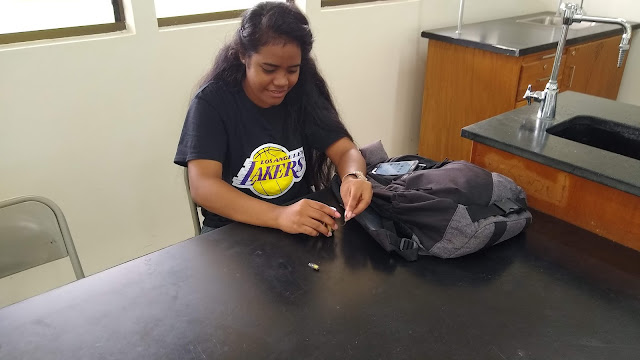 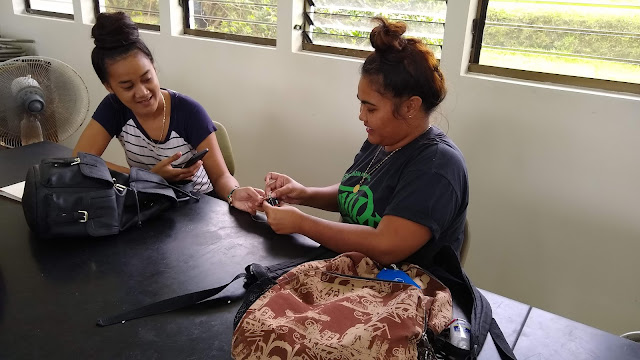 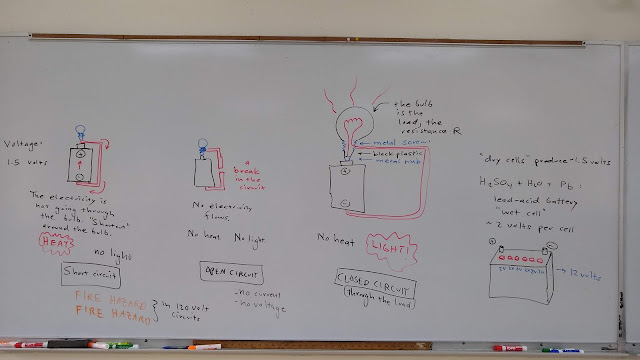 Board notes from the laboratory. 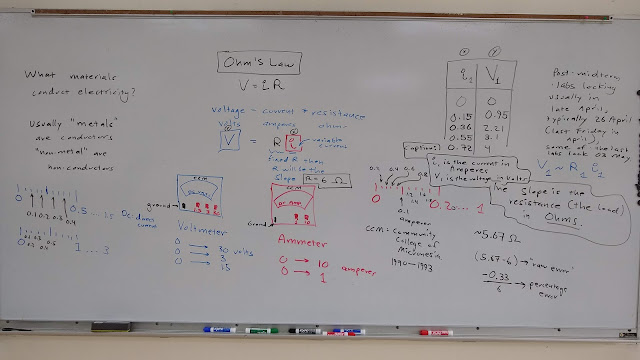