February 05, 2019
The day was dodgy in terms of the weather - patches of sun interrupted by brief passing light showers. Making a sun/rain call on the videos in A204 versus a walk in Paies was a toss-up. With Palikir in a patch of sun at 3:30, I went with the existing conditions and we walked up into Palikir. As usual on this walk I neglected to gather many photos. This particular walk has the track record of attracting rain, although the reality is that the closer one gets to the ridge, the higher the probability of encountering orographic precipitation. 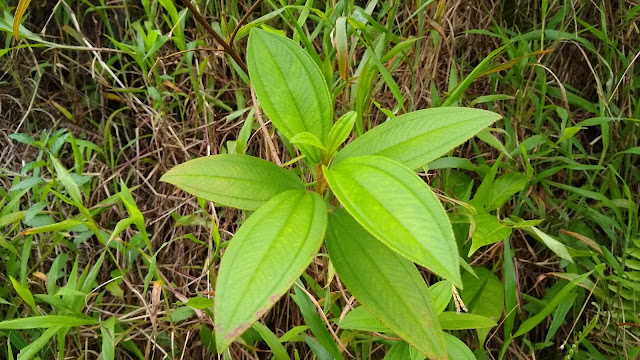 Prior to class I assembled a "Plants of Yap" photo collection from my trip there in January.  I also expanded the list of plant names for Yap by referring to Plants, people and ecology in Yap: Gidii nge gakiiy nu Wa'ab, Mark Merlin, Andrew Kugfas, Thomas Keene, and James Juvik. 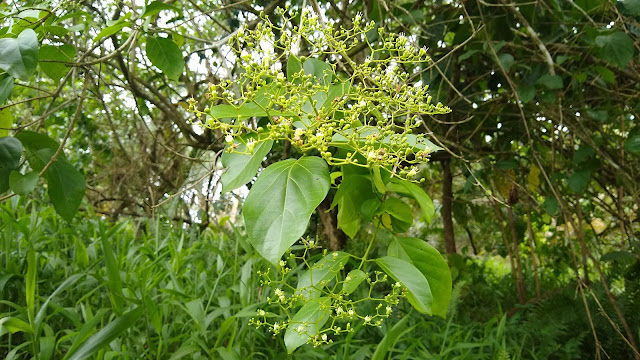 At the start of class I handed out a list of some of the plants we were likely to see on our Paies walk. 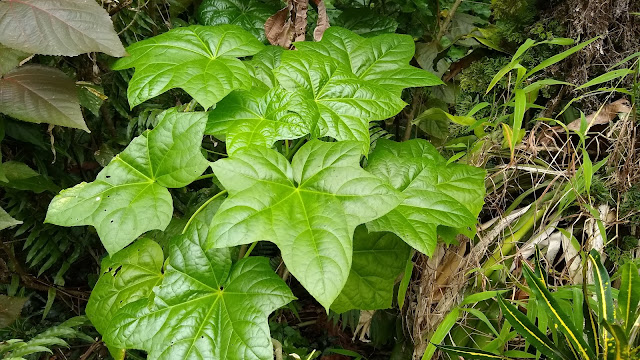 I began at the oahr - Premna serratifolia - and then moved on towards the Premna obtusifolia and Glochidion ramiflorum. I could see what appeared to be the potential development of another rain wave on the ridge and opted to head into Paies, waving my arm in the direction of the Volkameria inermis, Ocimum tenuiflorum, and Scaevola taccada. After a stop at the Plectranthus scutellaroides, the Casuarina equisetifolia (nach in Yap), and a Cordyline fruticosa variety by Jed's station, we headed over the hump in the road into Paies proper. On the way I detailed my use of Piper ponapense to staunch the bleeding of a cut on my finger on Friday night. 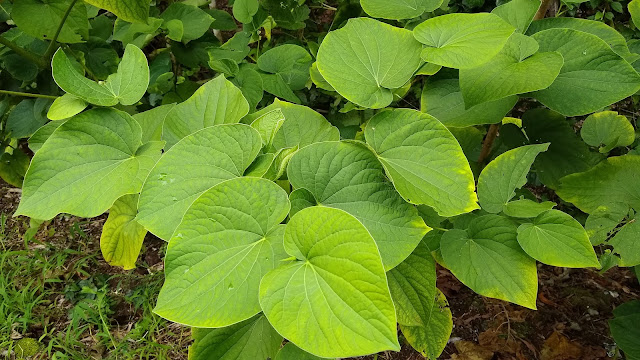 I noted that Piper methysticum leaves have the same property. On the way over the hump I covered the difference between Clidemia hirta and Melastoma malabathricum. I had just learned that M. malabathricum is known as ramluw ni ted in Yap, or possibly in some locales as churgur. The walk as currently constructed does not include Centella asiatica, Cymbopogon citratus, nor Ipomoea littoralis as these would require a westward walk.

There is still structural value in the walk into Paies, to demonstrate that homes are surrounded by medicinal plants. And that post 2023 the pharmacy is potentially whatever is outside your door.

I did not see the Curcuma longa, but then that plant is dormant at this time of year (based on my observations at home). I also did not come across Peperomia pellucida, that would be a nice find.

As ever, rain hit this walk, this year at the Ifamilik family home. I headed up to the junction where a cook house roof was available for a short lecture on the point of the walk. That worked well, giving the class a chance to circle up. At that point I did not see the need to continue up the road and dismissed from there.
ethnobotany