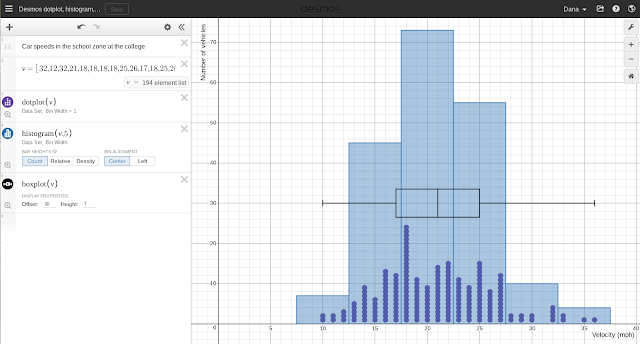 Data can be copied and pasted from a spreadsheet, just remember to copy only the number data and to not include the column label in the copy selection. As a real plus, the three plots can be displayed on the same chart showing the students the relationship between the data, the histogram, and the boxplot. This overlay capability of different chart types is generally not possible with spreadsheet charts. 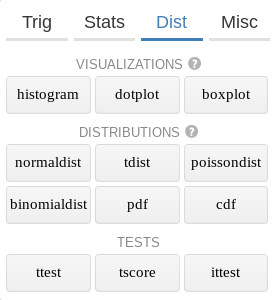 All of these new functions can either be entered directly by typing the function name or from the new Distribution tab of the functions menu. All of the powerful capabilities such as sliders and their associated animations can be deployed, thus the impact of the class width can be dynamically demonstrated.

Desmos has followed the terminology used in Excel and has referred to the class width as the bin width. Google sheets refers to this metric as the bucket size. Some texts use the terminology interval width.

Note that the boxplots do not display outliers, which will limit their usefulness for now in a statistics course. That said, the capabilities take Desmos into new territory. Excel cannot produce any of these charts directly. Google sheets can produce histograms but not dotplots and can no longer produce boxplots (a Statistics add-on once provided boxplot capability, but that add-on has been removed by Google).

Based on the average and standard deviation, 87% of the cars exceed the school zone speed limit

Desmos has produced video introducing these new statistical features. Desmos brings very powerful visualization capabilities including animations to distributions and areas under a distribution curve. My students always had difficulty understanding what the result of a normdist function in a spreadsheet meant, Desmos makes that result very visual. Note that the normal distribution function in Desmos is normaldist, a break from mirroring function names used in spreadsheets. And where spreadsheet functions can only return the area to the left of a value, Desmos can return the area to the left, right, or between two values graphically. 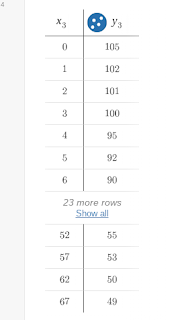 One other feature that slipped into Desmos at some point is the automatic hiding of data rows in tables that would exceed the screen height. This feature makes working with larger data sets much more manageable, especially when there are multiple such tables in a single Desmos chart file.
Desmos education statistics tech