December 13, 2018
MS 150 Statistics is an introductory statistics course with a focus on statistical operations and methods. The course is guided by the 2007 Guidelines for Assessment and Instruction in Statistics Education (GAISE), the spring 2016 draft GAISE update, and the ongoing effort at the college to incorporate authentic assessment in courses. A history of the evolution open data open data exploration exercises and associated presentations as authentic assessment in the course was covered in a May 2017 report. 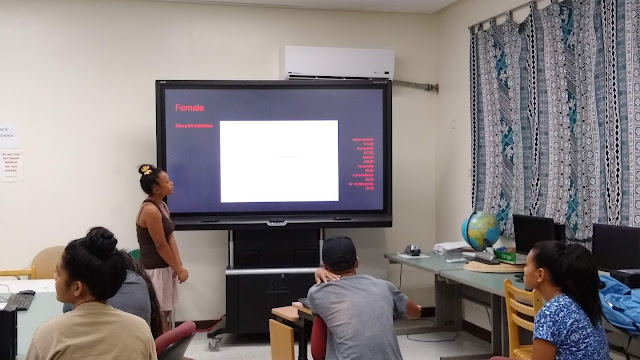 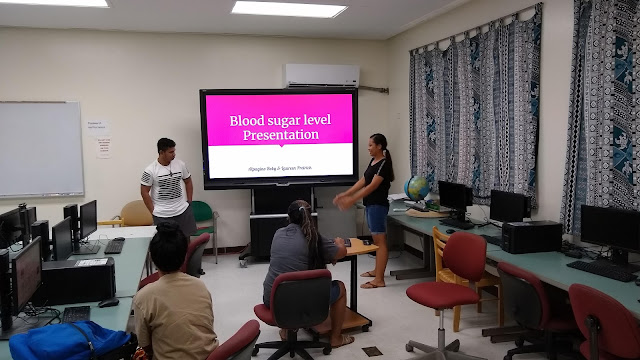 Gino and Laureen present. During the term the students engaged in seven data analysis presentations


The course wrapped up coverage of content three weeks prior to the end of the term. The students then engaged in a series of three data analysis, exploration, and presentation exercises. The course then ended with a final examination which was completed as an online test inside Schoology. This term the spring 2018 final examination was posted as a practice test. 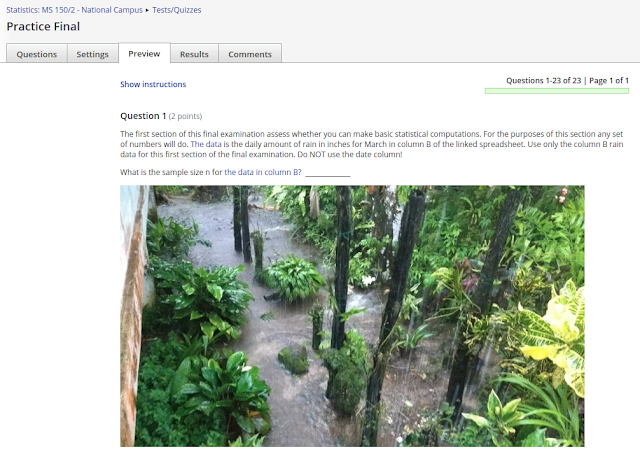 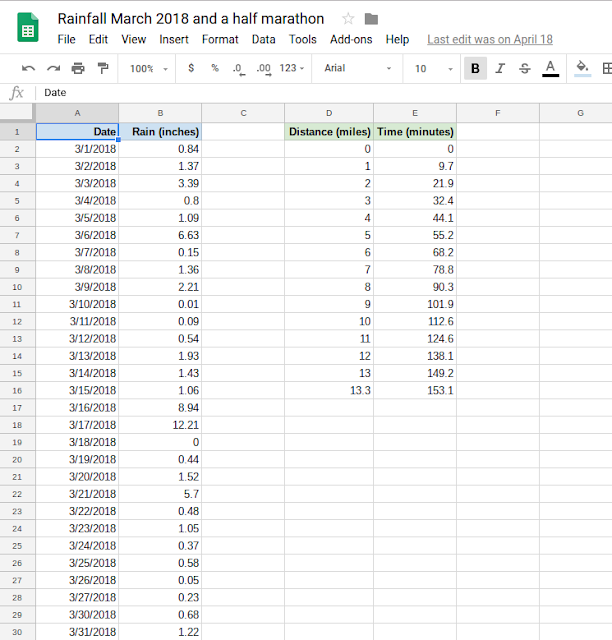 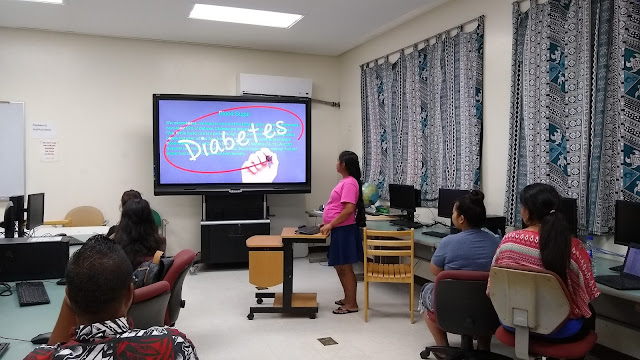 Students evidenced strength in calculating basic statistics of both one and two variables.

Performance of inferential calculations for both one and two variables has remained weaker. The existence of a practice test does not appear to have a marked impact versus prior terms and did not positively impact the calculation of the lower and upper bounds for a 95% confidence interval. Again this term, as in fall 2017 and spring 2018, students were hung up on the use of plus or minus two standard errors as an approximation of the 95% confidence interval. This is used to introduce t-critical values. The solution would seem to be to omit all mention of plus and minus two standard errors and move from material in chapter eight directly to chapter 9.2 omitting section 9.12. That said, explaining the sudden appearance of Student's t-critical is more challenging. "Plus and minus two" is introduced conceptually in chapter 2.4 with unusual z-scores. Finding a way to segue directly from distributions of the mean and the standard error to confidence intervals remains a necessary curriculum modification at this point.


The MS 150 Statistics course fall 2018 consisted of two sections, a total of 58 students enrolled as of term end, 22 females and 18 males. The two sections are kept in curricular synchronization during the term. Both sections covered the same material, worked the same assignments, and gave presentations on the same topics. The sections met at 8:00 and 9:00 on a Monday-Wednesday-Friday schedule. 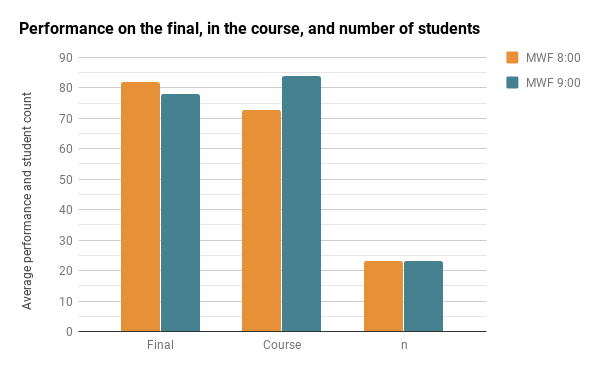 The course permits late arriving students to enter the class whenever they arrive. That the two sections performed equivalently suggests support for this approach in an 8:00 section. 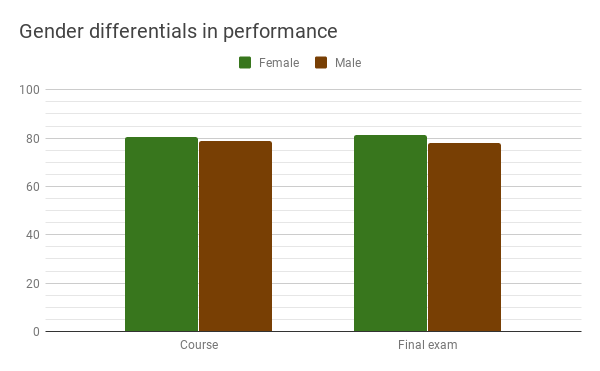 1.0 Perform basic statistical calculations for a single variable up to and including graphical analysis, confidence intervals, hypothesis testing against an expected value, and testing two samples for a difference of means.
2.0 Perform basic statistical calculations for paired correlated variables.
3.3 Draw conclusions based on statistical analyses and tests, obtain answers to questions about the data, supported by appropriate statistics 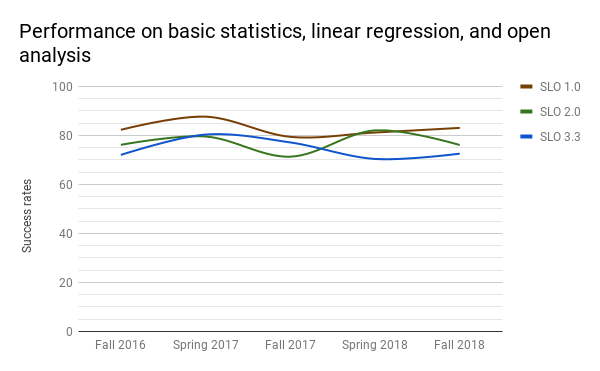 Final examination performance on the first course learning outcome, 1.0 basic statistics, has been known to be generally stable around 80% since fall 2012. A success rate of 83.1% for fall 2018 is on par for this particular outcome. The average on the final for questions in this area was 84.8%, in good agreement with the 83.1% result from the student learning outcome data reported by Schoology. Note that the Schoology result is an aggregation of performances on 26 assignments during the term. The agreement with the final examination performance on items serving learning outcome 1.0 is remarkable.

Performance on outcome 3.3 averages 75% and this term's 73% average success rate across seven assignments during the course is in line with that longer term average. This learning is not tested on the final examination.

As an educator, I am aware that there is a penchant in education for "continuous improvement." The reality is that there is far more inertia in a value than I suspect those in education comprehend. These success rates tend to be stable over long periods of time and reflect both the difficulty of the material as well as the many reasons students do not succeed on the material. For every student who did not do well, there is a complex back story. Data for success on the final examination demonstrates this longer term stability and the tendency to return to the long term average. 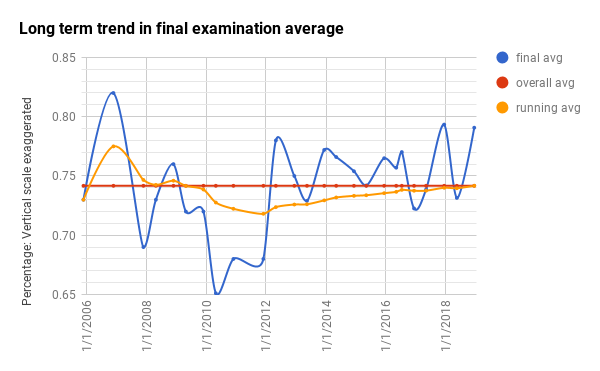 Long term lack of a trend in final examination averages Fall 2005 - Fall 2018:
y-axis does not start at zero nor end at 100! vertical range is exaggerated!

Since 2012 the final examination percent has moved in a narrow range of plus or minus five percent from 74%. Fall 2017 was slightly up at 79.3%, but this was projected last fall to be a random aberration. Just as there was a multi-term slump in the averages from Fall 2009 to Fall 2011, so can there be multi-term improvements that do not hold over the longer haul. Spring 2018 saw performance return to towards the mean as as had been projected the previous fall. 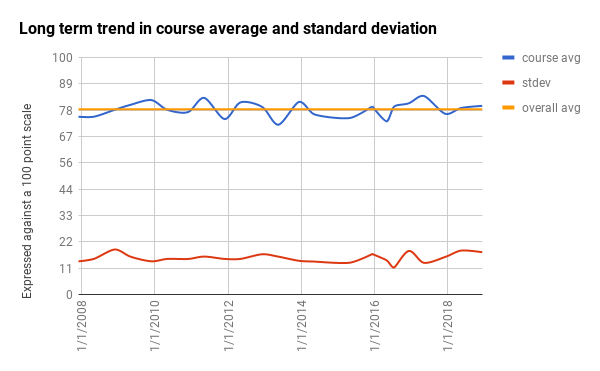 
The standard deviation of the students' individual course averages is also relatively stable around 15% with a slight rise to 18.5% seen spring 2018.