The seventeen students (11 female, 6 male) who completed the course engaged in a number of activities in support of this learning outcome. Reproductive strategies were also communicated via student presentations. Morphology was supported by a vegetative and floral morphology walk along with a fruit type identification exercise. Identification of local plants permeated every outing, field trip, and hike. 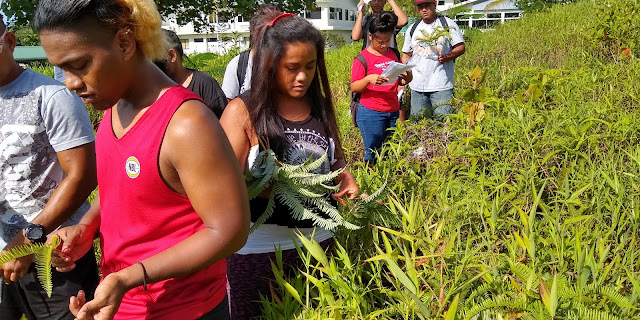 Via-marie demonstrated a prime use of Dicranopteris linearis - as a sun hat. On the left Justin examines the binary bifurcations that are the naming characteristic of Dicranopteris.

All seventeen students attended the field final examination exercise. This is actually unusual, in recent terms there have been one or two students who were still registered in the course but no longer attending the class by term end.

The final examination involved a walk on campus and required the students to identify twenty-two local plants. The students had to identify the plants by Latin binomial, local name, and provide a specific cultural use for the plant. The students had a list of 83 Latin binomials for plants found on and around the Paies, Palikir, campus to assist with the Latin name identification. An online flora for the campus was also available. 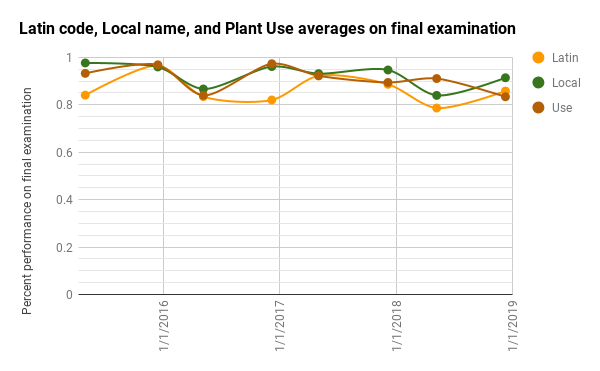 Performance on Latin name, local name, and local use sections of the final exam

Collectively, the 17 students who took the field final examination made 321 correct Latin binomial identifications out of 374 possible identifications for a 86% success rate, a return towards a longer term average over the weaker performance of spring 2018. To assist with learning the Latin names, online plant identification practice exercises were available, but only seven students took advantage of these online exercises. 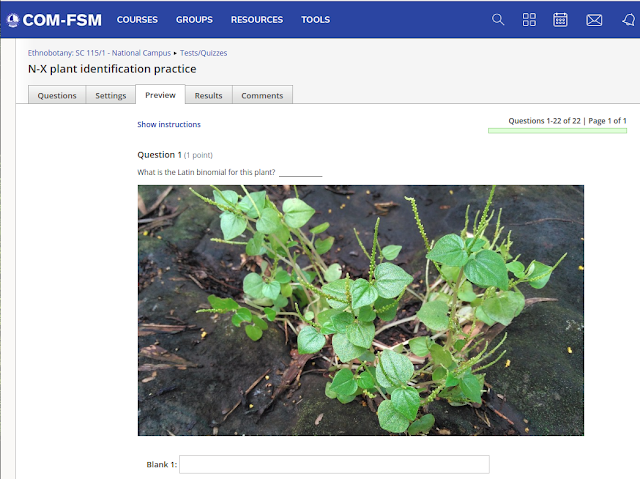 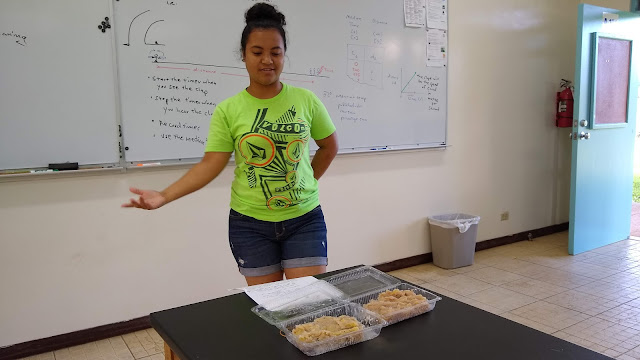 Students engaged in presentations on healing plants, plants as food, plants used for material culture, and wrote two essays during the course of the term on the cultural use of plants.

For the twenty plants on the final examination, the 17 students were collectively able to cite 312 uses out of 374 possible uses, a success rate of 83%. This was down slightly against past performance. 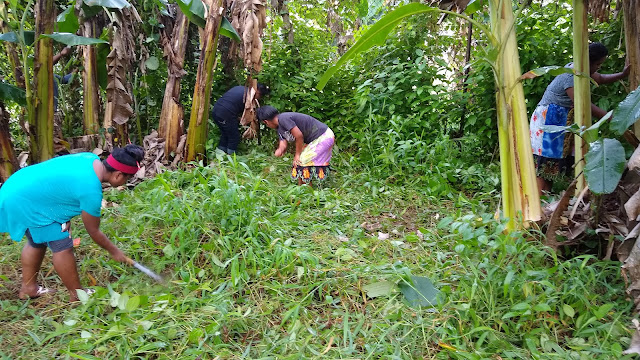 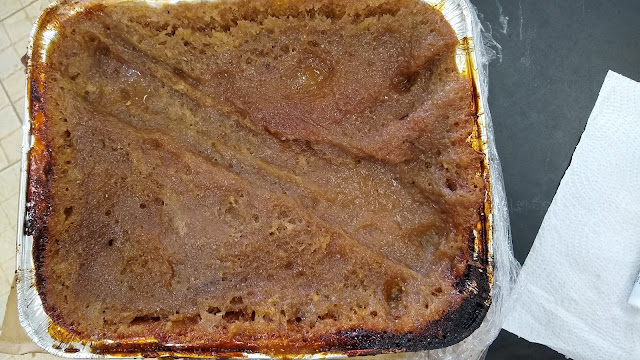 Mwoakillese pilolo brought in as part of a presentation on local foods. 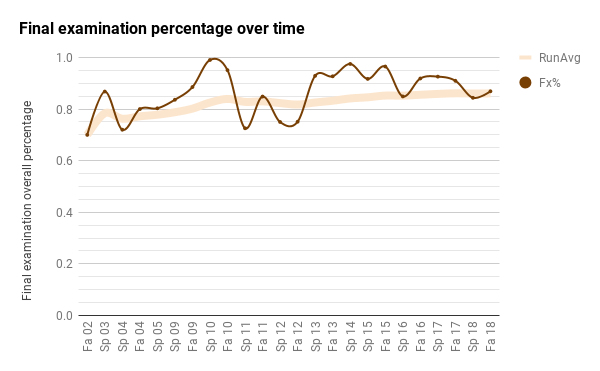 From 2002 to 2005 the course had a course content oriented final examination. From 2005 to 2008 the course ended with a final essay examination (not included above). As noted above, spring term 2009 the course shifted to using the present format of naming plants and explaining their uses in a field final practical examination.

In the spring 2009 final there were twelve plants on the final and a list of only 20 Latin binomials. By the spring of 2010 the number of plants to be identified increased to 16 plants of a possible 26 plants on the Latin name list. The averages seen in the spring and fall of 2010 are in part a function of the ethnobotanical garden having been a small collection of 26 plants in one corner of the campus at this time. The list of plants for students to know has grown to 83 since then.

Part of the increase in the number of plants is due to the intentional evolution of the campus and environs as a living herbarium.

Course student learning outcome achievement were mapped to activities, presentations, hikes, and assignments in Schoology Institutional during the term. 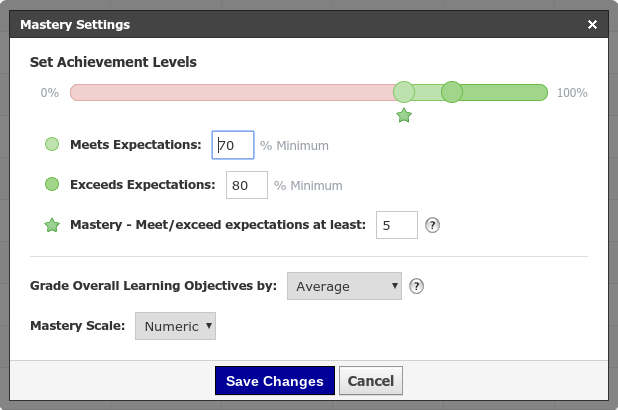 Mastery settings were set at 70% with at least five demonstrations of the outcome at that level or higher.

Course student learning outcome performance by student, each row is a student

CLO 1: Identify local plants, their reproductive strategies, and morphology.
All seventeen students  demonstrated this outcome at least five times during the term. One student had an overall average below 70% but demonstrated the outcome above the 70% level five times.

CLO 3: Demonstrate basic field work competencies related to management of culturally useful plant resources and foods.*
Fifteen of seventeen students demonstrated this outcome at least five times during the term. Two student shad an overall average below 70% but demonstrated the outcome above the 70% level five times.  The two students who failed to demonstrate this learning outcome were also below a 70% average.

*Note that the current course outline dates to circa 2007. In 2011 the college undertook reformatting all outlines at the college, but instructors were instructed to not change content at that time. That meant that the outline approved in 2012 was still the outline designed in 2007. In the wake of a decision to include the course as a required course in the two-year Agriculture and Natural Resources program (ANR), a revised outline was prepared and submitted after 2012. As the outline document saw changes in the format specifications, the outline was appropriately modified. The reformatted outline was again submitted for consideration in the fall of 2016. As of fall 2018 the proposed outline has yet to be considered by the appropriate bodies. There has no been no change in the core student learning outcomes, the change is rather an addition of outcome number three in light of the inclusion of the course in the ANR requirements.

In the past the final examination has ended at the FSM-China Friendship Center. This term the final ended at maintenance, which proved sub-optimal as there was nowhere for the students to sit and rewrite their papers. Most of the students were left at a single table, others were scattered around on random surfaces. This was a one-off experiment which had the nice touch of making Piper methysticum the final plant on the examination. The loss of writing space, however, proved  problematic.

The final examination spring 2018 had twenty plants for sixty answers (Latin name, local name, use) and was entered as 60 possible points. Fall 2018 the final examination had sixty-six answers. Note that for plants that do not exist on the island of a student, the student gets credit for simply noting that the plant does not have name in their language. The use can be from anywhere in Micronesia. The plant list was designed with the mix of islands present in the class in mind. Noting some common wrong answers permitted me to deduce that the answers were not necessarily all independently arrived at, thus, as has been done in some prior terms, I divided the final score by three, rounded the result to a whole number, and entered the final examination as being out of 22 points - one point per plant. The course finished with 351 points, which means the final examination was worth only 6.3%. This is reasonable given that the course is intended as a experiential course, a journey of self-discovery for each student of their plants and the uses of their plants.
assessment ethnobotany