November 13, 2018
This term fruit morphology fell on a Tuesday behind a three day weekend, a Tuesday which was the first class in a week due to a different holiday on the prior Thursday. I knew most students would forget to bring a fruit and that absenteeism would be high. Both predictions held, with some students bringing no fruit, one digging a betelnut out of their pocket (ruled inedible because if you actually eat the nut stomach acid destroys the active ingredient arecoline). 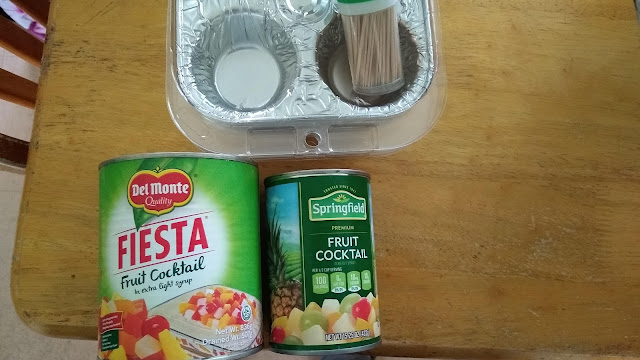 A workshop in the morning and the irregularity of fruit in the markets and stores meant falling back on something fairly easy - low hanging fruit. Although clearly suboptimal, curriculum is sometimes driven by what one has at hand, not what one wants to have. Perhaps part of the thrill of teaching is having a half-unbaked idea and then taking into a classroom to see if learning will be engendered. The best plan cannot predict actual impact. 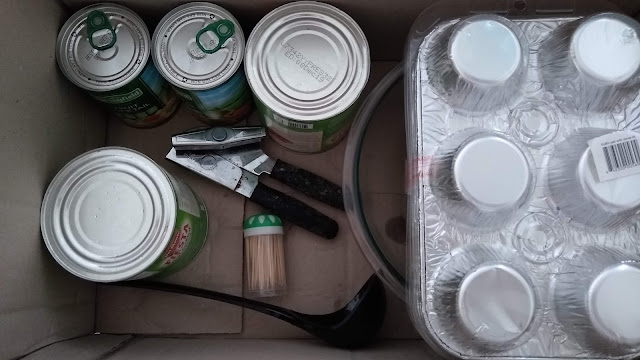 Plus a can opener, a mixing bowl, and ladle

With seventeen students I sought small cups that I could use, but, again, you use what you have, not what you want. Thus I wound up with three cupcake baking tins that each would have held six cupcakes. They were the right size, but joined together. I planned to cut them apart, but ran out of time. This would prove very serendipitous. The three cupcake tins generated three groups which gathered around each one of the three cupcake baking trays. And thus the individual activity redesigned itself into a group activity. Which worked better. 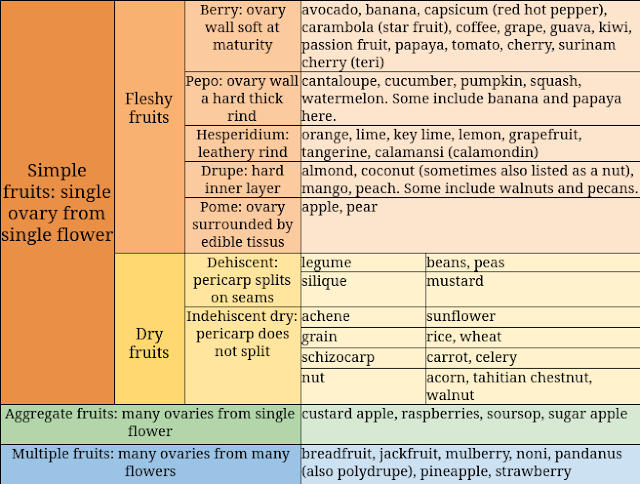 The students were supplied with a modified form of a botanic fruit key and were tasked with identifying the fruit, fruit type, and local name (if any). 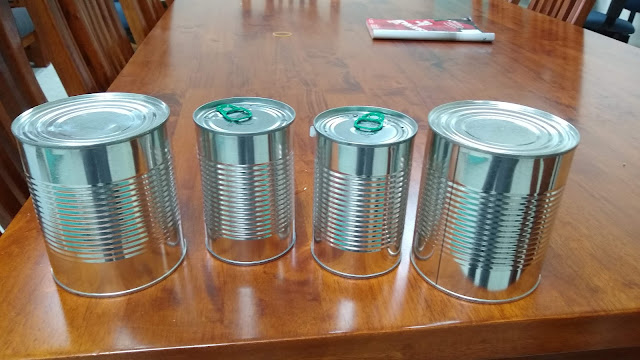 To prevent using the labels, they were removed. This was apparently an idea I had early in life when I carefully removed all of the labels from the cans of food stored in a cabinet that I could reach as a toddler. For a number of days family dinner included a surprise food from an unmarked can in the house. Only two cans were needed in the class, one of the medium size cans and one of the small cans, there was actually a small amount left over. All 18 cupcake holes were filled. Had I used all four cans 36 to 42 cupcake cups could have been filled. 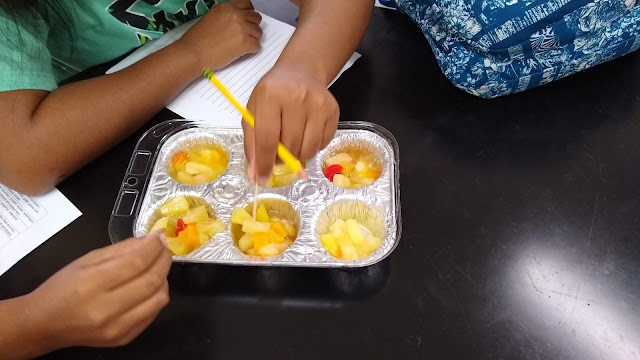 Toothpicks were provided to retrieve fruit

A handout also provided space for classifying what fruit was brought into the class, and some of the students did bring fruit. Attendance was at 70%, 30% absent. Of those who came to class, better than half did bring a fruit. Carambola, apple (apel en wai), dois mango, guava, and a lime were among the fruits brought in. 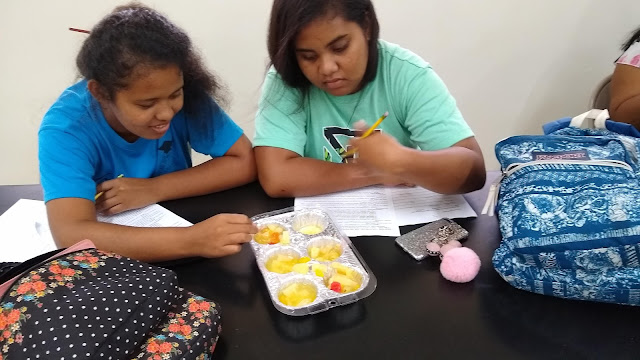 These two worked on their own tray sorting through the fruit. One of the challenges was noted by a student who said, "All of these taste like pineapple because they were all in the can together." The pear pieces could only be recognized by their texture, which is not a familiar texture here in Micronesia. I have not seen pears in the stores here. There were students who, despite the challenge of the task, correctly identified the pear and peach pieces. I myself get confused by peaches and apricots. 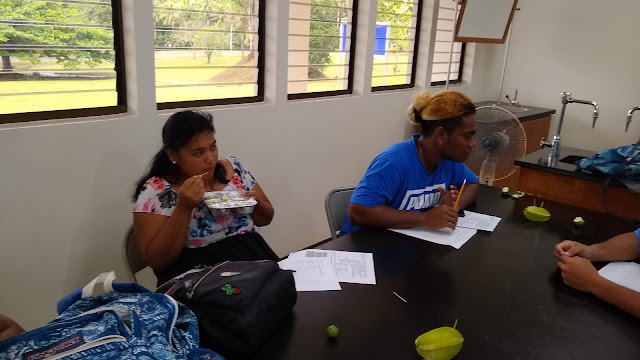 The toothpicks would also prove a valuable choice - toothpicks slowed down the rate at which the fruit disappeared. The students were hungry, the toothpicks meant only being able to eat one at a time.

The nata de coco proved a stumbling block for the students - though some had had fruit cocktail, they thought the nata de coco was some form of "Jello." I pointed out that the little cubes were too tough for gelatin, but I could sense that the students did not have a lot of experience with gelatin. The story of nata de coco is a story of humankind's willingness to put just about anything in their mouth in the quest for food sources. A 1999 National Academy of Science and Technology, Philippines, booklet tells the remarkable story of nata de coco. Emphasis added by this author.

"Nata production dates back to the 18th century. The town of Pagsanjan in the province of Laguna was known for its piña cloth. This material is made by weaving together the fine fibers extracted from pineapple leaves, hence its name. Piña cloth is used for making barong tagalog shirts and dresses and is the most expensive fabric used for this purpose. Part of the process of making piña cloth is bleaching the material. In the 18th century, the bleach used was the acidic juice extracted from the parings of the pineapple fruit. The story goes that when some of the juice was left to rot, growth of a slimy substance on its surface was observed. Someone must have tasted it and found it good. Thus began the nata de piña industry.

"This product became quite popular as a sweet delicacy. However, due to the seasonality of pineapple, its production could not be sustained year round. There was a need for a more regularly available medium. In 1949, T.K. Africa, a chemist working for the National Coconut Corporation, published an article describing the use of coconut water as an alternative medium for nata.

"In 1954, the Philippine Coconut Authority opened a branch in Alaminos, Laguna... The early nata producers used large, wide mouthed glass jars as containers for the medium. The solution was allowed to stand for about 14 days - the length of time it would take for the nata to reach the desired consistency. By then, it would be very thick, almost half the height of the liquid in the jar. The reason it took so long for the nata to form properly was that the sugar content was too low and the acid concentration in the water not high enough. By the mid 1970's, research by food microbiologists led by Priscilla Sanchez showed the optimum conditions for nata formation. Coconut milk (extracted from grated coconut meat) and water were a better medium when combined with glacial acetic acid and sugar."

Thus someone's willingness to fish some slime out of an acidic waste pool and then eat that slime led to the dining pleasure that is nata (latin root: swimming) de coco. Amazing.
botany ethnobotany