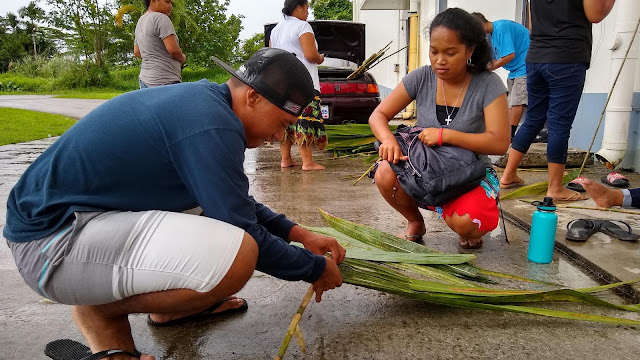 Salvin and Bredalynn working together on a piece

On Pohnpei, in the past, the tip of a marlin (a bill fish) was used as a needle. Nowadays the sharpened end of a toothbrush with a hole in the end is a good needle, nails are also sometimes used. Nails with heads, however, do more damage to the frondlet due to their heads. The class often uses needles carved from bamboo. 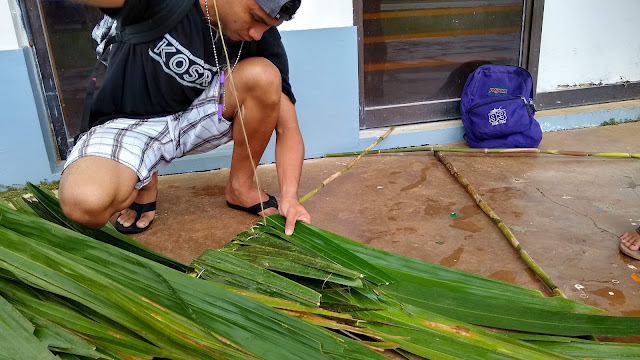 Expert craftsmanship and skill shows in the even spacing of stitches and the tightness of weave. String is not typically used to stitch the thatch together. Some use the outer skin of the main petiole on oahs. Others unravel rice sacks of woven plastic. On Yap the outer skin of a banana is also used for stitching. 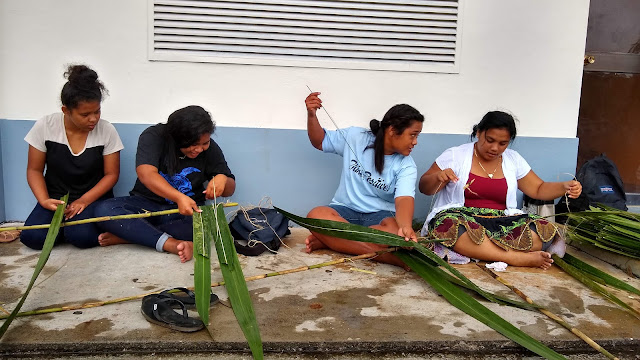 Frondlets are folded so as to create a one-third, two-thirds split in relation to the length of the frondlet. The base is one-third, the apical end is two-thirds. The minor rafters over which the frondlets are folded are made of either Phragmites karka (Chuuk: Woowo, niwo, Kosraen: loa, Pohnpeian: lirau) or Saccharum spontaneum (Kosraen: ac, Pohnpeian: ahlek). The minor rafters are called rahu in Pohnpeian. In the class activity ahlek is often used. 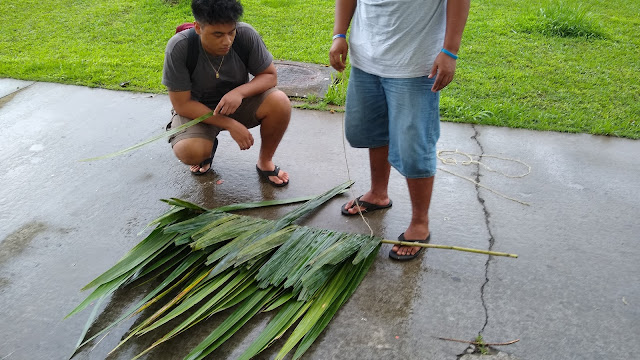 Thatch done by Michsane (on the right), Keanu looks on from the left

Nipa is too narrow to produce proper doakoahs en Pohnpei. Doakoahs en Pohnpei differs in being laid on a 45 degree diagonal. Note that traditionally Pohnpeian thatch was not covered by a net to protect the roof from wind damage. 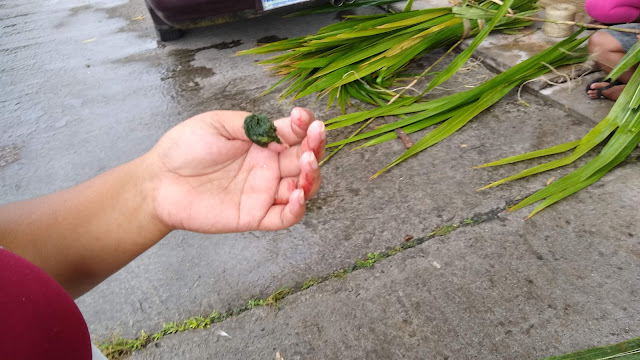 A student and I separately managed to cut ourselves. Piper ponapense was nearby.

On the flat, outer island atolls in mid-ocean the wind is a more significant source of damage. On Pohnpei rain and subsequent thatch rot are apparently more problematic. Pohnpei thatch is not netted down. The thatch is designed to catch the wind and "fluff" slightly, aiding in drying of the thatch and slowing rot. 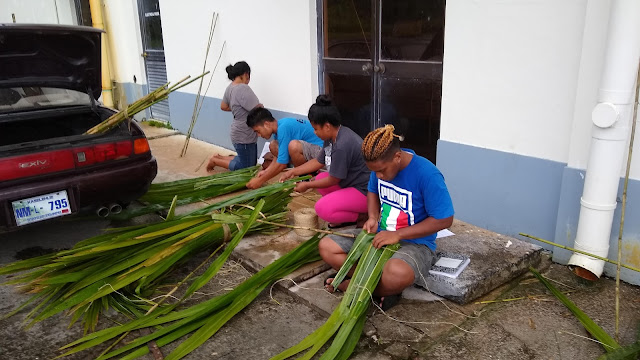 The nohk is the back half of the midrib. Removing the nohk is necessary when using oahs due to the thick midrib. The oahs frondlet cracks and breaks unless this is done. This is not apparently strictly necessary with parem. The nohk from oahs are then used to make a whisk broom. Teeth are used to crack the midrib and split the nohk. The nohk can also be removed from nipa, but with more difficulty and a smaller resulting nohk. 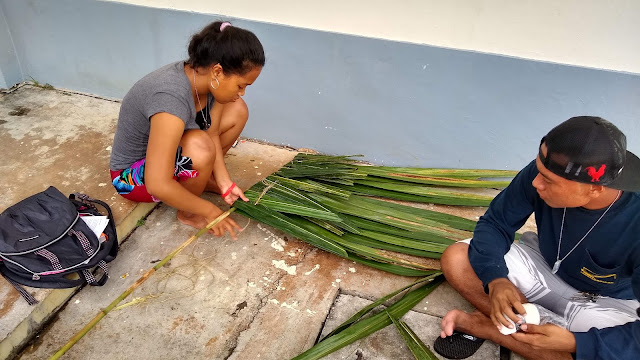 Kosrae does not have oahs. Kosrae is presently thought to have only four species of palms. Coconut (Cocos nucifera), betel nut (Areca catechu), Ponapea ledermanianna (Kosrae: kitacr, Pohnpei: kedei) , and Nypa fruticans. On Kosrae Nypa fruticans is used for thatch (Kosrae: fahsuc, Pohnpei: parem). Fahsuc is narrower than oahs. Thatching frondlets are laid down in pairs and folded at the midpoint. 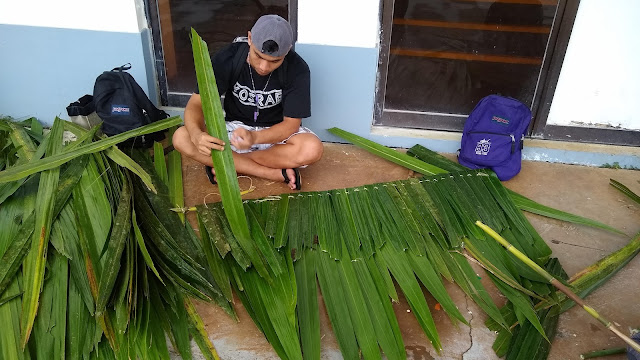 AB finishes up his piece of thatch 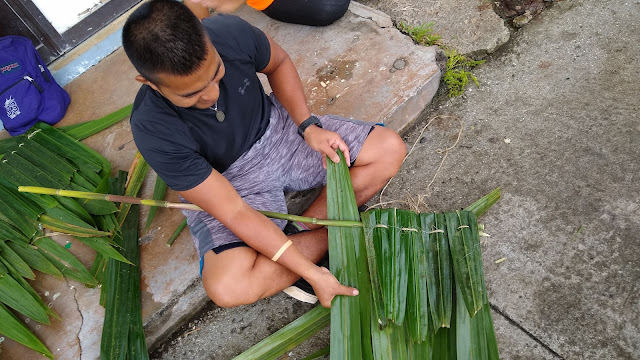 Venister works on his thatch

Linguistic note: dok is "pierce" while oahs refers to Metroxylon amicarum. The combining of the words is what is known in linguistics as verb noun incorporation or incorporated objects. When the word is by itself, it is dok (intransitive), which means to pierce or to stab. The transitive form of it on the other hand is doakoa. The use of /oa/ is sometimes /o/, depending on the following vowel or consonant sounds. For instance, doakoahs, to pierce oahs, dokpwihk, literally to stab a pig (to pig-slaughter), dokomwomw, to spearfish,etc. [Source: Robert Andreas] 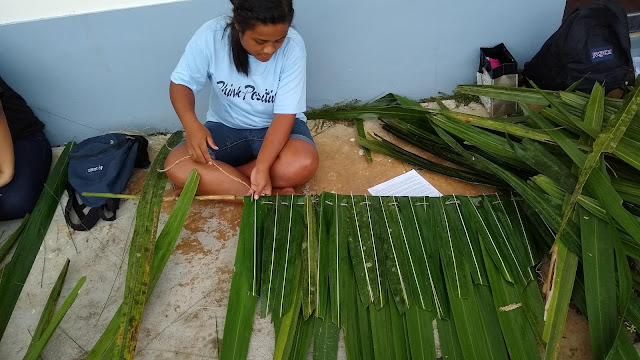 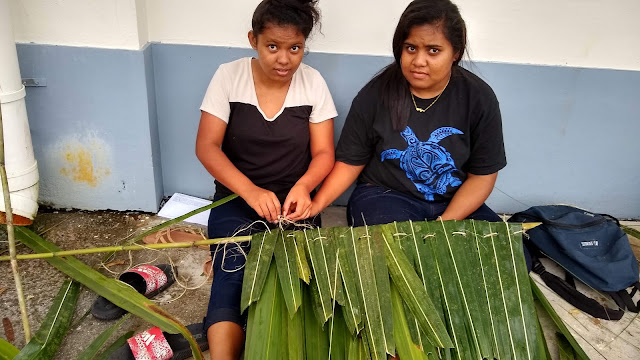 Kimberly and Enyd display their thatch 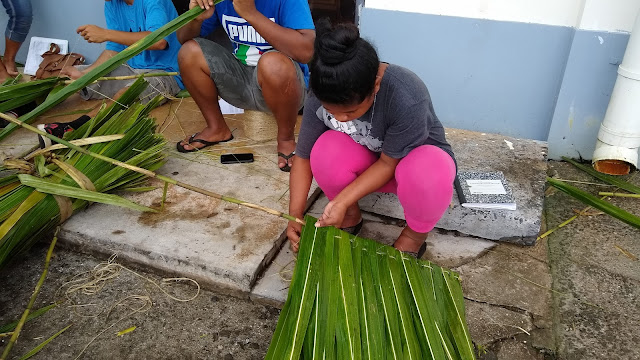