Beginnings with the density of soap

January 17, 2019
Beginnings are perhaps the single most important moment in a relationship. The complication with starting off day one with a community building exercise in a collegiate class - unlike the scenes shown in movies - is add/drop. For the first three days the class role is an unstable and shifting field of play, with students appearing on and disappearing from the role. Last spring I had opted to do an introduction to physical science and that the mathematics underneath a system explains the system - juggling stationary versus juggling on a RipStik produced parabolic arcs of different widths to an external observer, but the quadratic nature of the mathematics remains the same.]

Fall 2018, however, introduced new 50 minutes class periods (class periods have been 55 minutes since I came on board in 1992). There was still the requirement to be met of introducing the syllabus, and, in the wake of the adoption of Schoology January 2018, I also distributed a tech websites and apps handout aimed at helping the students set up their Schoology (COM-FSM), Google Docs, Desmos, and online textbook technology stack. I did not, as I did in the fall of 2018, display the tech stack on the monitor at the back of the class. 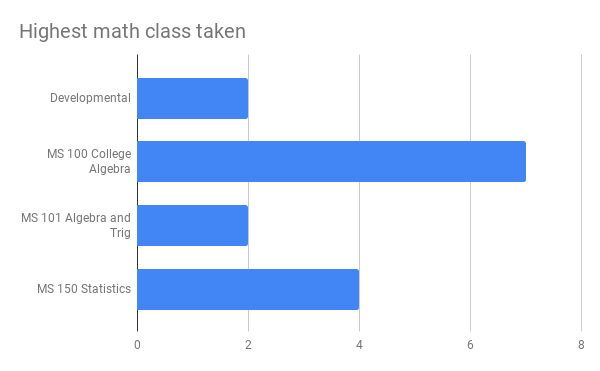 Although the strong majority of the students who reported taking a mathematics course reported having had a college level mathematics course, overall performance on the pre-assessment was below 50% at 43.4% correctly answered questions. And, yes, there are correct answers in mathematics.

The only skill the students securely have term after term is the ability to plot (x,y) scatter points. Of note this term was lower than previous averages for writing out an equation, making an inference based on the slope value, and calculating a slope from data. I continue to hold to the theory that mathematics courses do not succeed in teaching retained mathematical skills nor mathematical thinking. Both the traditional mathematics curriculum stack and the way in which mathematics is taught would have to change. I prefer  mathematics to occur in a context and to focus on a single equation rather than problems one to thirty even.

Wednesday I went over the pre-assessment - I want the students to have the answers. One cannot improve one's performance in a skill until one understands both what was performed incorrectly and what the correct performance would have been. 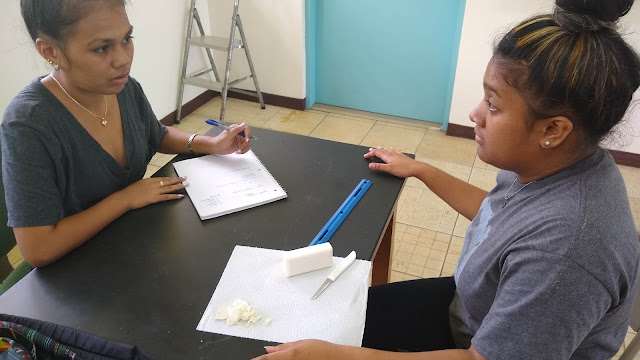 Gina works with the soap while her partner records data

Physical science provides systems that put a single equation into a context where the mathematics has a physical meaning. In the first laboratory the students determine the density of soap by measuring the volume and mass of rectangular slabs of soap of varying sizes. This yields a linear relationship 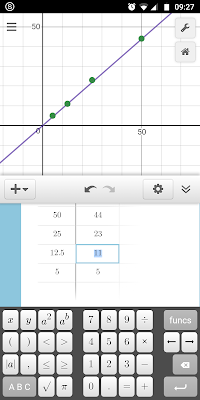 Data recorded in Desmos during the laboratory session in A101

The soap data usually yields a very linear relationship where the mass is equal to the product of the density and the volume. The line visually depicts both that the mass can be predicted from the volume and suggests that at zero volume the mass is also zero. 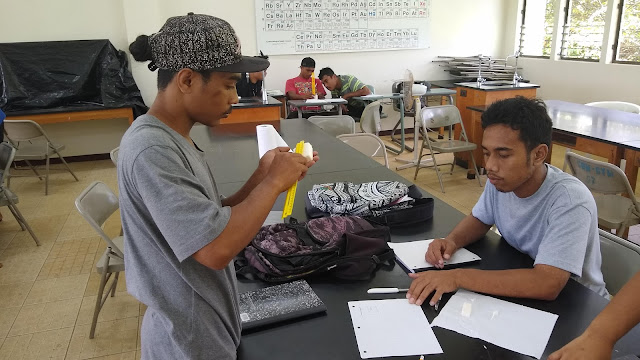 In the second half of the Thursday laboratory period, the class moves up to the A204 math and science computer laboratory to begin to learn to make laboratory reports. 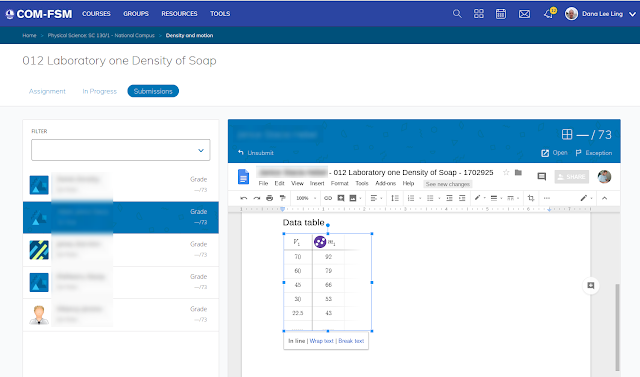 In general, the students are fairly tech savvy. In one period I am introducing the students to Desmos' graphing and mathematical systems software, Schoology, and Google Drive Assignments. Along with the physical system being explored and the mathematics underneath the system. And sorting out the few students who do not already have a Google login.

Although I always find myself too busy to obtain an actual survey, this term only a couple of the thirty students did not have a Google login. As a plus this term, Google can now send SMS messages to 691 (FSM) phones making the verification process much easier.

As this is a lot to absorb in a single three hour session, this structure of gathering data and then going to the laboratory is repeated in week two and three.

By the end of the morning five students of the thirty had turned in a laboratory report.

Once the students have obtained a slope value, the students use the slope to predict whether their soap should float or sink. A beaker with water is then used to test the predication and to see if, as Freeman Dyson noted, their soap knows what to do - a quote that I read at the start of the laboratory:

"For a physicist mathematics is not just a tool by means of which phenomena can be calculated, it is the main source of concepts and principles by means of which new theories can be created... ...equations are quite miraculous in a certain way. I mean, the fact that nature talks mathematics, I find it miraculous. I mean, I spent my early days calculating very, very precisely how electrons ought to behave. Well, then somebody went into the laboratory and the electron knew the answer. The electron somehow knew it had to resonate at that frequency which I calculated. So that, to me, is something at the basic level we don't understand. Why is nature mathematical? But there's no doubt it's true. And, of course, that was the basis of Einstein's faith. I mean, Einstein talked that mathematical language and found out that nature obeyed his equations, too." – Physicist Freeman Dyson

And the soap knows the answer - if the measurements are "carefully, skilfully, and deftly, not heedlessly and bunglingly," William Gilbert (1544 - 1603). The most common error this term was again the measuring of the thickness of the soaps. A ruler in A204 is a must to correct this post-hoc using the chunks of soap the students brought upstairs with them. With that correction, both Ivory and the Jergens soap drop below one gram per cubic centimeter, predicting that they float, which they both do.

Although the laboratory continues to function well as an introduction to measurement, the laboratories, and the technology around the laboratories, some students still evidence the idea that the size of the soap chunk is connected to whether the soap will float or sink. This means that the understanding that the density is a constant for any size chunk of soap is not being fully understood. Still, this is a subtle concept.