When the network lights went out

June 04, 2018
With only six of twenty-two laboratory reports submitted from week one, and having seen the extreme mathematical weaknesses of the students on the pre-assessment, I knew that the other eighteen reports would not come in of their own accord. Over the weekend I began resecting the syllabus, including planning to spend Monday on producting laboratory reports. I already knew from grading on the weekend that sharing of Google Docs files was going to work best for marking paperless laboratory reports here. Schoology has proven rather slow, although marginally usable. That jury is still out on whether Schoology is functional here. 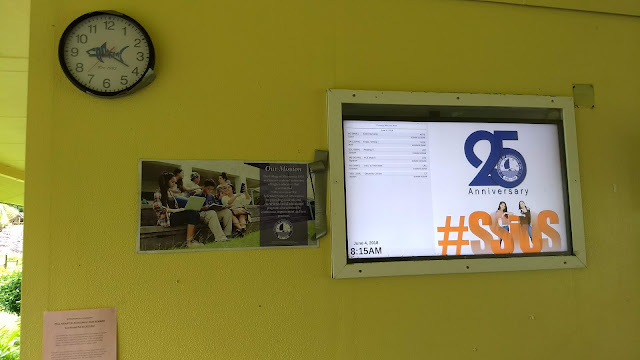 When I arrive on campus, the Internet is down. Hard. I had hoped to print out some laboratory guidelines and templates. No network meant no printing. And no work on Google Docs based laboratory reports let alone Schoology. Not to mention Desmos. And a need for a plan G in class (plans A through F were ripped through and discarded during last week). I did get a chance to look in the locked cabinets in the science laboratory. Nothing of particular use in those cabinets. I was not surprised, but I was hoping against hope that something might be tucked away of some use.

Class launched sans network capability. I covered the working of velocity problems in detail and then let the class go. Later in the day the issue, which was over at the telecomm side, was resolved.

Thus far everything has been an interesting challenge. I could not print Google Doc from FireFox - an issue with FireFox, but no Chrome on these machines. And no ability to print from my ChromeBook. I did get a desktop, but have to download Google Docs and then print from Word and Excel. Everything is like that. Two to five extra steps to get something done. Oh, downloading Chrome? Failed three times, trying a fourth time but I hear the 39th time is the charm.

On the upside, fantastic support from everyone here. Great crew, always working together. The challenges come with being out here beyond the outer edge of paradise. Kluge missed one thing: this is not beyond the outer edge of paradise, this is a verdantly green tropical wonderland with a team accustomed to working together and supporting each other to overcome challenges.