RipStik wave and the speed of sound

June 21, 2018
I attempted to introduce waves by riding my RipStik on the porch at the Kosrae campus main building. 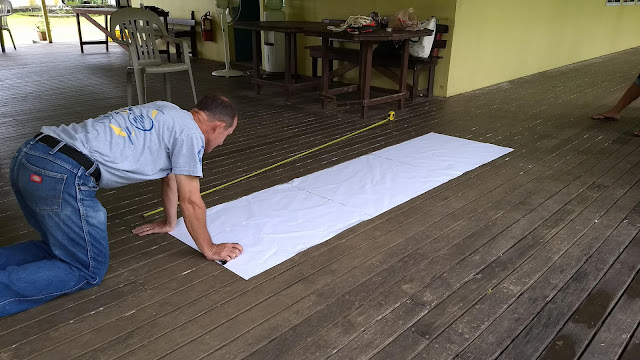 This would fail as the boards would be too smooth to leave behind a wheel track imprint from the RipStik. 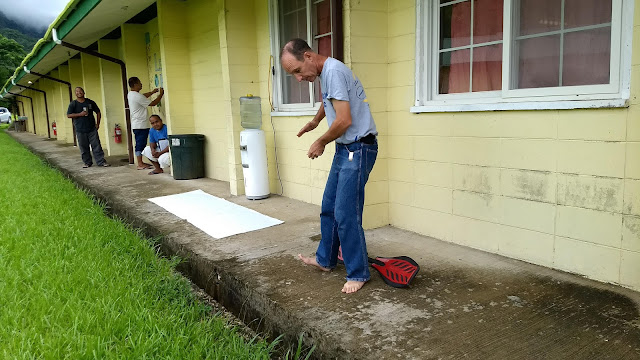 I moved over to the library where the sidewalk was not wet from the morning rain and promptly slid out on a remaining patch of wet sidewalk which had a thin layer of cyanobacteria on the sidewalk. That spill provided me a chance to discuss Newton's third law only operating when an opposing counterforce can be generated - the RipStik generates propulsive force via friction. No friction, no counterforce, and the board slides out. Newton's second law comes into operation: without a counterforce, my force on the board accelerates the mass of the board out from under me. A conservation of momentum moment occurs: the boards goes skittering farther than I do. Less mass. 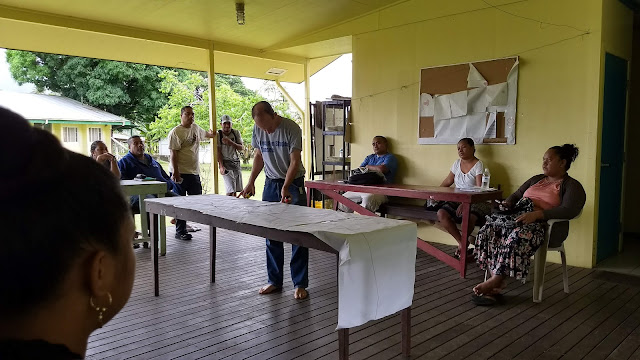 I then brought the paper and the class back to porch to continue the class. 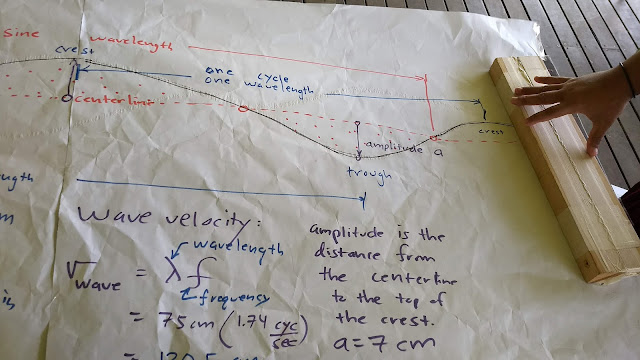 There I used the wheel marks to introduce crests, troughs, wave length, and amplitude. 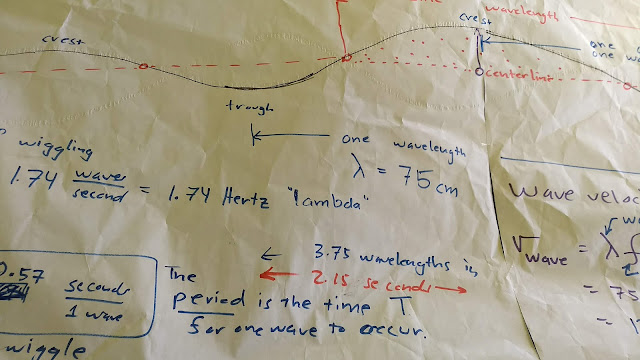 I had timed the run with a stopwatch, so I could also calculate the period, frequency, and the wave velocity. 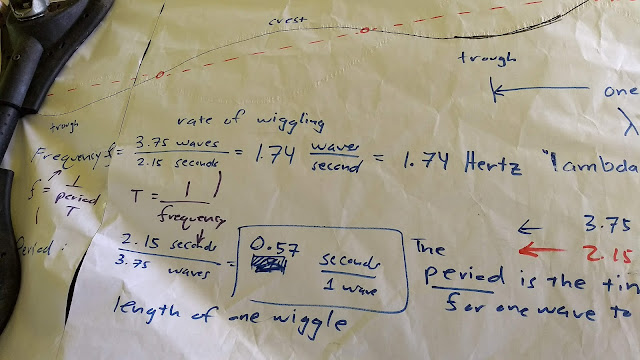 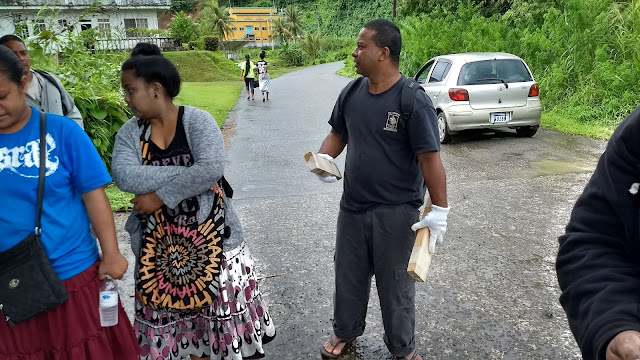 Edward volunteered to handle board clapping duties up at the college river bridge. 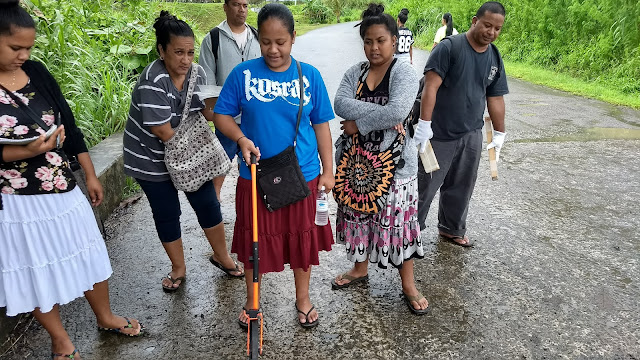 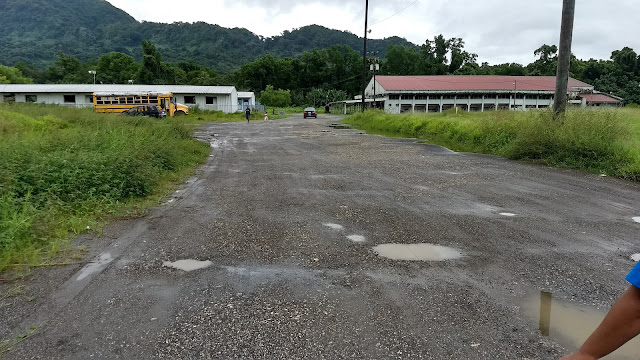 In and around the campus this was the only straight shot available to us. 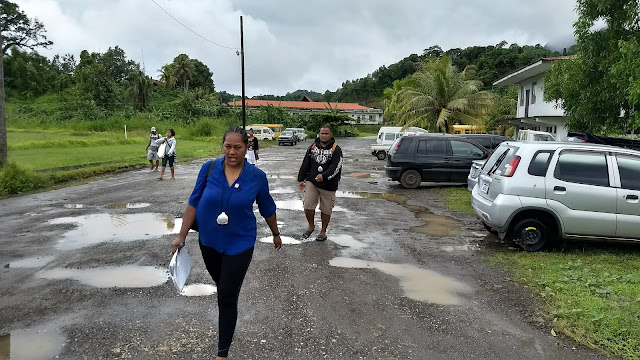 Jayleen on the lead.

This would prove to be a mere 250 meters - a distance that experience on Pohnpei has taught me was a bare minimum distance to measure the speed of sound by hand timer. 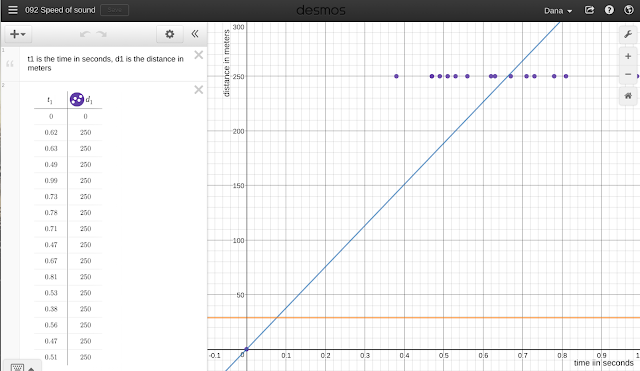 Five timers at a single 250 meter distance, multiple timing runs, a couple clear outliers at 0.25 seconds and one over two seconds were eliminated from the data. The presumption was that at a distance of zero from the clapper the time until one hears the clap would also be zero. Hence the (0 seconds, 0 meters) y-intercept. 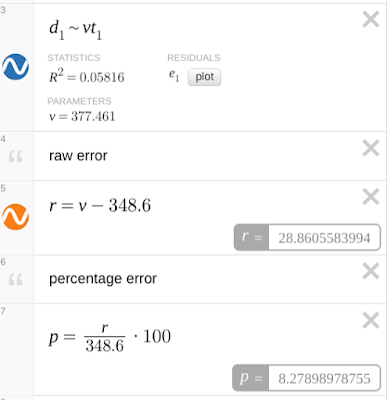 Although the distance was minimal for the laboratory, the result of 377 m/s was within 8% of the 349 m/s value at 29° Celsius. That the result was within 10% was encouraging. For hand timing at 250 meters, that is good enough.
physci