June 26, 2018
On Monday in physical science class I covered the concepts of and relationships between current, voltage, resistance, power, and energy. I also showed how one can calculate the per hour cost of an appliance using the utility rate in kilowatt-hours and the power consumed by the appliance. On Tuesday the class visited the Kosrae Utility Authority. The class wishes to thank General Manager Fred Skilling for permitting and hosting the visit by the class. Thanks are due to Tolenna Joe for his presentation on energy efficiency and conservation. The class also thanks electrical engineer Gerry Protacio for the excellent presentation and tour. 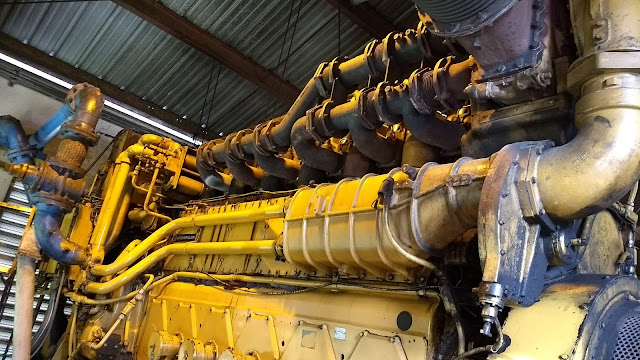 The engine for the 1500 kW generator

General Manager Skilling opened by welcoming the class an explaining that KUA has four main divisions. 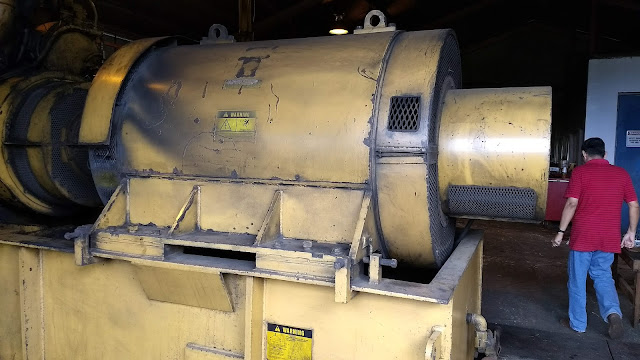 Engineer Gerry Protacio noted that he was not going to go into Ohm's law and all of the electrical physics, he noted that he expected that the class instructor had already covered these areas. And indeed I had introduced the class to Ohm's law and the relationship of voltage and current to power. Mr. Protacio then went into detail on power systems that keep the lights on in Kosrae. He noted that there are three stages: 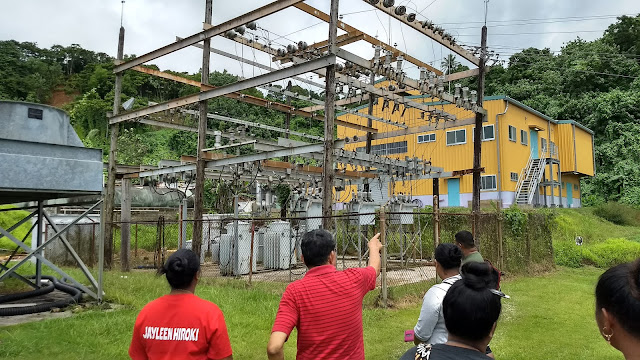 KUA has five diesel tanks with 67,000 gallons of diesel capacity. That is where the power starts: no diesel, no power. 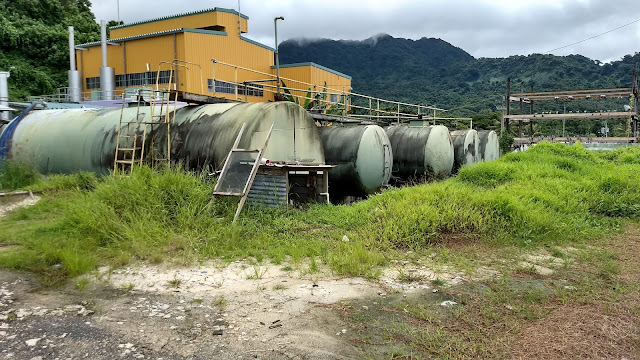 At present KUA has one power plant and hopes to open a second, new power plant in 2019. The current power plant has three operational Caterpillar generators: a 1500 kW unit, a 1000 kW unit, and a 400 kW unit. These each produce 4160 volts and are considered low speed generators in the industry. 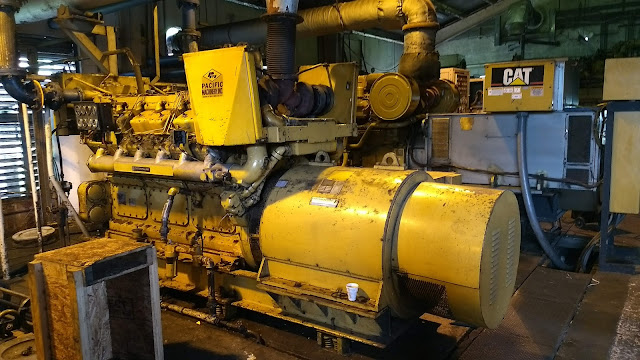 One of the smaller Caterpillar generators 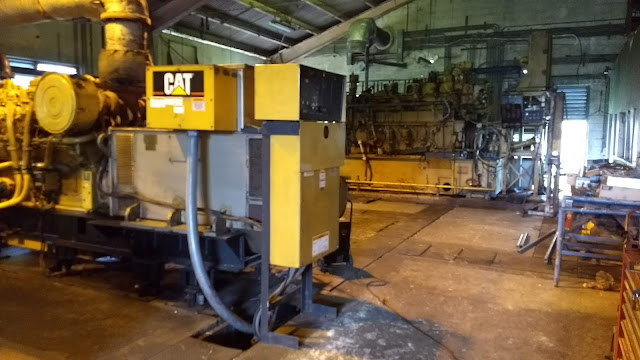 The third engine. The engine at the back is beyond overhauling and is not used

Kosrae island has a peak load of up around 1200 kiloWatts with an average load of 600 kW. 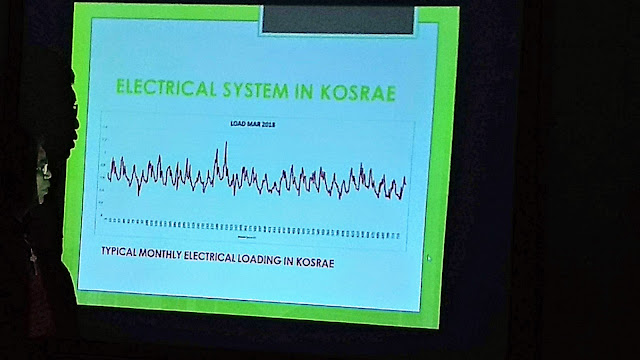 Peak load is typically a resulf of a combination of a hot sunny business day when government and business air conditioning units are running at full power coupled with full fish freezers up at Okat. The fish storage freezers at Okat, along with freezers and refrigerators across the island, pull peak power in the middle of a sunny day. 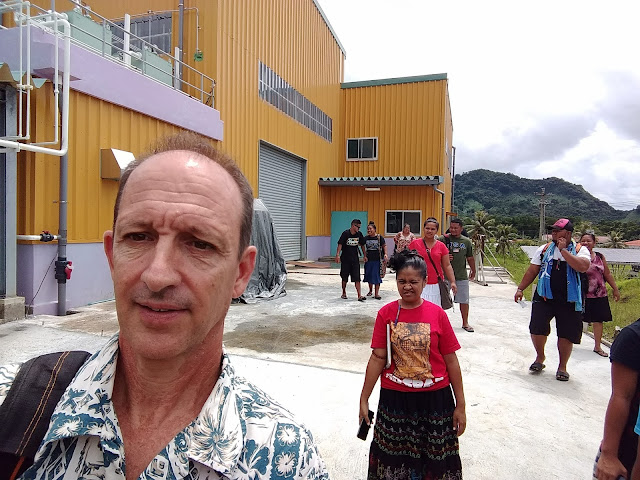 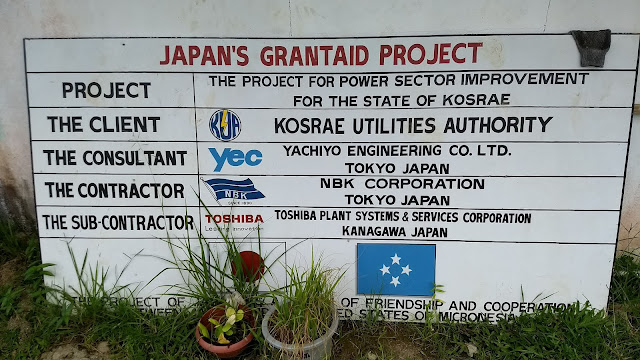 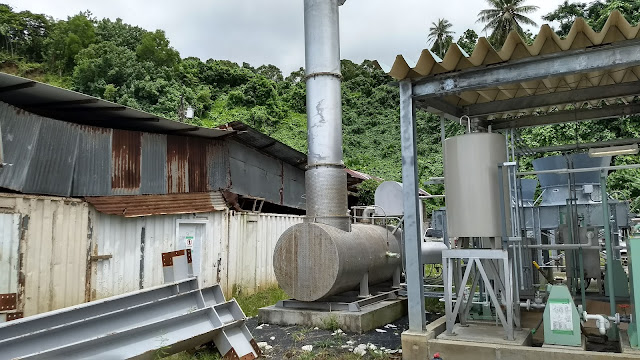 A grant from the World Bank will provide a new 600 kW unit outputting 4160 volts. This unit will be housed in the existing powerplant and will, along with the other 4160 volt generators, provide standby and backup capacity for Kosrae.

KUA uses step up transformers bring the 4160 volt generator output up to 13800 volts for transmission. The two new generators in the new power plant will directly output 13800 volts. 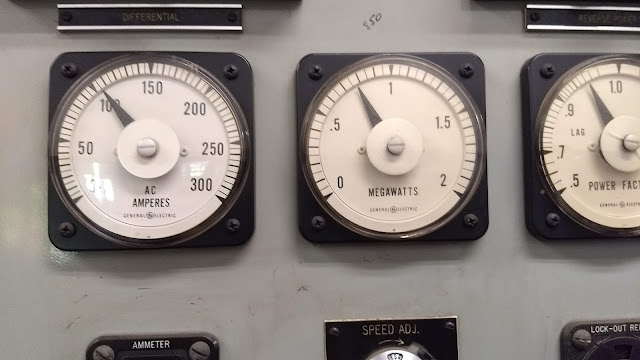 During the tour the class was permitted to view the power control and protection switchboard. The lecture on Monday was intended to make the values seen in the images make sense. The 1500 kW unit was outputting 105 alternating amperes of current. The generator was producing and the island was consuming some 775 kiloWatts of power. Due to the age of the generator, the unit is usually not used to produce more than 1200 kW of power. Fortunately the peak power demand at present is 1200 kW, and even that is seen perhaps only once a month. 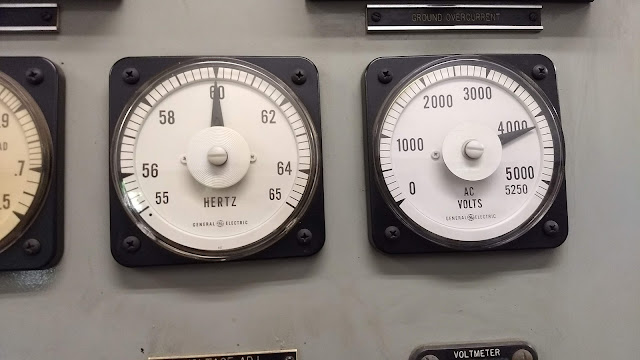 The generator was producing spot on 60 Hertz. Voltage output was the rated 4160 AC Volts. 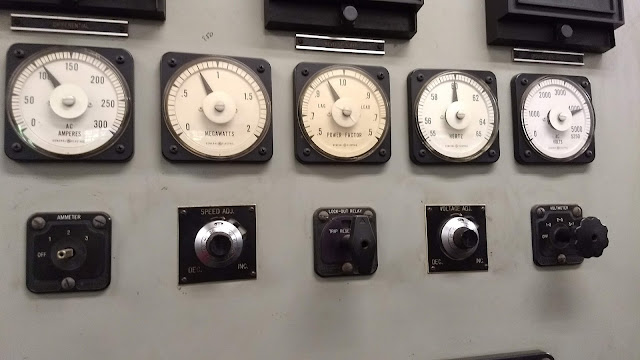 The power factor was just under one. One would be the theoretic ideal, but this cannot achieved in practice. 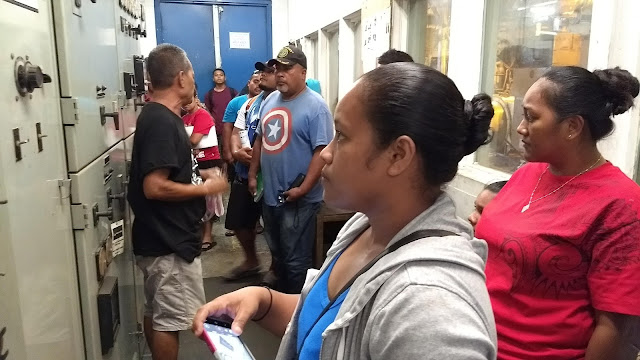 Paul asks a question while Monalisa and Jayleen observe the output

KUA has three circuits on island. Tafunsak, Lelu, and Malem-Utwe. 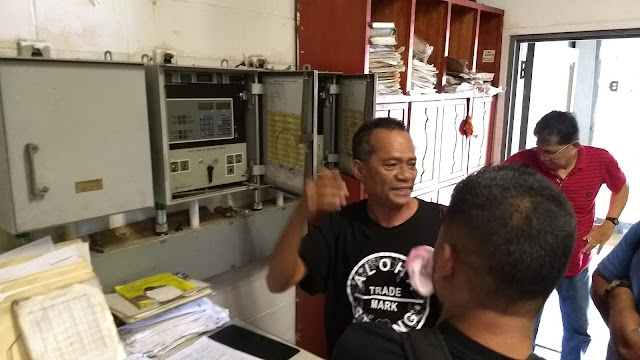 The left panel is Lelu, the middle and open panel is Tafunsak, on the right is Malem-Utwe. Each line is three phase at 13800 volts on the top lines. Step down transformers bring this down to the 110/220 that households and offices use. There is a 500 kVA pad mounted transformer in Okat to service the fish freezers there. One might note that there are no poles or lines along the road at the airport. Due to FAA regulations, the power lines run in underground conduits. 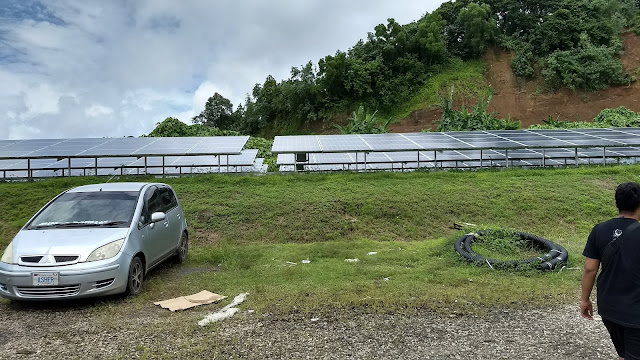 Kosrae and KUA are working towards the FSM national goal of utilizing 30% renewable resources by 2020. At present Kosrae has a 100 kW grid connected solar panel array in front of the state government central administration facility. Just immediately to the south of the power plant, KUA has another 200 kiloWatt grid connected solar panel array. These two arrays produce on the order of 7% of the power supplied to the island.

KUA wants to expand their solar capacity. The issue is not actually a funding issue but rather a land issue. Ramping up to over four times as much area under solar panels requires more land that is presently available to KUA. 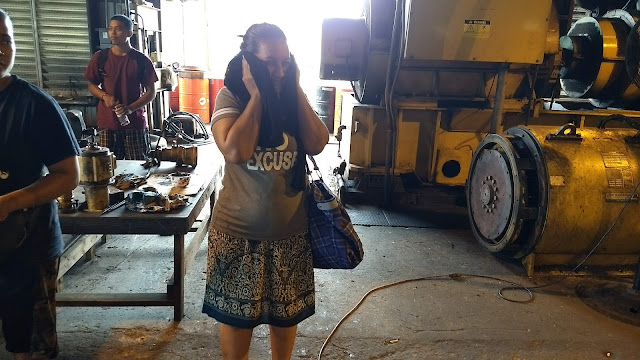 Standing next to the main engine powering the island is a deafening experience. The solar panels produce energy without making a sound. 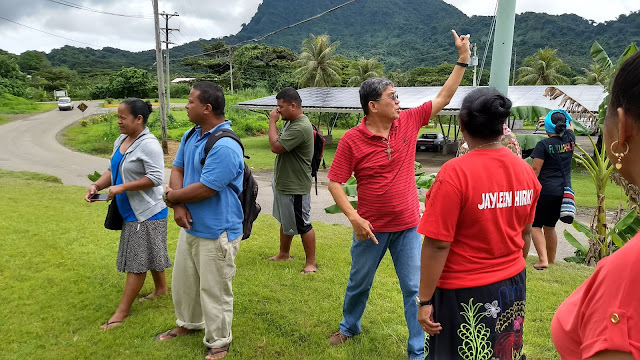 As Gerry explains the distribution substation, the 100 kW unit can be seen in the background 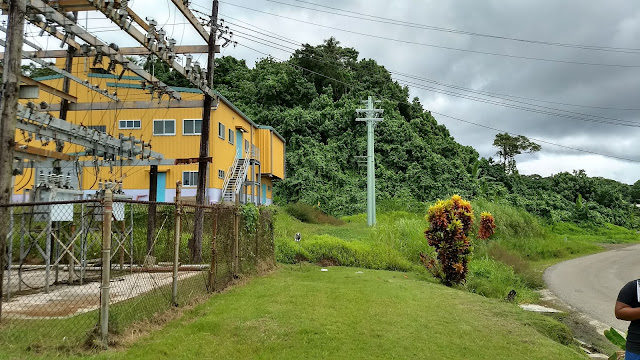 In the future, the power from the new generators will enter the grid from the two green poles seen here 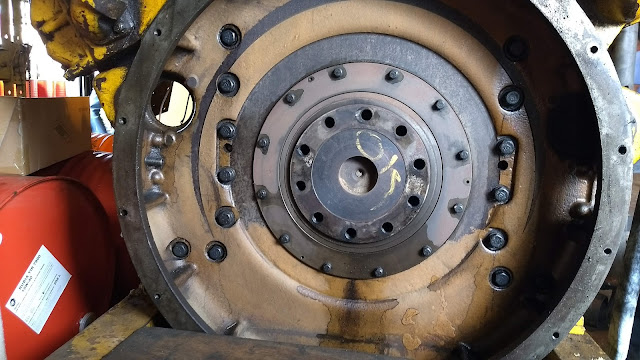 Generator attachment point on an engine

After Mr. Protacio's presentation, Mr. Tolenna Joe gave a presentation on energy efficiency and energy conservation including ways in which the students and their families can conserve power. Mr. Joe noted the importance of power conservation for Kosrae, for KUA, and for the global environment. I know a number of students will be heading home to test the seal on their refrigerators by seeing if they can pull a dollar bill out from the closed refrigerator door. 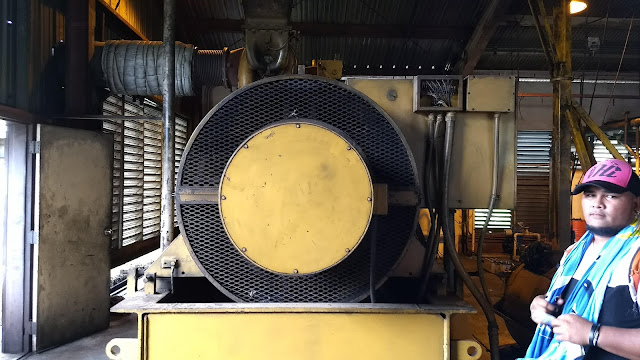 The class owes a debt of gratitude to KUA and their personnel for taking the time to thoroughly brief the students on their operations and show the students the application end of the theories covered in class. Thanks are also owed to Instructional Coordinator George Tilfas and the Kosrae campus administrative team for supporting the class in these activities.
physci