June 05, 2018
Each term I introduce acceleration by accelerating a RipStik from rest across about a 1000 centimeter distance. This summer I noted that the high school parking lot might be used for this experiment. The sidewalk in front of the college had grooves that proved destabilizing the week before and thus I had ruled that location out.

The high school parking lot has gravel of just the right size to bring a RipStik to a sudden stop. In an initial trial cruise I hit just such a rock and went of the RipStik. I was surprised that I managed to land on my feet, not bad for a 58 year professor. I still have some agility.

I cleared a likely route of the worst gravel. A true zero start proved impossible, there was nothing to hold onto to permit a zero speed launch. I briefly considered using a pile of old broken bamboo nearby, but discarded this in favor of a minimal push start. I had chalk timing marks at 100, 200, 400, 600, 800, and 1000 cm. I knew from experience that acceleration beyond 1000 cm was chancey at best. 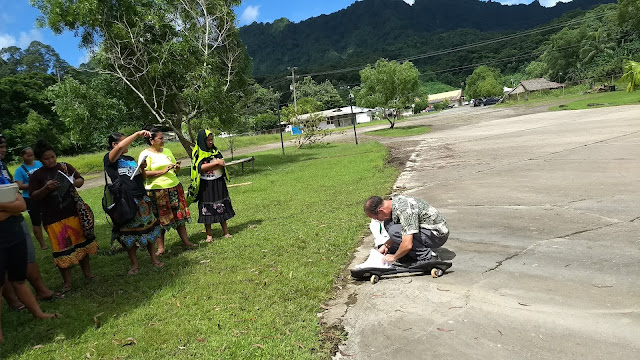 Recording data after a first run

On run one I quickly discovered that the cement had places where excess cement made bumpy areas on the otherwise apparently smooth surface. These proved destabilizing. I would hit one, bobble slightly in balance, and back off the acceleration push as I regained balance, and then try to dig back into the swizzle. I was not encouraged by this - I had no idea whether I would have anything reasonably arguably close to a parabola. 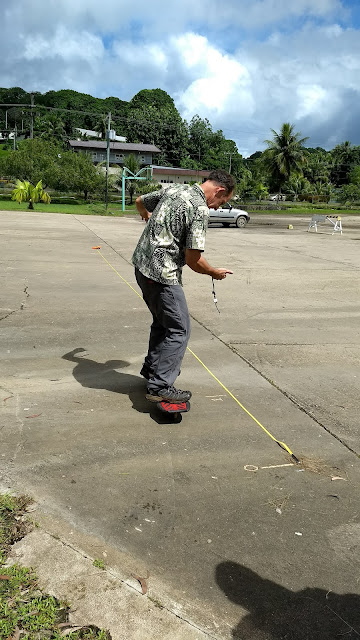 I could see in the splits from the first run that my acceleration was uneven. I opted to try a second run, hoping practice would improve my ability to accelerate on the rough surface. 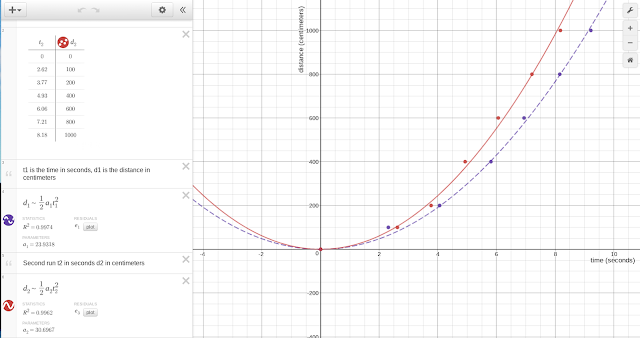 I was pleasantly surprised to find when I ran the data into Desmos that both runs well supported a parabolic interpretation. I used Desmos to change the exponent to a one for a linear regression and to a three for a cubic regression and in neither case did the resulting regression line come anywhere near the data points. This is another strength of Desmos: one can interact in real time with the data, instantly show that other models will not work. What I could not show from a data driven perspective is why the exponent would be a whole number. And there was a better fit at the 1.89 power for the first run.

The two accelerations, of 24 cm/s² and 31 cm/s², were well under values achieved in Pohnpei, thus the surface had a strong impact. Still, the quadratic nature of the system was well revealed.

Laboratory three builds on the RipStik exercise and is an acceleration of gravity (g) measurement accomplished by measuring the fall times (t) for a small ball from increasing heights (d). Desmos is used to run a quadratic regression against d ~ ½gt². The class started with a zero height drop in the Kosrae computer laboratory. The physical science class has been blessed with access to the computer laboratory from 9:30 lecture start to 2:30 lab completion - I owe an ongoing debt to the team here for providing that access.

I knew where I want to go with this laboratory on Kosrae. 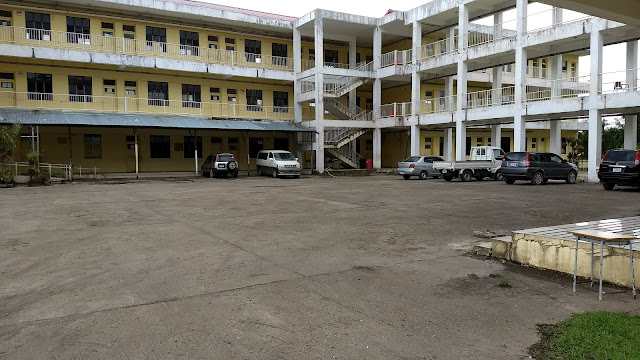 A three story building sits next to the college: a high school. A high school that has already seen graduation. That building called me like a Siren of Titan from the first time I saw the structure. There were record setting drop heights for the course available at that building.

The class started in the parking lot with drops of 100 cm and 200 cm. Then we moved up one story. I experimented with using the staircase landing, but the students liked a location to the left where the balls fell on a very smooth, low parking lot wall. 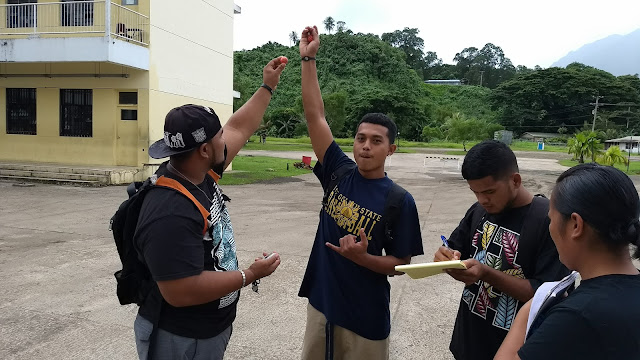 200 cm drop height is the power band on his wrist 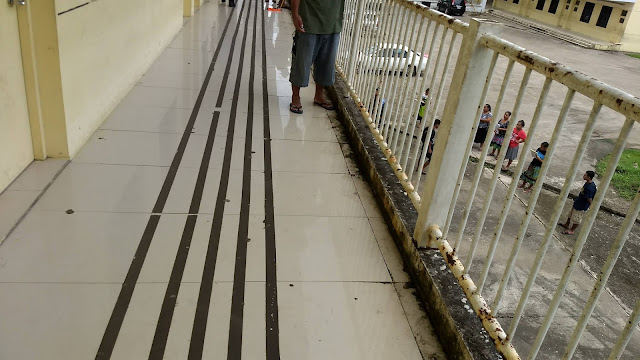 When I sensed that no one was eager to climb up another flight of stairs, I decided that I would be a solo timer and ball dropper from the third floor. The third floor was 956 cm to the pavement, and 930 to a marble step next to the low wall. I measured both, a couple balls would land on pavement, the rest on the step. The drops were long and this actually made timing somehow more difficult. Also the technique of watching the spot where the ball will land is harder to use when the ball drifts slightly on the way down: the exact impact spot is not as pre-determined.

The class stood on the ground well back from the ball drop zone, and I ensured that I called out drops prior to release. The balls were small plastic high bounce balls sometimes referred to as superballs - low in mass. 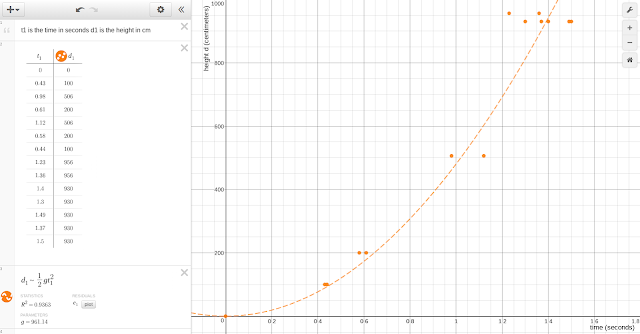 Data derives from more than one group

During the computer laboratory session after the data gathering, the students found that they were able to load and access Schoology - with patience. And waiting for pages to load. The waits were, however, tolerable. 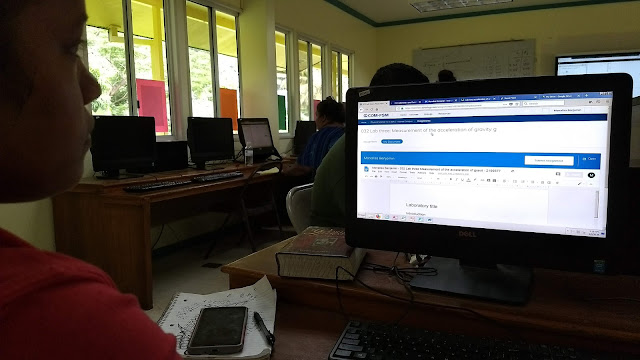 At first a couple students tried using Google Drive Assignments from within Schoology, and rather quickly a number of other students copied these students actions. I was walking around assisting students, expecting that they would primarily work from Google Docs natively and share the Docs to me. 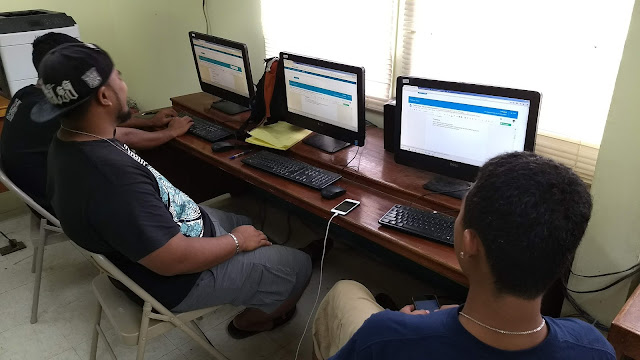 Very rapidly, however, the majority of the class was using Google Drive Assignments from within Schoology. No specific training required. Once the Google Doc is open, bandwidth is not particularly an issued. 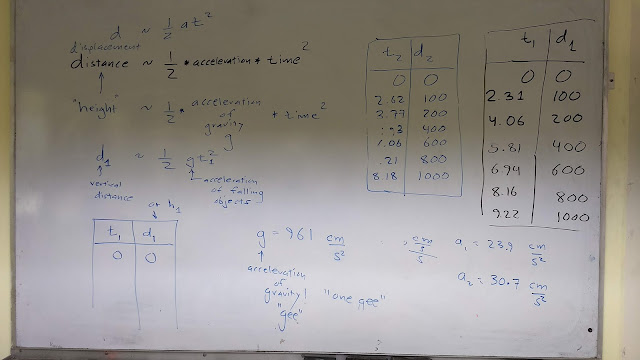 The board at the end of both periods - data remains from the RipStik run along with the RipStik accelerations, the value for g reported above is also on the board.

Both the RipStik run and the ball drops from over 900 centimeters were memorable events for myself and, I suspect, the class as well.