April 03, 2018
Founding Day 2018 was planned to follow the schedule prototyped in 2017.  A cultural parade would be followed by track events, lunch, and then cultural events. 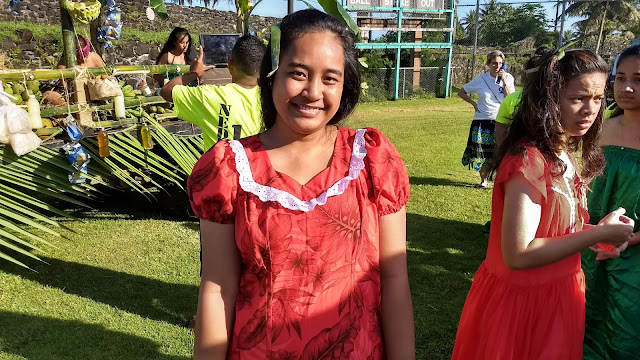 The calendar this year was problematic with April first falling on a Sunday, and not just any Sunday, but Easter Sunday. This would generate complications in securing vehicles and preparing a float. One cannot celebrate one's culture by breaking the rules of one's culture. A Sunday float build was problematic, and islandwide Easter activities meant a truck could not be acquired until late on Sunday.

This pushed the Kosrae Student Organization build into the hours after midnight on Sunday. A few members worked quietly to preposition some materials at various staging locations. 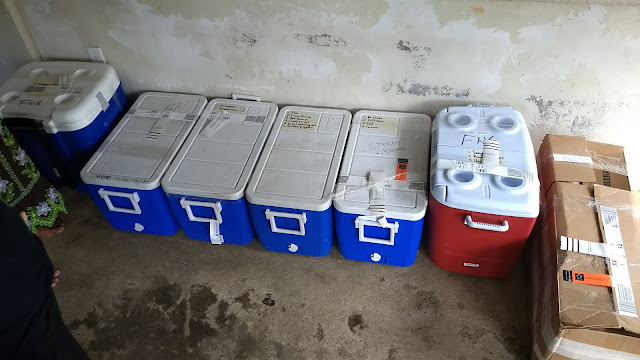 KSO enjoyed massive support from the parents in Kosrae. Six coolers of Kosraean produce and products along with two sakau plants were sent over. The parents also paid for the uniforms and covered all of the excess baggage costs. The team owes the parents a huge debt of gratitude. 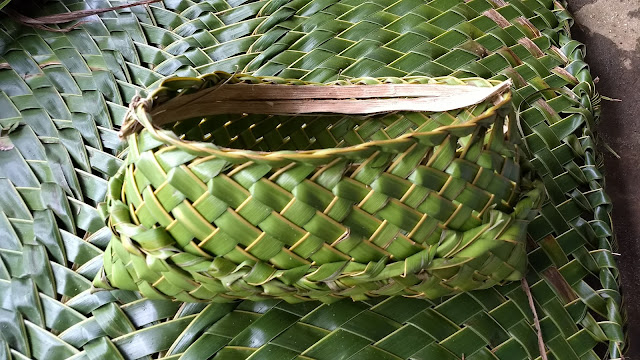 Handicrafts to use on the float were among the items sent over from Kosrae. 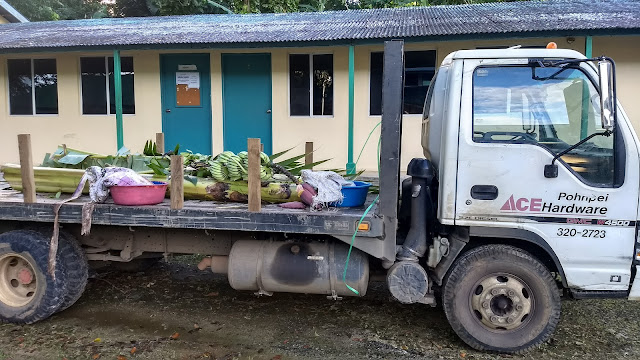 Ace Hardware provided a truck and driver at no cost to the group. This was a huge gift and the team owes thanks to Larry, Richie, and the whole Ace family for their support to the team. Without Ace, KSO would not have had a float. 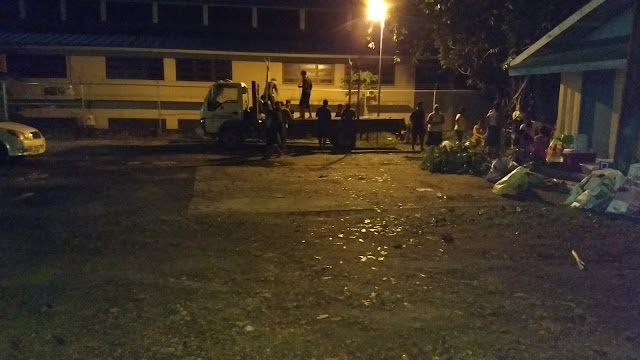 Work proceeded through the night, wrapping up at 2:45 AM on Monday morning. I remained concerned that the team would be sleep deprived on the Founding Day. 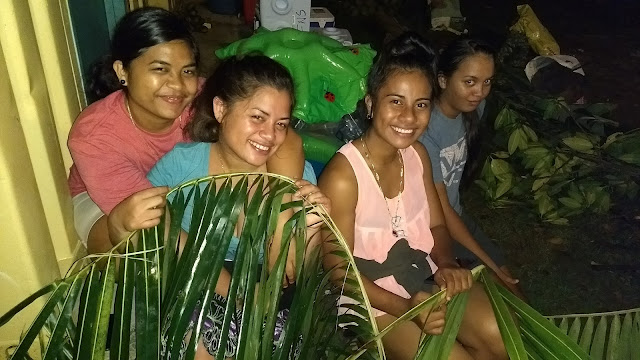 Being young, the team functioned well in the late night work. 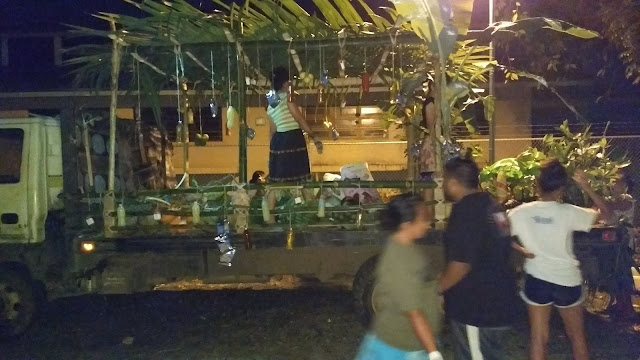 Construction was done on the CTEC campus, which provided good lighting for the build. The team also thanks COM-FSM CTEC for providing the space in which to work. 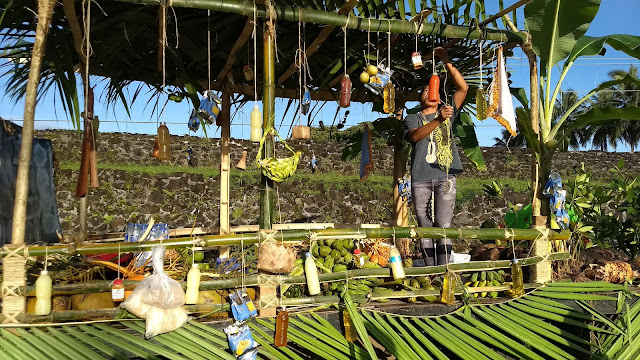 The float was moved to Spanish Wall around three in the morning. Last minute touch-ups were completed prior to 8:00 AM judging of the floats. 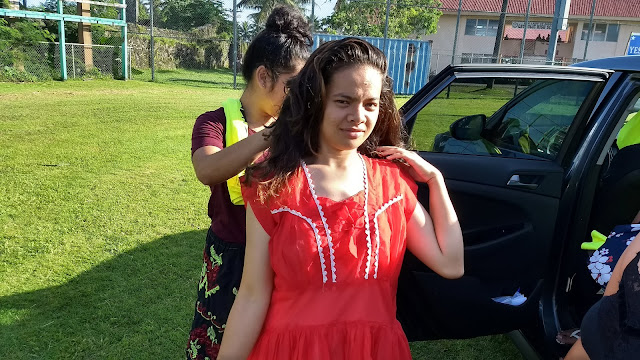 Church dresses from the 1970s and 1980s were sent over from Kosrae and were worn during the Founding Day. 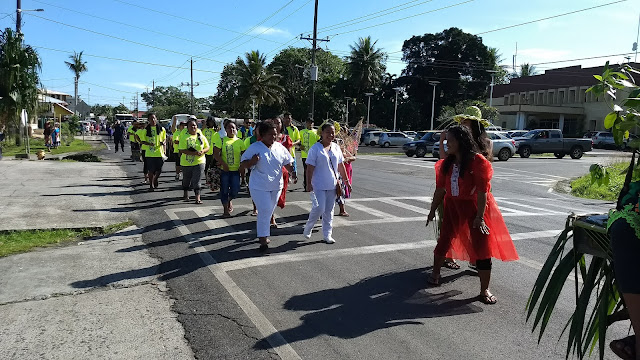 The day was hot and sunny. The college would enjoy three good weather days from Sunday midday into Tuesday. Floats were stocked with water by the college this year. And that water was needed. 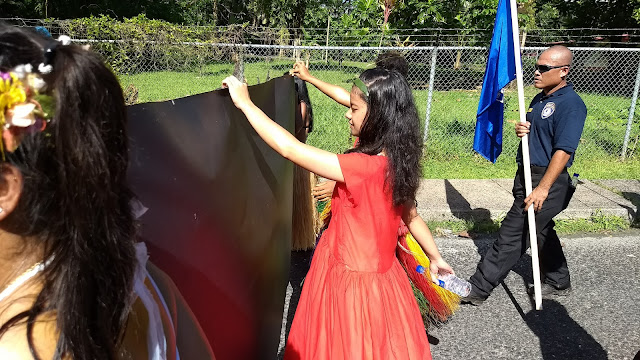 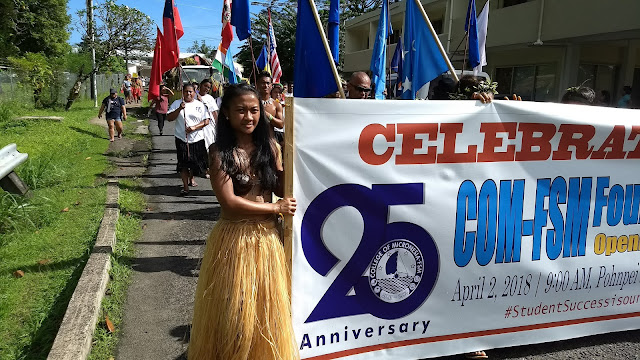 Maryanne on end of the banner.

KSO had been one of the first teams to get in all of their registration paperwork and were among the first to get the necessary medical clearances. KSO availed themselves of the Kolonia Town clinic and thus had teams ready to play when other groups were not yet ready. Having paperwork in order and then always fielding a team ready to go led KSO to dominating athletics in the run up to the Founding Day. This would prove fatefully decisive in the run for capturing the kingship and queenship of the college. 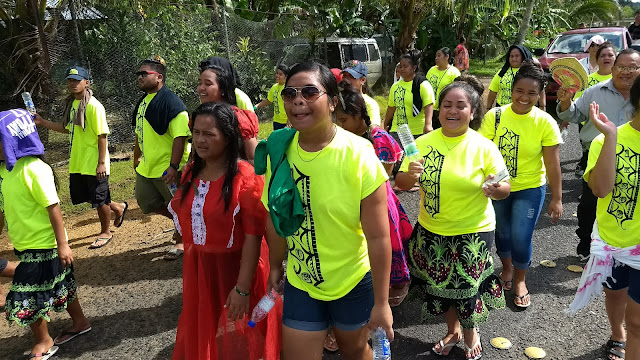 The shirts worn during Founding Day were printed in Kosrae. 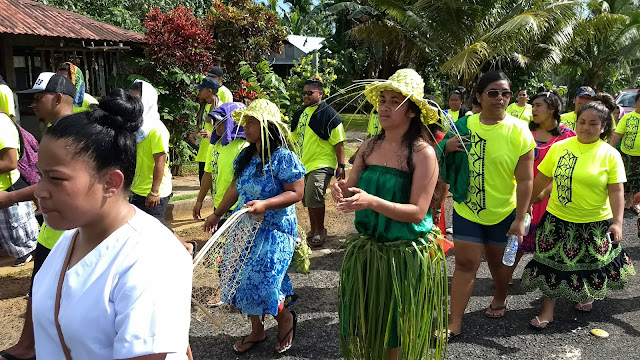 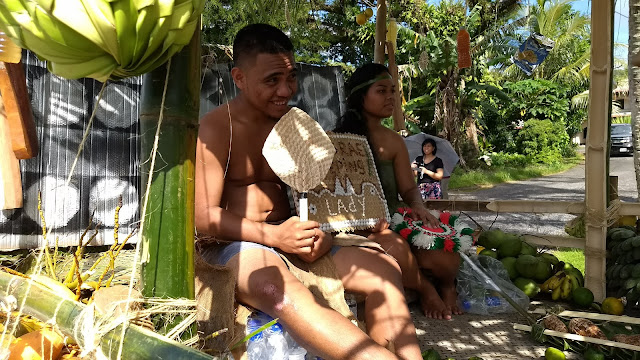 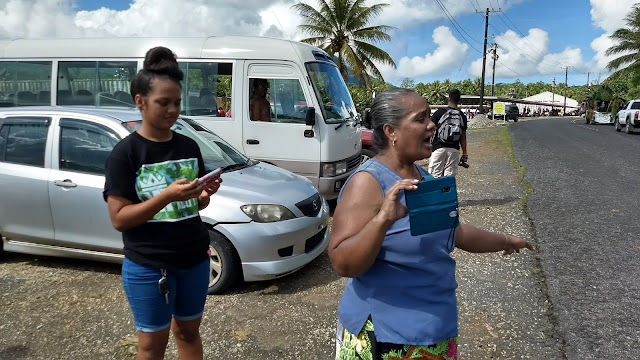 Shanalin stayed home to help with transport logistics during the day. Shrue continued to work as float director and coordinator throughout the day. I am thankful to her for stepping in and directing the float build. 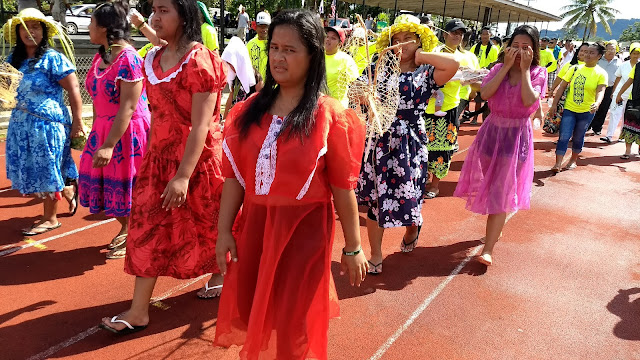 The four dresses all date back into the 1970s and 1980s. There is a touch of the sign of the influence of fabrics from south Asia in the magenta and blue design. President Annie Lee Joe on this end, state representative Tulpe Nena on the far end. Another two older dresses in the second row. Note the sheer fabrics that were used. A chemise was worn underneath in the past. 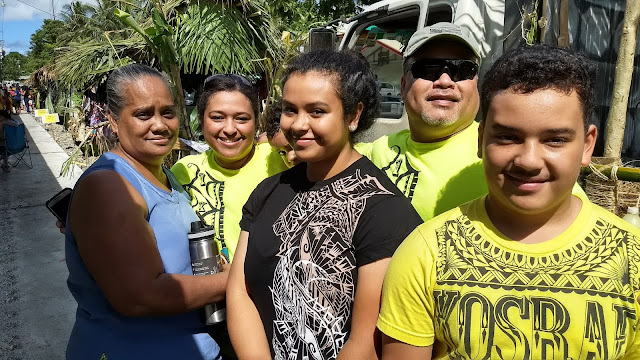 Shrue was effectively the float director for the build. 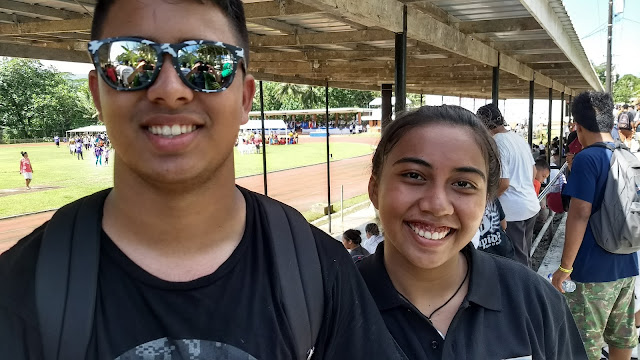 Marlin worked the media crew at the request of the SBA president. 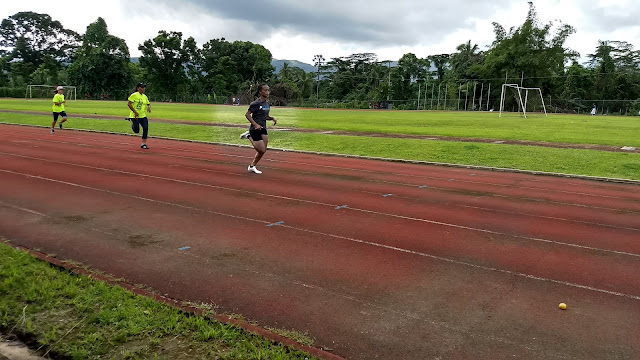 The women's races would prove especially important to KSO. With only three runners, KSO would capture second and third in both the women's 100 meter and the women's 200 meter events. 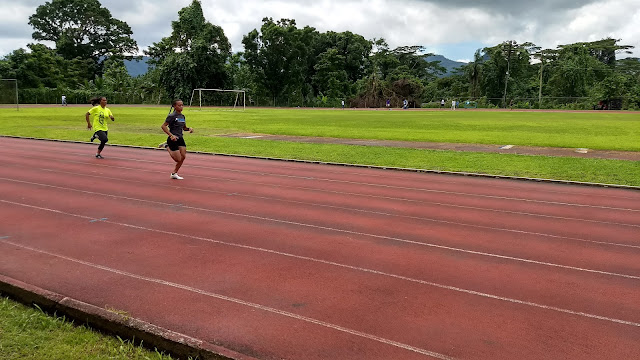 These two wins would garner an additional 8 points, which was larger than the spread between first and second place. 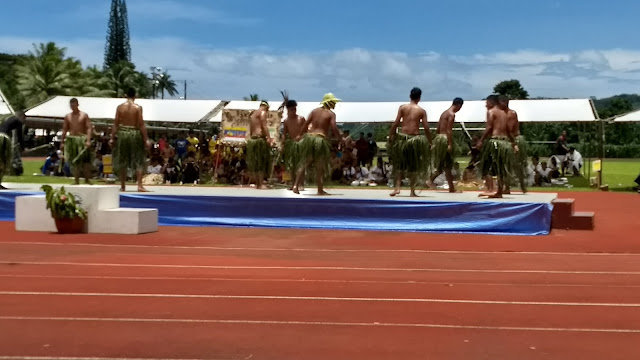 The men did the cultural performance, dancing and moving a "rock log" magically. 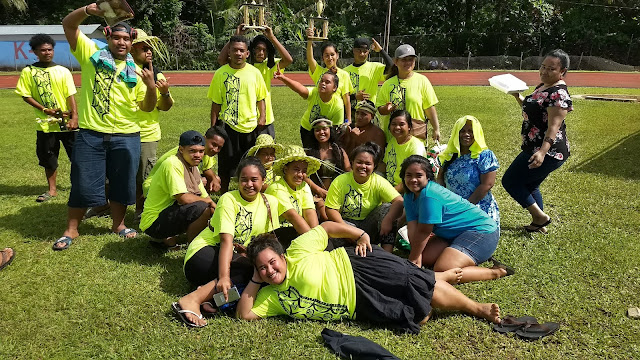 At the end of the day Yap Student Organization captured third place in the float competition, PingMwok took second, and CTEC captured first place. At that point I felt disappointed - I knew how much work the parents as well as the students had put into the float effort, yet we could not break into the top three. 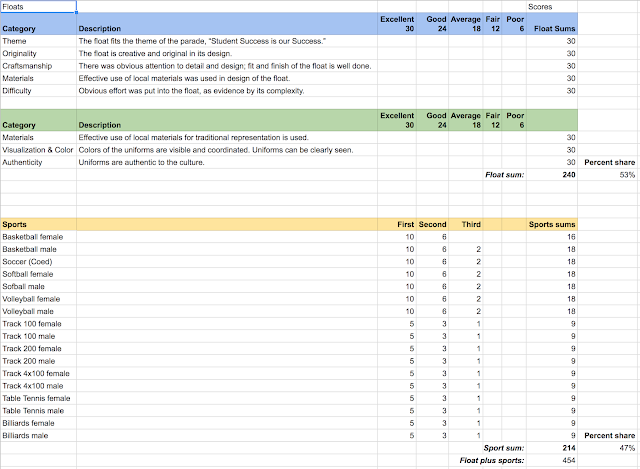 I knew too that the scoring system was designed to give the team with the top float the best shot at winning the overall competition. This was the scoring system I had been asked to design, so I knew not being in the top three in the float competition effectively knocked one out of the running for the king and queen. At this point I thought either CTEC or Yap had the win.

When the announcer called out the winner being KSO I was caught off guard. I was standing off around behind a corner feeling rather badly at the loss in regards the float. I thought our float was second or third behind Yap or CTEC, but not fourth. Without thinking, my very first thought was to object. A split second later as my sleep deprived brain came on line I realized that one cannot object to winning. And a split second after that I realized that I could not logically object to a scoring system I devised. I overruled myself.

CTEC was rightfully puzzled and did essentially object, wanting to know how KSO could win when the float had not even medalled. Turns out the top four floats were all very close in terms of points, and in the rubric, all floats get points, not just the top three. That was, after all, my design. Everyone gets float points. I should have realized that, but I was running on two hours of sleep after a long hot sunny day. There were enough points in the KSO float that the dominating performance in athletics brought home the win for KSO. I would also learn that the float had scored rather poorly, but the effectiveness of our speaker, Kenye Zackilyn George, impressed the judges and kept us in the running.

Separately, I know the college hoped that the invited special guests would remain with us for the day, but they did not. Even the acting president slipped out ahead of the end of the day. As one staffer noted, no worries, today is for the student's to celebrate and enjoy. This is their day. This is about their success. If we are here with them until eight at night, then so be it. This is their time to shine. And I concur, this should always be about the students. So the early departure of the invited guests is not something I see as needing solving. That said, suppose you did want to share some of the culture with the guests. Then you follow the morning speeches with an immediate cultural dance. The track and field can never move fast enough to be entertaining enough to hold the guests there. And the grandstand is not well situated for viewing athletics. The tents were not "side arranged" so sightlines were blocked.

I suspect that we probably ought to re-disaggregate the cultural founding days from the sports founding days. This combined schedule does not permit fun events such as fire starting, coconut husking, coconut grating, tire rolling, and other traditional events. 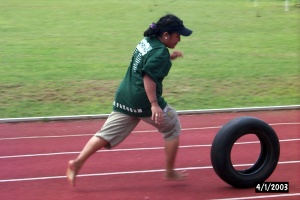 And the combined day forces foreshortened cultural celebrations. The alternation of sports years with cultural years allowed time for both to be fully engaged in. And there was more participation by more groups in the alternating year format. The current format essentially means that one has to have a float, an athletics team, and a cultural troupe. Only the "big" four and CTEC can well handle this format. Groups that are smaller in overall number and resources join with difficulty. This year NuKap only participated in some sporting event. Chuuk Student Organization did not field a cultural presentation this year. And the Mortlocks has not formed a group in a decade or so.

KSO owes a deep debt to everyone who supported the team this year. I am very thankful to the members of the group and the excellence in leadership that has been exhibited by the officers. I am thankful also for the support of my family.