February 14, 2018
In recent terms I have used swizzle rate versus speed of a RipStik to generate moderate to strongly correlated data with a correlation below 0.9. This term I wanted to gather data that I thought might have little to no correlation, data which would also be inherently flawed but would might be fun to try gathering. Being Valentine's Day, I began with a Valentine's day statistics video. At 8:00 I then showed three sit rise test videos. Following this I had the student's obtain their resting heart rate and then perform the SRT with a partner. I made a special note that those with joint issues should opt out. As a result about six students opted, yet I was keenly aware that many of those opting out could actually get down to the floor and did so as a regular part of their cultural life. I wound up losing essentially everyone who would score below a ten.

In the second section I used the fact that is Valentine's day to first have the students determine their resting heart rate using an online clock. I then showed only the first of the three videos. I then demonstrated the SRT both with and without hands, showing the class the pivot down method, emphasizing that the key was to sit safely and stand with whatever assistance one needed. Data would be kept anonymous, cards were handed out and no names were put on the cards. I did act as a spotter on one young woman who would score a seven. 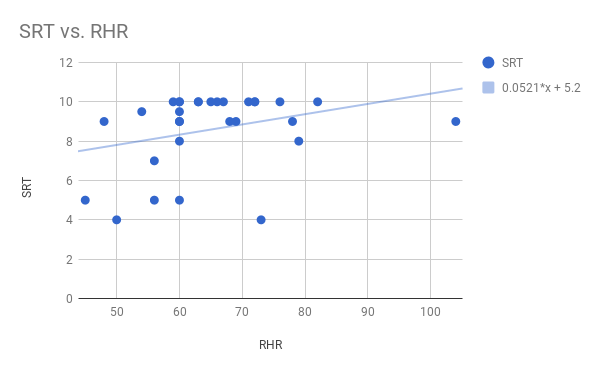 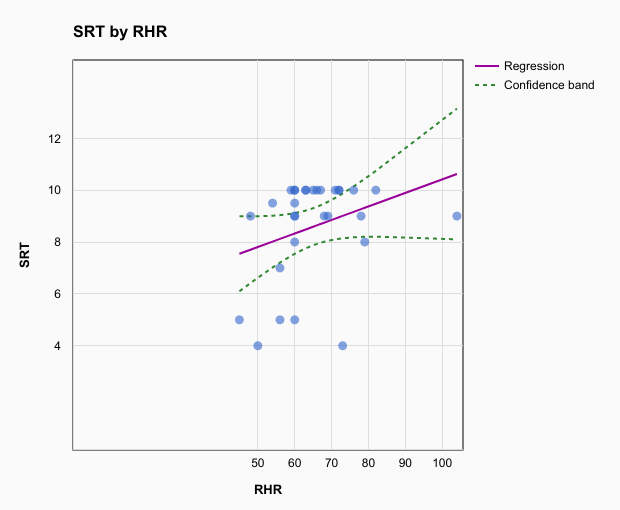 Further analysis with the Google Sheets Statistics add-in showed that the relationship is not significant. The 95% confidence interval for the slope includes a slope of zero. Swizzle rate versus speed was left as a homework problem this term.

Perhaps the correlation might be strengthened by looking at heart rate rise versus SRT score, but I am dubious that there is any relationship.
statistics