January 21, 2018
In the most immediate prior terms I have started the term with an introduction to the course and then I have moved the class up to the A204 computer laboratory to cover logging into Schoology Basic with an access code. This term the Tuesday 3:30 slot, the last class to convene in terms of date time for MWF and TuTh classes, meant that many students would have already been exposed to Schoology Enterprise. And all students were already logged in, so recording grades was not an issue. This did not dawn on me until Tuesday. I opted not to take the students to the computer lab and chose instead to not even meet in A101. 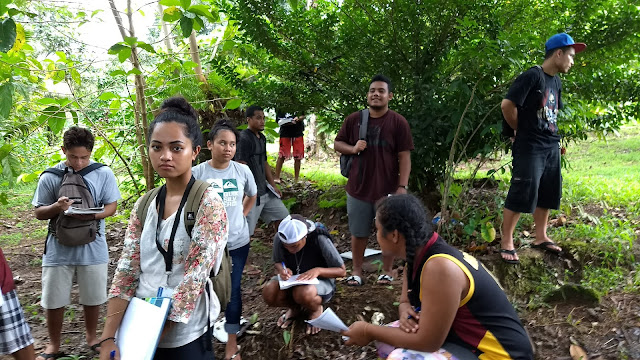 Gardenia jasminoides in the background

I knew oahr would only be known to a few students, but always to a few. I even directly asked students whose names I already knew, including one from Dioan in Kitti. Silence. The only student who could identify the plant was Melissa from Yap who knew that the plant was ar. I then provided the Pohnpeian name and the Latin binomial.

I then headed north into the garden on the corner. Volkameria inermis, Ocimum tenuiflorum, Scaevola taccada were first. The Mangifera indica had epiphytic Asplenium nidus, Lemmaphyllum accedens, Nephrolepis spp., Microsorum scolopendria, and Davallia pectinata. Cyclosorus maemonensis was on the ground nearby along with Colocasia esculenta and Xanthosoma sagittifolium. Morinda citrifolia, Cocos nucifera, Senna alata in full bloom, Gardenia jasminoides, Hibiscus tiliaceus, and Macaranga carolinensis were all nearby.

A heavy curtain of rain appeared over the ridge to the east and no one was yet rain ready - this was just the first day of class. I knew we would eventually get wet, but for the first day we had a good start. In general the students did not know the names of their plants, which was rather surprising and, quite frankly, scary.

The second day was a rainy day. This term I decided to clean up the ethnogarden behind the gym ahead of the banana patch clean-up. With so few knowing their plants, I reasoned that many would not be able to safely use a machete in the tight quarters of the ethnogarden. I made clear that using a machete was optional. The Myristica fragrans was continuing to survive if not thrive. Everything else was surviving and the Senna alata continued to thrive.

Attendance was solid and the class had the basic area around the plants cleared very quickly. Again a shaft of intense rain appeared over the ridge - the La Niña has brought non-stop days of rain to Pohnpei in December and January. Looking around at the spacing among the cutters I deemed that in heavy rain conditions there was too much risk of a loss of grip, and too many students packed too close together. I went ahead and shut down the operation early. The weather prevented photographs from being captured.
ethnobotany