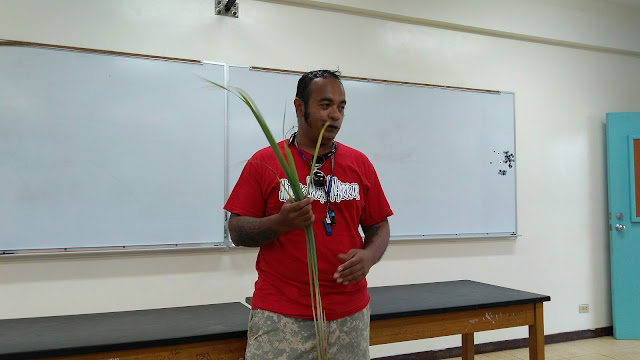 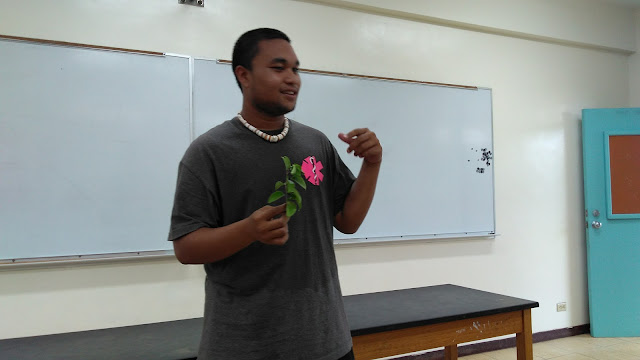 Darion presented the use of Volkameria inermis in an umwulap to treat chest congestion associated with a cold or flu. This led once again to a discussion of the correct spelling and pronunciation of the word. The online dictionary is umwulap, but the word is pronounced by some as umwlap. As Pohnpeian is phonetic, that leads to an alternate spelling of umwlap. This may concern some orthographic purists, but English accepts aluminum and aluminium replete with a pronunciation difference. 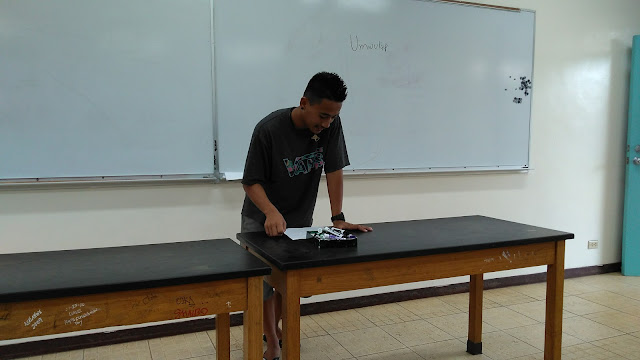 Kimsky presented the medicinal uses of koaloau (Kitti spelling as per their constitution). He noted the use for upset stomach, high blood pressure, and consumption as a tea. All of these uses were not only new to me, but novel in that keleu is not typically a lead medicinal here. When questioned Kimsky noted he had Googled these treatments. This would mark the first, but undoubtedly not the last time, a student Googled medicinal uses for a plant. 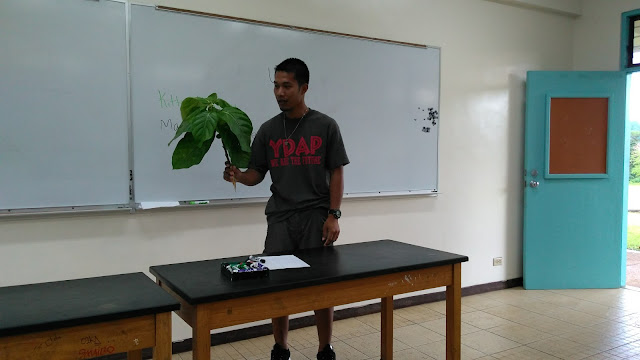 Johsper noted the many healing qualities of weipwul, Morinda citrifolia. 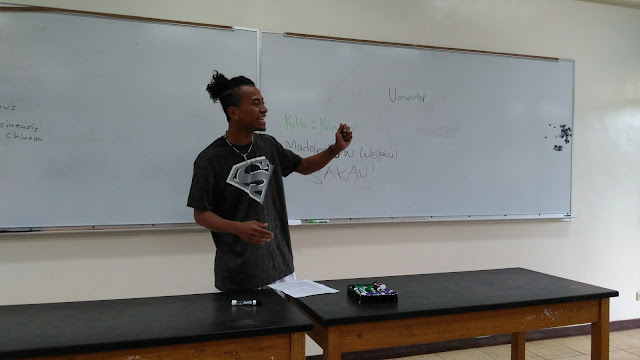 Jade explained the use of tehn sakau, the leaf of Piper methysticum, to staunch bleeding 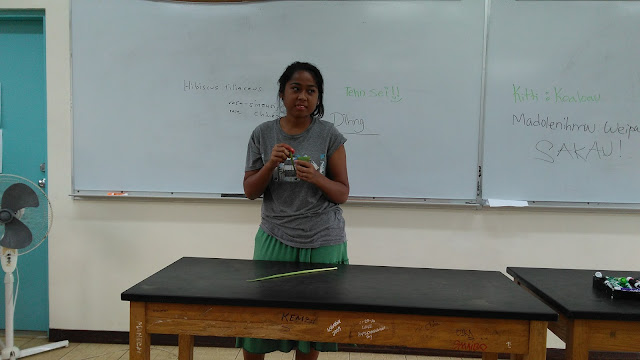 Emerika claimed that the leaf of dihng, Cordyline fruticosa, also staunches blood flood from a cut. The use of which I am aware as being more common is the antipyretic effect of the leaf when applied to the skin, often done by making a bed of leaves to lay on. 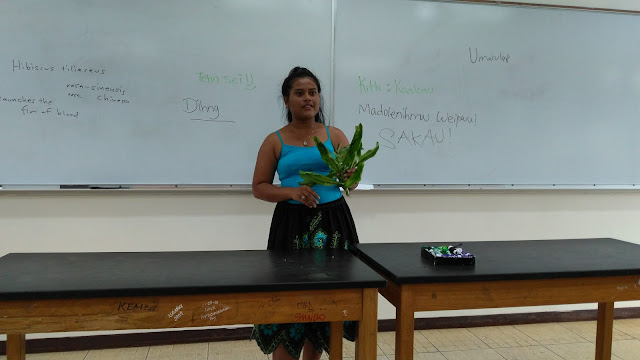 Sandralynn described the use of remek to treat menstrual pain and to help clean out the uterus during menses. The leaves are pounded and squeezed to produce a juice that one drinks for four days. 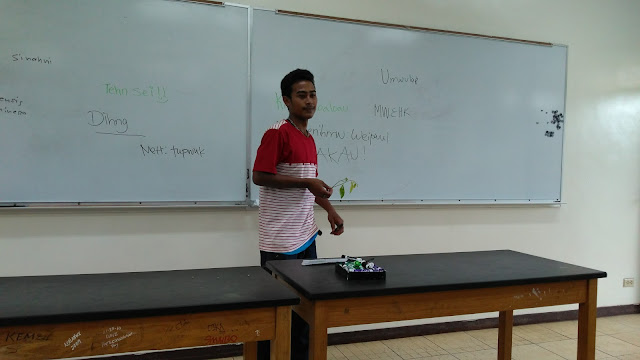 Jamie brought in mwehk, Glochidion ramiflorum, describing an interesting treatment not for people but puppies. To make a puppy grow faster, the leaves and fruit are masticated (chewed) and then "spit" into the puppies mouth. 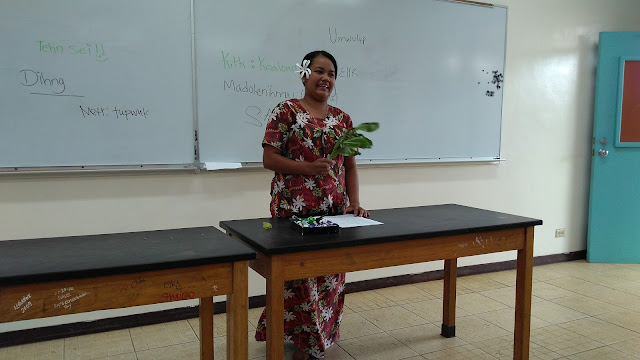 May-me noted the use of nnét in Chuuk, Scaevola taccada, to treat bloating during a women's period. The leaves of Scaevola taccada and Psidium guajava are boiled in water to produce an infusion. The leaves are removed and the indusion is put into a basin. The patient then sits in the basin and soaks in the infusion. 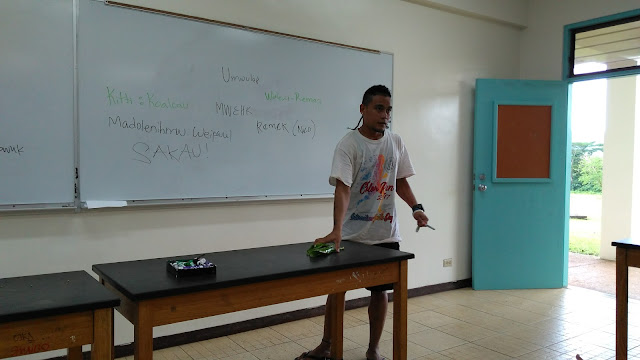 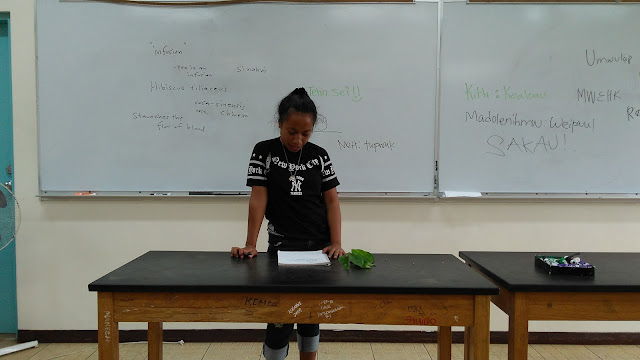 Harriet brought in tehn sei, Annona muricata, and described the application of the leaf to skin eruptions. 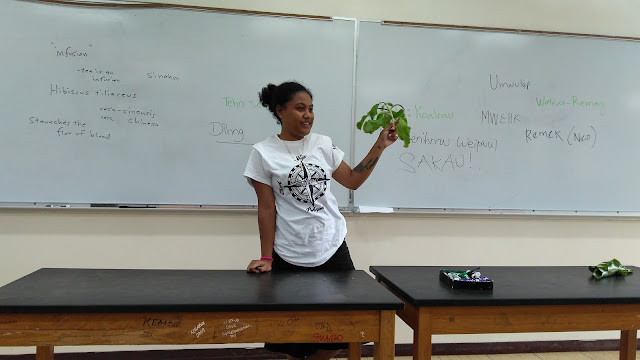 Kira brought in Bryophyllum pinnatum, a plant that has as a synonym Kalanchoe pinnata.  I had seen this plant in the past, but Kira is the first medicinal use of the plant that I can recall. Kira is from Woleai where the plant is used to treat burns. She noted that the timing of the application and the duration of the application are critical to successful treatment of a burn. The use sounds similar to that of Aloe vera. On Woleai the plant is known as defeiyalo fisingegeo. 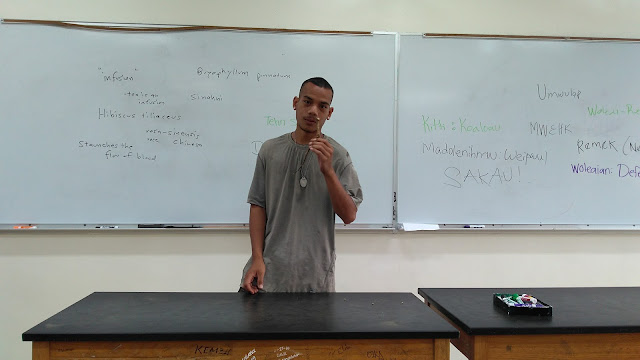 Shane noted that the tuberous root of Piper methysticum also staunches bleeding. Over the years I have come to conclude that staunching bleeding was a commonly required treatment. 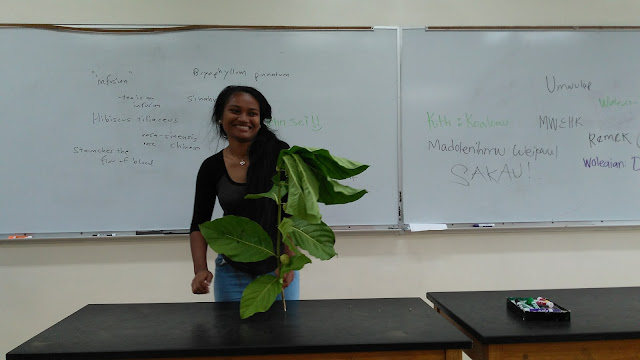 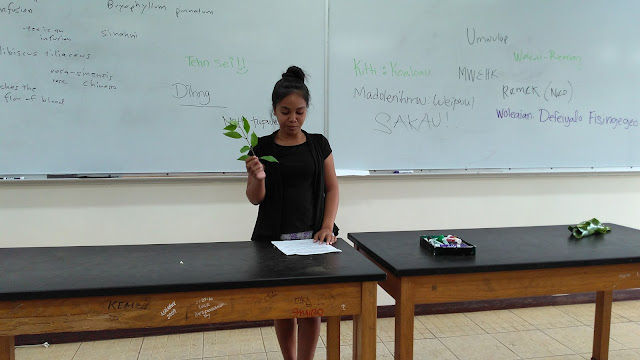 Shanaleen brought in Volkameria inermis, noting the use of the plant to cure soumwahu en naniak, the healing of people possessed by evil spirits. The specifics were not shared.
ethnobotany