August 22, 2017
A sexual harassment survey of 24 questions was distributed to a convenience sample of 46 students in a college statistics class. The 46 students surveyed included 24 females and 22 males. The course has 60 students enrolled, predominantly listing their state of residence as Pohnpei. The unmarked blue sliver is a single student from Chuuk. 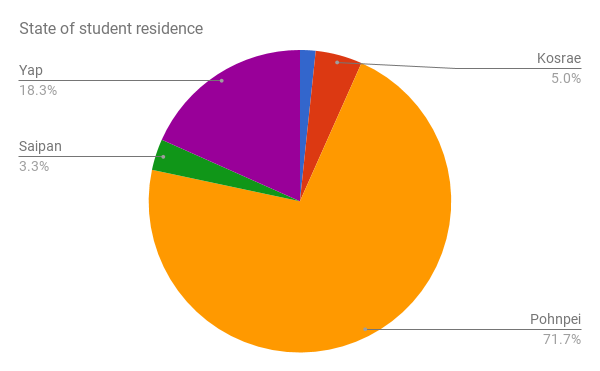 The survey was anonymous, thus there is no way to determine the actual state breakdown for the 46 students surveyed. The students were asked, "Which of the following do you believe is sexual harassment? (mark all that apply)"

The prompts are listed in descending order from those prompts which obtained the most marks to the least marked items. Of note is that even forced sexual acts were not deemed sexual harassment by all 46 respondents. The survey did not seek to determine whether some students might have been separating sexual harassment from criminal sexual activity such as rape.


Other prompts of note were that only 63% of the respondents felt that attempting sexual activity with someone who is under the influence of alcohol was a form of sexual harassment.

All of the items are open to interpretation. For example, only 28% of the respondents felt that whistling or hooting at a student of the other gender was a form of sexual harassment. An informant who did not take the survey noted that this might be misconstrued as there are some types of hoots used to call to another person in some of the cultures. Anecdotally, there does seem to be a clearly distinguishable difference between a cultural calling hoot and a sexually loaded "wolf" whistle, a difference the students appear to be keenly aware of.

At the top the table are prompts that females differentially identify as harassing, the bottom are prompts which males perceive as more harassing. That zero is not in the middle of the table reflects that females tended to find prompts as harassing more often than males on an overall basis. These is also a small amount of bias in that 24 females were sampled versus 22 males. Thus a difference of +1 or +2 may only reflect this sample size difference.

The table suggests that many males still consider sexual activity with an inebriated partner to be acceptable. Males also did not react as strongly to unwanted physical touching. The complex social dynamics of culture and family potentially play a role in these responses.

The prompt at the bottom of the list is curious. Five males felt that being in a private office with only one other person of the other sex was a form of sexual harassment. In contrast only one female felt this was the case. This author cannot explain this result, the survey did not probe any deeper.
comfsm health statistics